Neonatal sepsis is a major cause of death and complications despite antibiotic treatment. Effective adjunctive treatments are needed. Newborn infants are relatively deficient in endogenous immunoglobulin. Meta-analyses of trials of intravenous immune globulin for suspected or proven neonatal sepsis suggest a reduced rate of death from any cause, but the trials have been small and have varied in quality.

At 113 hospitals in nine countries, we enrolled 3493 infants receiving antibiotics for suspected or proven serious infection and randomly assigned them to receive two infusions of either polyvalent IgG immune globulin (at a dose of 500 mg per kilogram of body weight) or matching placebo 48 hours apart. The primary outcome was death or major disability at the age of 2 years.

In this trial, we found no difference in the primary outcome of death or major disability at 2 years of age among 3493 infants with suspected or proven neonatal sepsis who received either intravenous immune globulin or placebo during a 48-hour period. Similarly, there was no between-group difference in the individual components of the primary outcome or in seven other prespecified secondary outcomes, nor was there evidence of benefit or harm in 28 preplanned subgroup analyses according to risk factors for disease severity. These results clearly show that intravenous immune globulin, as prescribed in this trial, did not achieve the moderate improvements in outcome that were postulated. A larger trial would be necessary to show even smaller differences.20

We were unable to accurately determine the proportion of eligible infants who were recruited to participate in the trial. Infants were eligible if they were judged to have serious suspected or proven infection, and thresholds for study entry varied according to the center and the individual clinician, particularly since microbiologic evidence was not required. Indeed, waiting for microbiologic confirmation might have been inappropriate if there had been a chance that treatment with intravenous immune globulin at the onset of suspected sepsis could be effective.

Our study was similar to the earlier trials with respect to the dose of intravenous immune globulin used and the characteristics of the infants at the time of presentation with clinical sepsis. Compliance with the protocol was very high. The inclusion criteria were broad enough to include all groups of infants for whom a benefit of treatment might be hypothesized. The prespecified subgroup analyses included larger numbers of neonates than the existing meta-analyses of all neonatal data.

In three of the earlier trials, infants received a preparation of intravenous immune globulin that was enriched with IgM,21-23 so it might be argued that our study did not exclude a benefit with enriched immune globulin preparations. However, these three trials were small, and two of them were not randomized, placebo-controlled, or blinded. Four trials either did not use a placebo or were not blinded,21,23-25 and two were not randomized,21,26 so a key reason for the difference between our findings and those of earlier studies is likely to be the weaknesses in the designs of the earlier trials. This hypothesis is consistent with the results of a meta-analysis of 14 studies (of varying quality) of intravenous immune globulin in adults with severe sepsis, which showed a significant reduction in mortality. However, the largest trial showed no benefit, and when the analysis was restricted to this study and three others of higher quality, the odds ratio for death was 0.96 (95% CI, 0.71 to 1.3).14 It is important to emphasize that the findings from meta-analyses should be interpreted with caution when the underlying evidence is of variable quality.

An important feature of our study was its assessment of later disability as well as early mortality. Information about the outcome at 2 years was available for 97% of surviving infants. We used an accepted standard17 to define major disability and parental reports of children's development to assess cognitive ability because of the large numbers of children involved. The evaluation instrument that we chose, the PARCA-R, had been well validated in comparison with the Bayley II scale, and at the time the trial was initiated, we knew of ongoing work to further validate this measure in preterm survivors. However, for the cutoff points that capture the relatively small proportion of children with major disability, the existing validation work is based on a very small number of children (164). We therefore chose to use part of the trial population, before unblinding or analysis according to study-group assignment, to derive cutoff points for major and nonmajor disability, which we then used for the whole trial population. Sensitivity analyses that used the previously reported cutoff points did not show a significant effect on the study's conclusions (see the Supplementary Appendix). Although measures with better external validation are preferable for comparing children's development, the use of other approaches in randomized trials does not affect the internal validity of the comparison. In view of the relatively limited evidence to support a cutoff point of 44 on the PARCA-R to define severe cognitive disability, we considered our approach to represent a more accurate measure of the proportion of children with a major disability, since this analysis was based on data from 485 children.

On the basis of the established role of intravenous immune globulin in modifying the course of inflammatory conditions of the central nervous system in adults, we hypothesized that the immunomodulatory effects of intravenous immune globulin might extend to inflammatory injury in the developing brain or lungs.9 There was no significant between-group difference in any measure of central nervous system function, even when the analysis was restricted to preterm infants who were enrolled between 26 and 29 weeks of gestation. In this subgroup analysis, the absolute between-group difference in the risk of major disability was 6 percentage points, but the 99% confidence intervals included zero. Approximately two thirds of all neonates who were enrolled in the trial had a gestational age of less than 30 weeks at birth, and no significant difference was seen between the groups in the rates of oxygen dependency at 28 days.

In conclusion, we found that the use of polyvalent IgG immune globulin was not associated with significant differences in the risk of major complications or other adverse outcomes in neonates with suspected or proven sepsis. The prophylaxis and treatment of neonatal sepsis remain a major global priority,1 and there is a need to step up the testing of promising interventions in large international trials.27 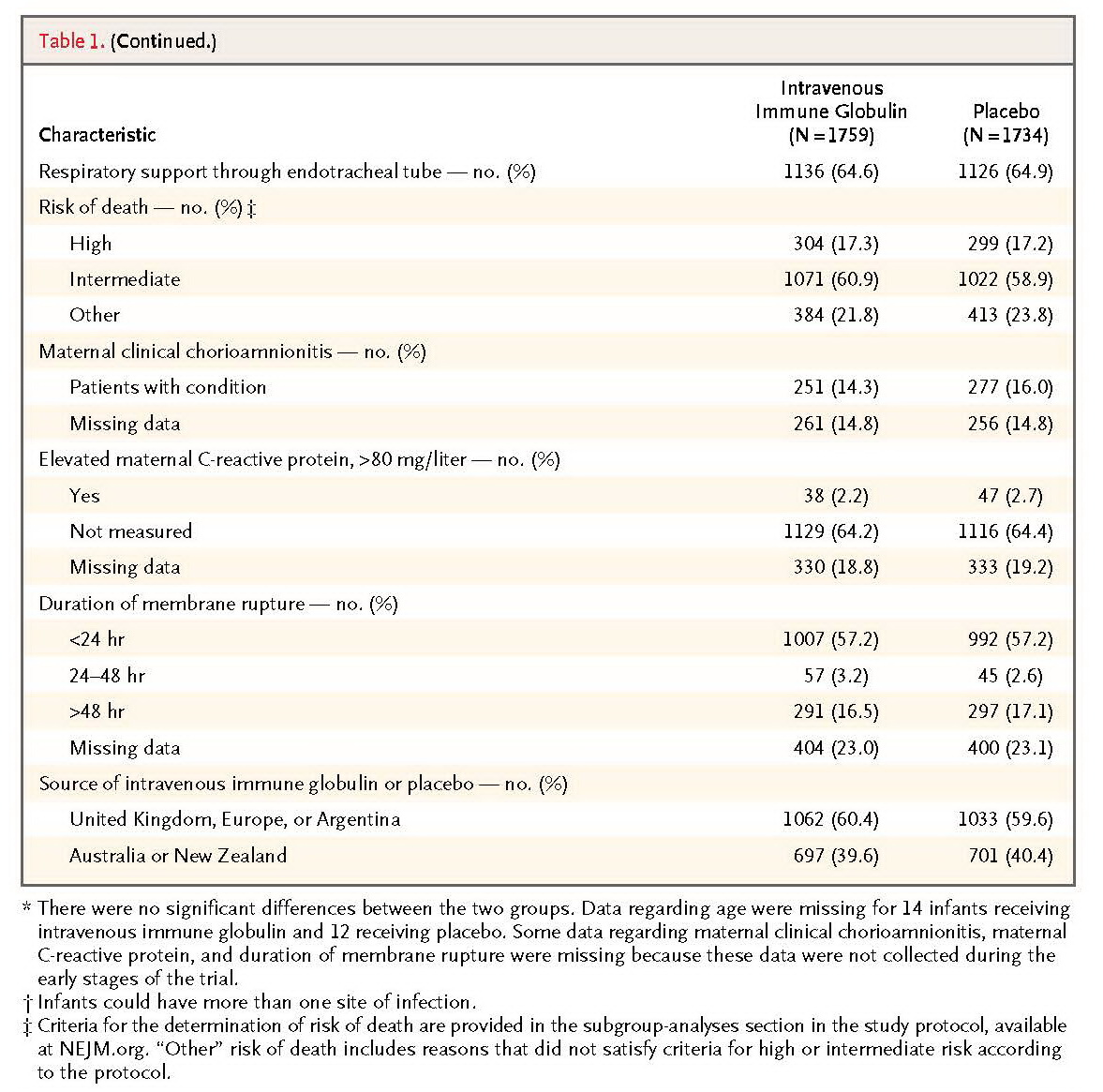 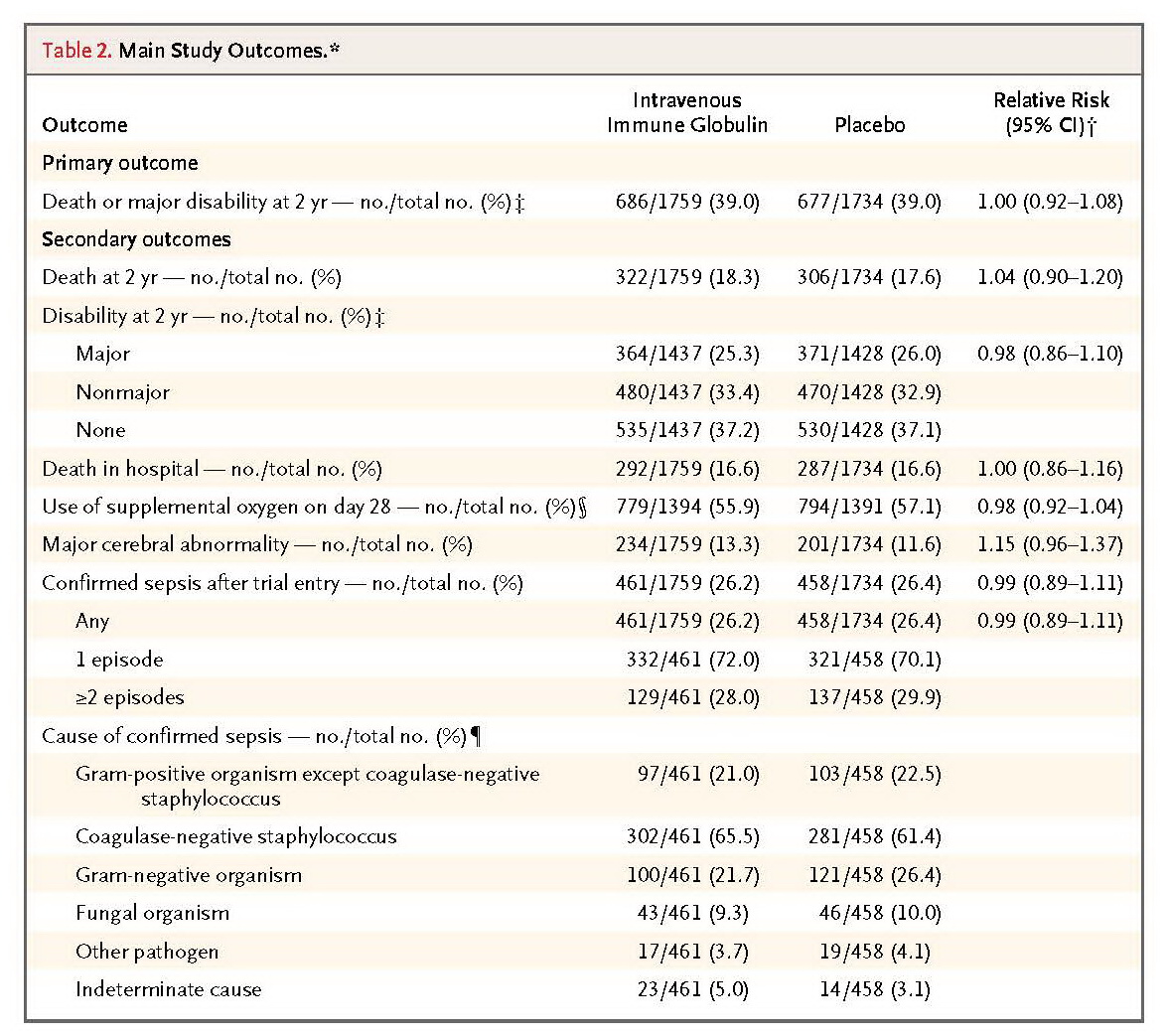 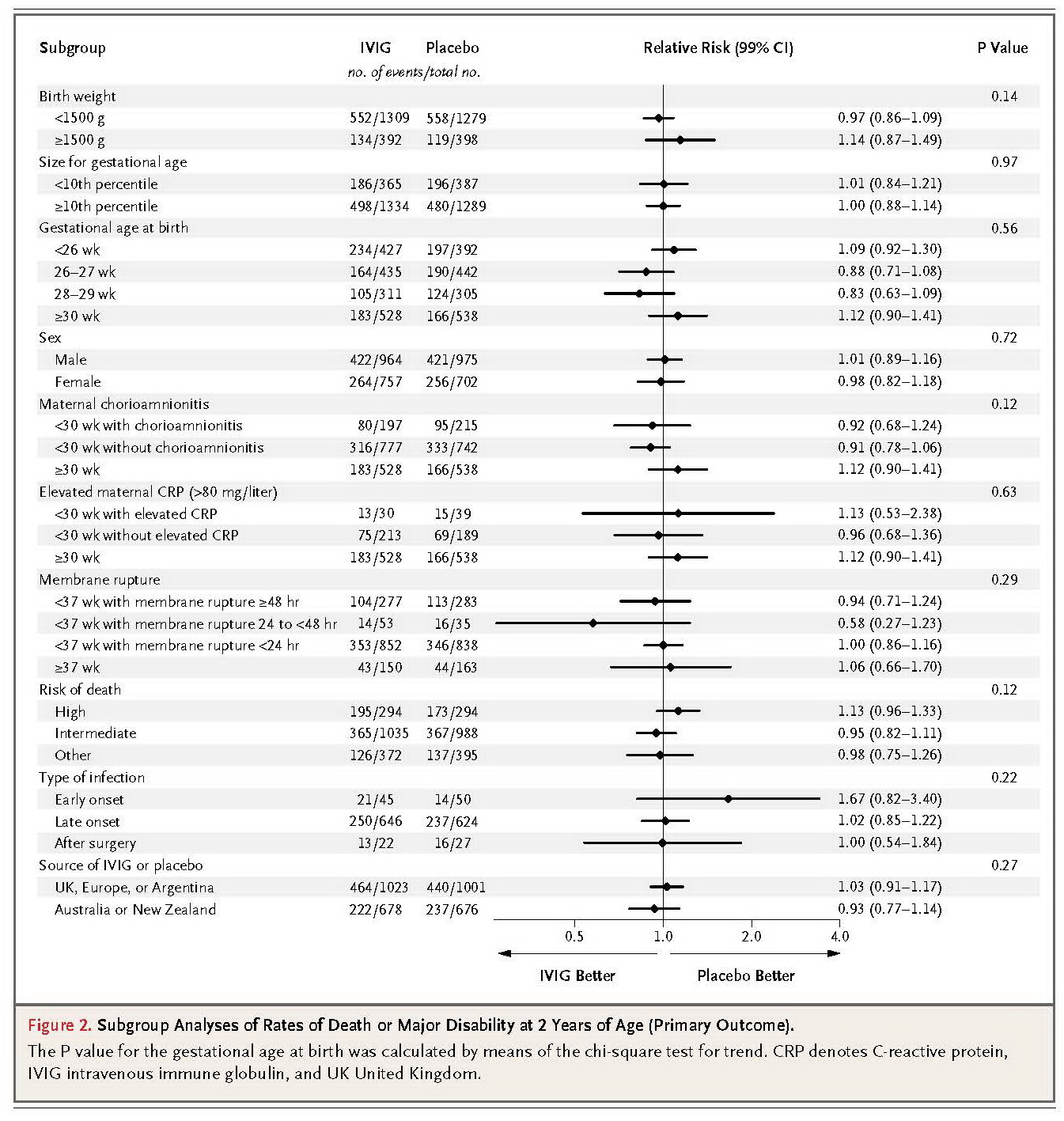 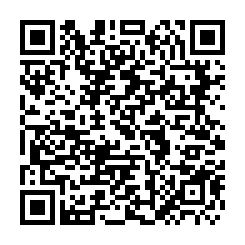