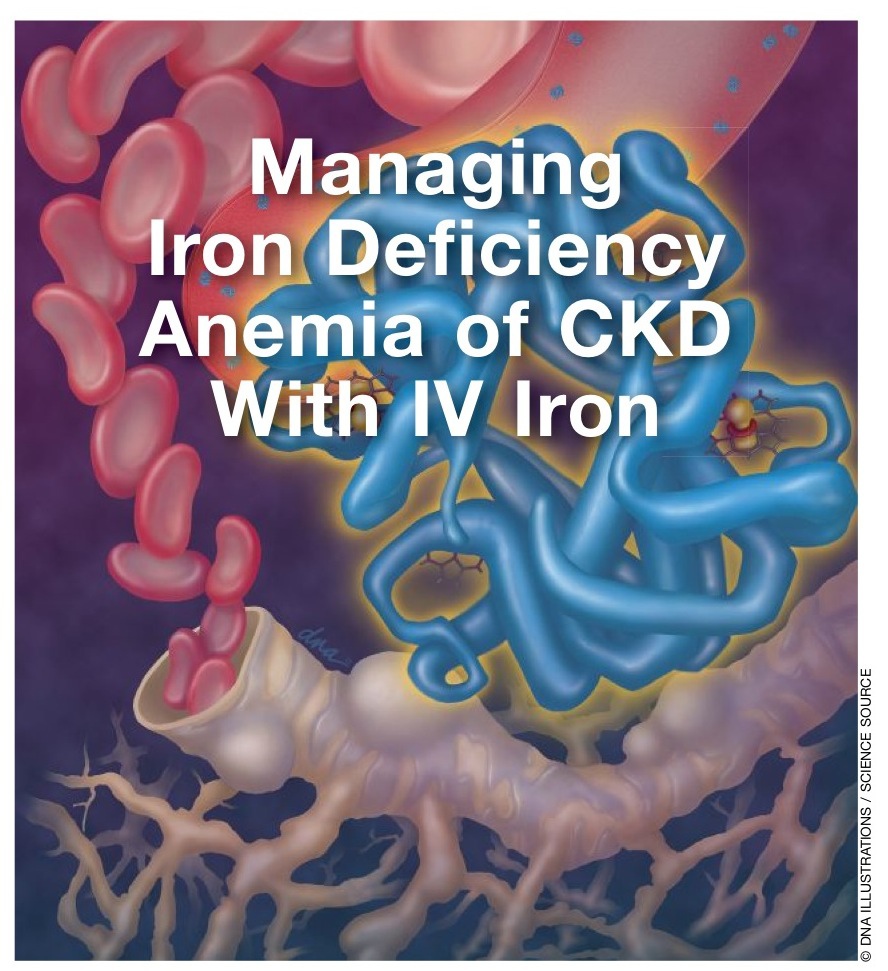 ABSTRACT: A prevalent complication of chronic kidney disease (CKD), especially in dialysis patients, iron deficiency anemia (IDA) continues to be underdiagnosed and undertreated. The main causes of IDA in this population are reduced intake and impaired intestinal absorption of dietary iron, blood losses, chronic inflammation, and increased iron requirements during therapy with erythropoiesis-stimulating agents (ESAs). The addition of IV iron can relieve iron-restricted erythropoiesis and improve ESA response, as well as balance the risks of ESA therapy. Clinical guidelines for anemia of CKD include recommendations for the use of IV iron. There are a number of factors to consider when managing anemia of CKD, and the various forms of iron are not identical.

A prevalent complication of chronic kidney disease (CKD), particularly in dialysis patients, iron deficiency anemia (IDA) remains underdiagnosed and undertreated. This article presents an update on the diagnosis of IDA and the management of IDA with various forms of IV iron.

The World Health Organization defines anemia as a hemoglobin (Hgb) level of <13 g/dL in men and <12 g/dL in women.1 In the United States, iron deficiency is the most common cause of anemia. A deficiency of iron in RBCs reduces tissue oxygen delivery, increases cardiac output, and may result in ventricular dilation and hypertrophy, if left untreated.2 The main causes of iron deficiency are increased demand for iron, iron loss, and—frequently the case in CKD—decreased iron stores, reduced iron absorption, or inflammatory iron block.

Anemia of CKD may be due to insufficient production of erythropoietin by diseased kidneys, diminished RBC survival, iron or vitamin deficiencies, bleeding diathesis, hyperparathyroidism, chronic inflammation, or comorbidities.2,3 Iron deficiency also can develop in hemodialysis (HD) patients receiving erythropoiesis-stimulating agents (ESAs), which cause an increased demand for iron; blood loss from dialysis is another cause of iron deficiency.4 Diabetic patients are at increased risk for anemia, and anemia itself is an independent risk factor for CKD.5,6

Because both early-stage CKD and anemia are usually asymptomatic, renal and hematologic laboratory values should be monitored annually in patients at risk.2,3,8 As glomerular filtration rate (GFR) decreases with progressive CKD, the risk of anemia increases from approximately 27% in stage 1 CKD to 76% in stage 5 (GFR <15 mL/min).5,9

Transferrin saturation (TSAT) and ferritin values help determine the presence of IDA (TABLE 1). Absolute IDA—in which TSAT is <20% and ferritin is <100 ng/mL—refers to the depletion of iron stores that occurs when there is insufficient iron to produce Hgb. Functional IDA (elevated ferritin and TSAT <20%) may develop during ESA therapy owing to inadequate mobilization despite sufficient stores to keep up with RBC production during erythropoiesis.10,11 Failure to reach target Hgb levels may occur despite large ESA dosages.

Ferritin, a nonspecific acute-phase reactant, is elevated in chronic inflammation. In the presence of CKD, ferritin cutoff values for both predialysis and HD are higher in functional IDA, at >100 ng/mL and >200 ng/mL, respectively. See TABLE 1 for other monitoring parameters (e.g., complete hematologic response) used during iron therapy.5,11

Despite its benefits, ESA therapy is associated with an increased risk of adverse drug events (ADEs) such as cardiovascular (CV) complications, hypertension, RBC aplasia, and development of antierythropoietin antibodies. Three trials (CHOIR, CREATE, and TREAT) raised concerns about ESA therapy and its associated CV and mortality risks because of the higher Hgb levels in, and/or higher ESA doses administered to, hyporesponders.12-14 IV iron as an adjunct to ESA therapy has become standard treatment for optimizing Hgb status and reducing ESA dosing requirements. Up to a 70% reduction in required ESA dosage has been noted in patients receiving IV iron.15,16 However, iron underutilization has been reported in anemic CKD patients receiving ESA therapy.17

ADEs, drug interactions, and lack of adherence limit the use of oral iron therapy. For HD-dependent patients, who often have limited absorption of oral iron, IV supplementation is preferred.18 The 2006 and 2007 updates to the National Kidney Foundation Kidney Disease Outcomes Quality Initiative (KDOQI) clinical practice guidelines for anemia of CKD recommend that HD patients on ESA therapy receive IV iron supplementation to maintain a target Hgb of 11 g/dL to 12 g/dL (not to exceed 13 g/dL). The guidelines also recommend that non–dialysis-dependent and peritoneal dialysis–dependent patients receive iron either orally or IV.19,20

Iron repletion should begin before initiation of ESA therapy. Iron levels should initially be monitored monthly until iron stores are replenished, then monitored quarterly. Smaller maintenance doses may be necessary after repletion, because Hgb optimization can occur in patients whose ferritin is >500 ng/mL. Overall clinical status, degree of ESA responsiveness, and other causes of increased ferritin (infection, inflammation) should be considered. Data are lacking regarding cessation of IV iron therapy. An increase in Hgb >1 g/dL over 1 month indicates a therapeutic response to iron therapy when IDA diagnosis in complex situations is unclear. Monitoring of iron levels also is important to avoid iron overload or toxicity and to prevent hemochromatosis from developing.5

IV iron formulations contain an iron core stabilized by a carbohydrate outer shell that maintains iron in a colloid form and controls its release. Formulations differ in iron core size and in the type and density of the surrounding carbohydrate shell. Pharmacokinetics differs across iron agents, with an inverse relationship between the strength of the iron complex and the rate of iron release. The stronger the complex, the more slowly bioactive iron is released, which may lead to free iron toxicity because of its lower potential to saturate transferrin.20 Iron-carbohydrate complexes in plasma are phagocytosed by the reticuloendothelial system, which degrades the carbohydrate shell; iron is stored as ferritin or transported out of the cell by an export protein. The exported iron binds to free sites on plasma transferrin, which delivers iron to transferrin receptors, and is then utilized in the formation of Hgb. Unutilized iron gets stored and, when needed, is released from the cell to undergo transferrin recycling.

IV iron products (see TABLE 2 for a comparison) are either dextran-containing or non–dextran-containing.21 ADE profiles of the various IV iron formulations are based on differences in molecular size, degradation kinetics, and bioavailability.22 There are concerns surrounding iron’s safety. 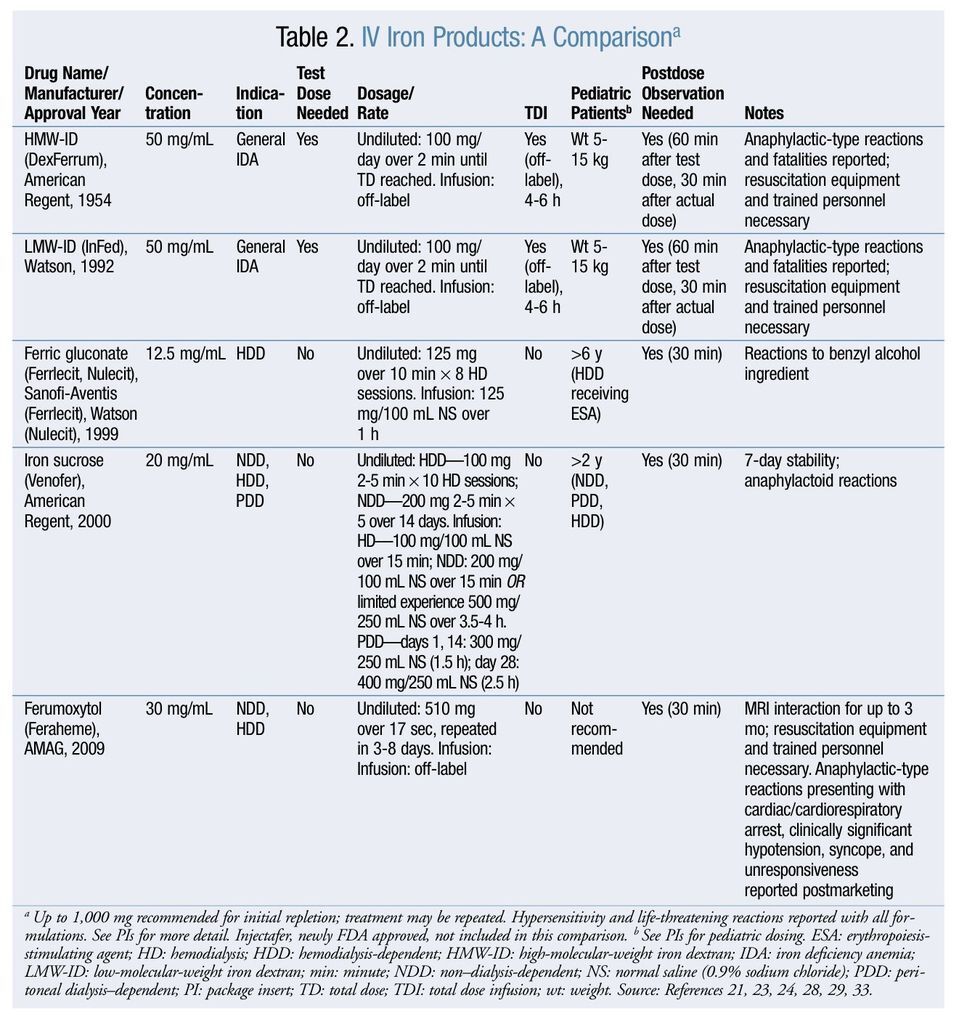 Iron dextran (ID) formulations carry a black box warning about fatal anaphylactic reactions, likely because of antibodies to the iron-carbohydrate or ID complex or the dextran component, particularly with high-molecular-weight ID (HMW-ID). The introduction of low-molecular-weight ID (LMW-ID) substantially reduces the risk of anaphylaxis. With ID therapy, test doses are required, along with an observation period for antibody reactions.23,24

Vasoactive reactions, which are due to the appearance of nontransferrin-bound or free (labile) iron in the circulation, include a drop in blood pressure, acute edema of extremities, and acute onset of diarrhea when large IV iron doses are administered rapidly.26 Small undiluted or infusion doses of LMW-ID are recommended; a total dose infusion (TDI) of 1,000 mg is possible, but it must be infused over 4 to 6 hours to avoid vasoactive reactions.27 Also, IV steroid premedication has successfully prevented these reactions.

TDI of iron sucrose and ferric gluconate is not recommended because the potential for vasoactive reactions and gastrointestinal symptoms increases with large doses. Smaller undiluted or infusion doses are recommended. Iron sucrose has broader FDA-labeled indications than does ferric gluconate (TABLE 2).28-31

There is concern about the increased risk of infection with IV iron use. Iron may serve as a growth factor for bacteria, inhibit phagocytosis, and increase oxidative stress. Withholding IV iron therapy in cases of acute infection may be prudent.37 If iron release exceeds binding capacity or if transferrin is oversaturated, toxic unbound iron acts as a catalyst in the formation of free radicals—believed to lead to coronary artery inflammation—and the development of atherosclerosis and long-term CV risk. Iron may also cause LDL oxidation, which is more damaging to the coronary arteries. Myocardial infarction occurring with the use of IV iron, hypothesized to be caused by elevated serum ferritin levels, also has been reported.38,39

Iron is a treatment option for anemia of CKD that can successfully balance the risks of ESA therapy. The KDOQI guidelines were updated in 2007 to reflect this. Pharmacists should be aware that there are a variety of factors to consider when managing anemia of CKD, and the various types of iron are not identical. 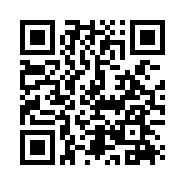