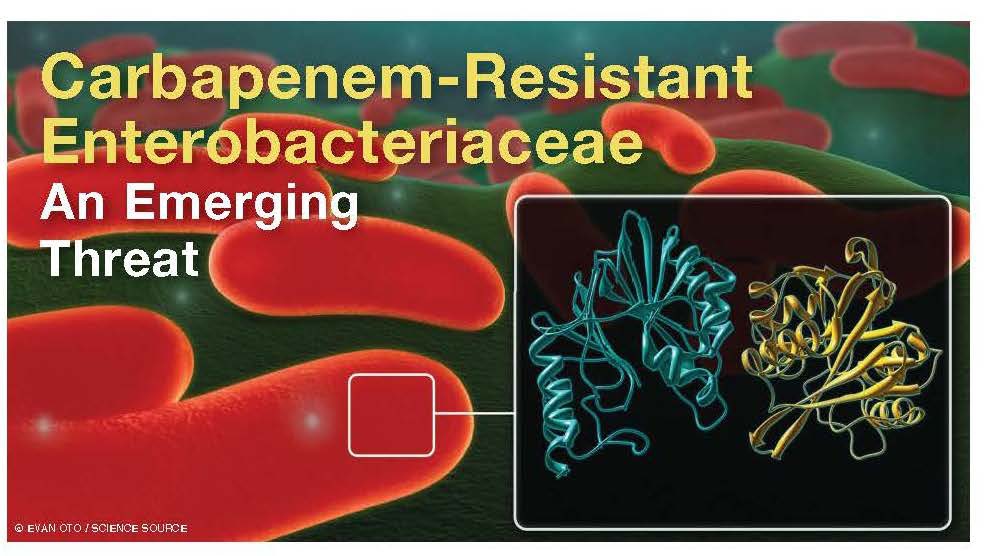 ABSTRACT: The carbapenem-resistant Enterobacteriaceae (CRE) comprise resistant gram-negative bacteria with limited treatment options and a high mortality rate. CRE infection is a growing threat, especially in the healthcare setting. The Clinical and Laboratory Standards Institute has defined laboratory indicators to determine the presence of CRE. Combination regimens including polymyxins, tigecycline, and aminoglycosides have been reported with limited success. Recommended prevention strategies are delineated by the CDC and should be implemented to thwart transmission of CRE. Pharmacists can optimize the management of patients with CRE infections by understanding the appropriate treatment and prevention measures for this emerging healthcare problem.   For several decades, clinicians have relied on the use of carbapenem antimicrobials to treat infections caused by resistant organisms. The development of resistance to broad-spectrum antimicrobials and the prevalence of carbapenem-resistant Enterobacteriaceae (CRE) in the United States have increased over the past 20 years.

Epidemiology
CRE infections pose a serious threat to public health due to high mortality rates, resistance to commonly used antibiotics, limited treatment options, and the potential for widespread dissemination. Mortality rates of 40% to 50% have been reported.1-3 In 2012, the CDC concluded that 4.6% of acute-care hospitals performing surveillance reported at least one CRE healthcare-associated infection.4 According to the Meropenem Yearly Susceptibility Test Information Collection Program, meropenem-resistant Klebsiella pneumoniae increased from 0.6% in 2004 to 5.6% in 2008.5 Carbapenem resistance has been cited in up to 4.0% of Escherichia coli and 10.8% of K pneumoniae isolates reported to the National Healthcare Safety Network.6

Microbiology
Enterobacteriaceae represent a large family of gram-negative bacteria that includes genera such as Klebsiella, Proteus, Escherichia, and Enterobacter. The mechanism of resistance was initially reported among Enterobacteriaceae as overproduction of AmpC beta-lactamases or extended-spectrum beta-lactamases with porin mutations.7,8 The production of carbapenemases represents another more recent mechanism for carbapenem resistance among CRE. These enzymes have direct carbapenem-hydrolyzing activity.9 K pneumoniae carbapenemase (KPC) enzyme–containing isolates have been found to be resistant to all beta-lactam agents including penicillins, cephalosporins, monobactams, and carbapenems.10 In the U.S., the most common carbapenemase is KPC, an Ambler class A enzyme. Ambler class B metallo-beta-lactamases (MBLs) have also been identified in the resistance to carbapenems. MBLs among Enterobacteriaceae are rare in the U.S. and include Verona integrin-encoded (VIM), imipenemase (IMP), and New Delhi metallo-beta-lactamases (NDM-1).
Risk Factors
Risk factors including exposure to antimicrobial therapy and the healthcare environment are strongly associated with CRE transmission.11 Fluoroquinolones, which are associated with multidrug-resistant Pseudomonas aeruginosa and Acinetobacter baumannii, have also been identified as a risk factor for carbapenem-resistant K pneumoniae (CRKP) infection.11-13 Falagas et al identified an association between antipseudomonal penicillins (P = .004), fluoroquinolones (P <.001), carbapenems (P = .01), and glycopeptides (P <.001) and CRKP infection.12 Prior fluoroquinolone and carbapenem use also have been identified as significant independent risk factors for CRKP infection.11 Postacute care facilities may represent reservoirs for the dissemination of CRE.14 Independent risk factors for CRKP carriage also include prolonged length of stay, sharing a room with a known carrier, increased frequency of known carriers on the ward, medical-surgical ICU stay, recent surgical procedures, mechanical ventilation, recent organ or stem cell transplantation, and central venous catheterization.1,14-16
Symptoms associated with CRE infection vary and correlate with the infected site. If an infection is present in the lungs or bladder, patients will present with a cough or urinary symptoms, respectively. Generalized signs and symptoms of infection are also seen in those with CRE infection. Most of the CRE infections involve the urinary tract. However, CRE can lead to infections in the bloodstream or present as intra-abdominal infections or ventilator-associated pneumonia.17

Diagnosis
The surveillance definition of CRE according to the Clinical and Laboratory Standards Institute (CLSI) is Enterobacteriaceae nonsusceptible to a carbapenem and resistant to all of the following third-generation cephalosporins that were tested: ceftriaxone, cefotaxime, and ceftazidime. Recently, new interpretive criteria (breakpoints) have been implemented to add doripenem and to include increased ertapenem sensitivity in determining susceptibility to carbapenems among Enterobacteriaceae (TABLE 1).18,19 An agar diffusion test should be utilized, and ertapenem or meropenem resistance should be considered resistance to the entire class of carbapenems.20 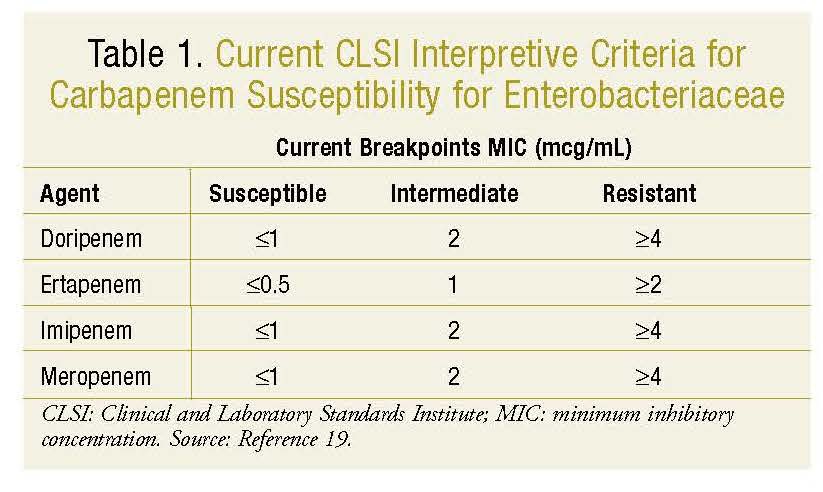 Anderson et al collected a sample of roughly 50 isolates from 13 different healthcare settings and reported the reference broth microdilution method as the most sensitive method for identifying KPC-mediated carbapenem resistance using meropenem, imipenem, and ertapenem compared to other laboratory methods.10 Ertapenem was the most specific regardless of which laboratory method was used and should be used for susceptibility testing when available.10 Although the lowered breakpoints no longer require further testing for carbapenemases, the CLSI recommends phenotypic testing for carbapenemase activity using the Modified Hodge Test (MHT) for any isolates producing carbapenemases that demonstrate decreased susceptibility to carbapenems in disk diffusion or minimum inhibitory concentration (MIC) testing.21 Clinical diagnosis is based on the presence of infection caused by CRE. CRE infection may occur in multiple possible sites, including the bloodstream, respiratory system, and urinary tract.22

Treatment
Treatment options for CRE infection are limited. Polymyxins, tigecycline, and aminoglycosides have in vitro activity against CRE.23,24 Polymyxins possess gram-negative activity and include polymyxin E (colistimethate) and polymyxin B. Polymyxins have been used less frequently due to nephrotoxicity and neurotoxicity safety concerns. However, the emergence of resistance has directed attention back to the use of this drug class. In vitro studies of polymyxins demonstrated bactericidal activity against KPC infections, and synergy in combination with carbapenems, rifampin, or tigecycline was observed.24-26 The most common combination treatment regimens used in case reports include polymyxin plus tigecycline, carbapenem, or aminoglycosides.
In a systematic review by Lee and Burgess, polymyxin monotherapy was associated with higher rates of treatment failure compared to polymyxin-based combination therapy (73% vs. 29%, P = .02).27 Reports of resistance to colistin among gram-negative bacteria have been described.28 Lee et al reported increased polymyxin B MIC values in 3 of 12 patients treated with polymyxin B monotherapy (1.5 to 32 mcg/mL, 0.75 to 12 mcg/mL, and 0.75 to 1,024 mcg/mL).29 Combination therapy with polymyxins may be an effective strategy to prevent resistance to colistin and to successfully treat KPC infections.
Tigecycline, a glycylcycline antimicrobial, has demonstrated an excellent spectrum of in vitro activity against KPC-producing organisms. In the SENTRY Antimicrobial Surveillance Program, tigecycline inhibited 100% of 104 carbapenemase-producing Enterobacteriaceae isolates collected worldwide.30 Some reports have described tigecycline resistance in Enterobacteriaceae, a treatment-emergent increase in tigecycline MIC, and cases of panresistant K pneumoniae.31-34 Tigecycline is a bacteriostatic agent, and an alternative antimicrobial should be considered if bactericidal activity is necessary. Urinary and serum levels of tigecycline are low, and its use for treatment of urinary tract infections (UTIs) and bloodstream infections as monotherapy is discouraged. Combination regimens using tigecycline have been cited in the literature.27
Aminoglycosides, protein synthesis inhibitors, exhibit concentration-dependent activity and good distribution into urine, bone, and peritoneal fluid.35 Multivariate analysis showed aminoglycoside use was independently associated with microbiologic clearance. In one retrospective cohort study, aminoglycosides had a higher rate of microbiologic clearance of CRKP in the urine (88%) compared to polymyxin B (64%, P = .02), tigecycline (43%, P <.001), or the untreated group (36%, P <.001).36 Cross-resistance to aminoglycosides has been noted and is due to the altering enzymes of many CRKP strains.37 The most frequently used aminoglycoside-based combination treatment regimens published in case reports included aminoglycosides in combination with polymyxins, carbapenems, fluoroquinolones, tigecycline, aztreonam, or tetracyclines. Several cases reported treatment success with combination therapy including aminoglycosides.27,38,39 The potential risk of nephrotoxicity should be considered, especially with the combination of aminoglycoside and polymyxin.27
Evidence comparing carbapenem monotherapy versus combination therapy showed higher rates of treatment failure with monotherapy (60% vs. 26%, P = .03).27 The most common treatment regimen used in previous reports was carbapenem with polymyxin, followed by carbapenem plus aminoglycoside, and carbapenem with a beta-lactam plus a beta-lactamase inhibitor.27 Bulik and Nicolau evaluated the combination of ertapenem and doripenem against KPC in both an in vitro chemostat model and an in vivo murine model.40 Enhanced efficacy of combination therapy in comparison to monotherapy was observed in both models.
The role of double-carbapenem therapy warrants further investigation. Carbapenem has time-dependent bactericidal activity, but whether this pharmacodynamic parameter is effective in the presence of KPCs is debatable.27 Some authors have suggested using high-dose prolonged-infusion carbapenems in a combination regimen for organisms with a carbapenem MIC ≤4 mg/L in the treatment of CRE infections. The recently lowered clinical breakpoints of carbapenems define susceptibilities to imipenem, meropenem, and doripenem as a MIC up to 1 mcg/mL and 0.5 mcg/mL for ertapenem.41

Evidence for combination therapy for the treatment of CRE infections is largely derived from retrospective and observational cases series. Combination therapy was associated with improved survival in a retrospective cohort study of patients with KPC-producing K pneumoniae bacteremia (TABLE 2).42 The majority of combination regimens with successful results included a polymyxin combined with either tigecycline or a carbapenem. In a multicenter, retrospective cohort study of 125 patients with bloodstream infections caused by KPC-producing isolates, a significantly higher 30-day mortality rate was observed among patients treated with monotherapy versus combination antimicrobial therapy (54.3% vs. 34.1%, P = .02).43 The triple-drug combination of tigecycline, colistin, and meropenem was significantly more common in the survivor group (P = .009). In one retrospective comparison of 55 patient cases, positive outcomes were observed in the majority of cases when tigecycline, aminoglycosides, and polymyxins were used in combination.44 Further clinical studies are needed to establish the effectiveness of combination treatment and which antimicrobials should be used in combination.

In vitro data suggest rifampin in combination with polymyxin B and/or doripenem may be a useful therapeutic option for carbapenem-resistant isolates; however, clinical studies are needed to elucidate the potential role of this drug in the treatment of CRE infections.24,45 Of note, fosfomycin, which is currently only available as oral powder for solution, demonstrates activity against approximately 50% of CRKP isolates.46,47 Because of the growing problem of multidrug resistance, reevaluation of the role of older antimicrobials and the development of new antimicrobials is needed to address the increasing incidence of CRE infections.
Prevention
Screening tools are vital in detecting unrecognized CRE colonization.18 Point prevalence surveys generally involve screening all patients in a ward or unit.18 Active surveillance cultures can be used as part of a comprehensive strategy to interrupt transmission of CRKP, and they involve patients who might not be epidemiologically linked to CRE patients but who meet certain prespecified criteria for being high risk (e.g., patients from long-term care facilities, patients admitted to the ICU).18,48 A 4.7-fold reduction in the incidence of CRKP infections following implementation of active surveillance with contact precautions was noted in a hospital outbreak.48
The CDC recommends eight core measures for control of CRE in acute and long-term care facilities (TABLE 3).18 The use of devices (e.g., central venous and urinary catheters) should be minimized and reviewed regularly for discontinuation when no longer necessary. Patients at highest risk for transmission should be housed in single-patient rooms or cohorted together. Appropriate use of antimicrobial agents through an antimicrobial stewardship is critical in controlling multidrug-resistant organisms.18,49 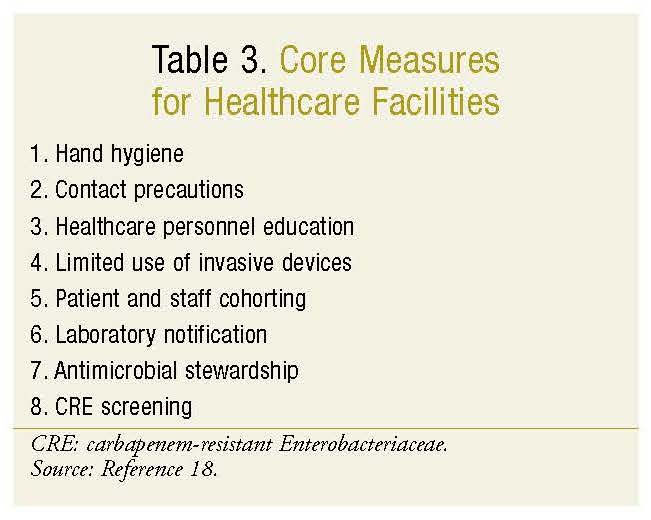 Regional surveys including facility level data such as facility demographics, overall frequency of CRE detection, and frequency of CRE cases by timing of detection are often utilized to prevent transmission from one facility to another. In regions where CRE is common, the collaboration of healthcare facilities is important to convey the urgency of the matter and to prioritize CRE prevention. All acute and long-term care facilities should review current infection control policies and practices and implement the core measures for CRE prevention.18,49
Conclusion
Due to the growing threat of CRE infections in the healthcare setting, it is important for pharmacists to be familiar with antimicrobial therapy options, risk factors, and diagnostic indicators. Prevention strategies should be incorporated at the healthcare system level. In light of limited data with current treatment options and growing resistance, development of new antimicrobials is needed. Pharmacists play a crucial role in providing optimal and appropriate treatment of patients with CRE infections. 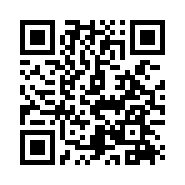