Mean MiniAQLQ scores increased by 0.8 to 1.0 point over a period of 2 years in both trials. At 2 months, differences in the MiniAQLQ scores between the two treatment groups met our definition of equivalence (95% confidence interval [CI] for an adjusted mean difference, –0.3 to 0.3). At 2 years, mean MiniAQLQ scores approached equivalence, with an adjusted mean difference between treatment groups of –0.11 (95% CI, –0.35 to 0.13) in the first-line controller therapy trial and of –0.11 (95% CI, –0.32 to 0.11) in the add-on therapy trial. Exacerbation rates and ACQ scores did not differ significantly between the two groups.

Study results at 2 months suggest that LTRA was equivalent to an inhaled glucocorticoid as first-line controller therapy and to LABA as add-on therapy for diverse primary care patients. Equivalence was not proved at 2 years. The interpretation of results of pragmatic research may be limited by the crossover between treatment groups and lack of a placebo group. (Funded by the National Coordinating Centre for Health Technology Assessment U.K. and others; Controlled Clinical Trials number, ISRCTN99132811.)

Mean improvements over a period of 2 years in both the first-line controller and the add-on therapy trials were substantially greater than the MID for questionnaire scores measuring asthma-related quality of life and asthma control. For patients receiving an LTRA or an inhaled glucocorticoid as first-line controller therapy, MiniAQLQ scores were equivalent at 2 months, but at 2 years, these scores did not meet our prespecified criterion for equivalence, since the lower boundary of the 95% CI was –0.35. Similarly, for patients receiving add-on therapy with an LTRA or LABA, MiniAQLQ scores were equivalent at 2 months but not at 2 years (lower boundary of 95% CI, –0.32). Our equivalence boundary of 0.30 was chosen to be conservative, within the 0.5 MID for the MiniAQLQ score.26 In both trials, secondary outcome measures were similar in the two treatment groups, including asthma control as measured by the ACQ score and the frequency of asthma exacerbations, RCP3 score, and clinic-measured PEF.

Although our findings suggest that there is little difference in real-world effectiveness between an LTRA and an inhaled glucocorticoid as first-line controller therapy and between an LTRA and a LABA as an add-on to an inhaled glucocorticoid, caution is needed in interpreting the results of these pragmatic trials. As noted by Temple and Ellenberg,8 active-control trials may have limited assay sensitivity. Moreover, study characteristics that tend to reduce observable differences between treatments, including nonadherence, use of concomitant therapy that could affect outcomes, and enrollment of patients who do not have the disease or who have spontaneous improvement, could all be operative in the present study. Specifically, the lack of a placebo-control group limits the ascertainment of effectiveness, and open-label treatment assignments, differential adherence, crossover between treatment groups, and the (intentional) enrollment of a heterogeneous real-world patient population could bias the results toward equivalence.

We considered but rejected the addition of a placebo group when designing the study, since we believe it would have been unethical to assign patients to placebo for 2 years. All enrolled patients had evidence of asthma-related impairment on the ACQ, the MiniAQLQ, or both and were considered by their physicians to need regular therapy for their asthma after a 2-week run-in period. In contrast, other long-term studies of asthma therapy that included a placebo group either enrolled patients with mild asthma35 or excluded patients if a delay in inhaled glucocorticoid therapy was judged by physicians to be inappropriate.36

Double-blind treatment, although ideal for internal validity, would have severely affected the external validity (applicability) of this study. First, not revealing treatment assignments to the patients and health care providers would have hampered our goal of assessing the effect of differential adherence to oral versus inhaled therapy under conditions of usual patient and physician behaviors and preferences. Second, it would not have been possible to charge typical prescribing costs, which might have affected adherence. Bias due to the lack of blinding would probably have favored prescription of an inhaled glucocorticoid and an add-on LABA because of clear positioning in U.K. guidelines regarding the use of these medications.

Adherence to an LTRA was better than it was to the other drugs in both trials, with adherence rates that were numerically higher in the first-line controller therapy trial (65%, vs. 41% for an inhaled glucocorticoid) and significantly higher in the add-on therapy trial (74%, vs. 46% for a LABA). Although such poor and differential adherence potentially reduces assay sensitivity (particularly when coupled with treatment crossover), thus biasing results toward equivalence, both poor and differential adherence rates are realities of real-world prescribing6 and thus part of the treatment effect. It is reassuring that the results at 2 months were similar to those at 2 years, since the 2-month time point represents a standard efficacy period with high adherence and minimal contamination associated with treatment changes. The 2-year time point better reflects the real-world effectiveness of the therapy chosen initially.

The crossover between treatment groups was regrettable but unavoidable, since this was a pragmatic trial and we allowed usual practice to occur. Treatment changes were made for more patients in the LTRA groups in both trials. This meant that, although the per-protocol results generally supported the findings in the intention-to-treat analysis, proportionately fewer LTRA-treated patients were included in the per-protocol populations.

We cannot rule out treatment failure as a reason for disparities in crossover. However, because LTRAs are not commonly prescribed in the United Kingdom as first-line or add-on antiinflammatory therapy, or not recommended as such by U.K. guidelines, it is possible that patients in the LTRA groups, on being reviewed by a clinician unfamiliar with the study, were switched to an inhaled glucocorticoid or add-on LABA according to normal practice protocol.10,29 Since 7 to 10 physicians work in the typical U.K. general practice, it was difficult for us to keep all physicians apprised of the study goals and the need to maintain the study therapies. Finally, in the case of treatment failure, there was no room for change within the treatment class for the LTRA groups, whereas the inhaled glucocorticoid could be changed or the dose could be increased.

Impairment of lung function among our enrolled patients was milder than that of patients in many randomized clinical trials because a forced expiratory volume in 1 second of less than 80% of the predicted value or 15% reversibility was not required for eligibility. Since there was less room for improvement in PEF values, this measurement had poor sensitivity. However, there was considerable room for improvement in other measurements, and in all treatment groups, substantial improvements were recorded in asthma-related quality of life (an unadjusted mean increase from baseline of 0.8 to 1.0 in the MiniAQLQ score) and asthma control (a mean decrease of 0.7 to 0.9 in the ACQ score).

The limitations of these active-control equivalence trials are difficult to quantitate.8 Comparisons with other studies are problematic because of differences in study design and patient populations; however, the baseline values and outcomes in our studies are crudely similar to those in the Gaining Optimal Asthma Control (GOAL) study37 and the Formoterol and Corticosteroids Establishing Therapy (FACET) study,38 and the outcomes in our study are better than those in the placebo group of the Optimal Management of Asthma (OPTIMA) study35 (see Table E28 in theSupplementary Appendix). Nonetheless, we cannot rule out regression to the mean, and study results could simply be a reflection of the inherent variability of asthma, since patients may have been recruited at a time when their asthma was unstable.

The ACQ score and exacerbation frequency are two key markers of asthma control recognized by international consensus.24 There were no significant differences between treatment groups in these measures for intention-to-treat or per-protocol population in either trial, although exacerbations were infrequent overall. Data for asthma-related quality of life and asthma control were available over a period of 21 months for 95% and 96% of the patients in the first-line controller and add-on therapy trials, respectively, which are completion rates higher than those in most long-term asthma-therapy trials.35,37,39

We designed these two pragmatic trials7 to maximize external validity (applicability or generalizability), with the goal of studying a heterogeneous real-world population. Although this approach limits the efficacy assessment, we believe it has the advantage of exploring a question that cannot be answered in more tightly controlled, randomized, controlled trials — namely, what is the real-world effectiveness of these proven therapies for the heterogeneous population of patients seen in practice, including those who smoke and those with coexisting conditions, poor adherence, or poor inhaler technique? Active smokers are typically excluded from clinical trials, but such patients accounted for almost one fourth of our study population, with smokers over 45 years of age representing about 9% of patients in both trials. Because we did not require evidence of bronchodilator reversibility, enrolled patients may have had a combination of chronic obstructive pulmonary disease (COPD) and asthma. We estimate that 3% of the study population had some degree of COPD, since reportedly, 25% of smokers over 40 years of age who are treated for asthma in clinical practice have COPD.40 Nonetheless, verification of the asthma diagnosis with spirometry would have been ideal, and there is clearly a need for better diagnostic standards in primary care.

Although our eligibility criteria allowed for patients as young as 12 years old to be included, few patients were younger than 25 years of age; thus, our findings apply only to adults. The standard deviation used in the power calculation is smaller than the observed standard deviation in our data, and we attribute this difference to the greater heterogeneity of our study population as compared with populations in previously reported studies33 — a factor that should be considered in future pragmatic trials.

The results of these two pragmatic trials suggest that an LTRA is equivalent to both comparison drugs with regard to the effect on asthma-related quality of life at 2 months in a diverse patient population with asthma. Equivalence was not proved at 2 years. Although the quality-of-life results, taken together with asthma control and other outcome measures, show little difference in clinical effectiveness between an LTRA and an inhaled glucocorticoid as first-line controller therapy and between an LTRA and a LABA as an add-on to an inhaled glucocorticoid, it is important to recognize that features of these pragmatic trials could produce a bias toward equivalence. Nonetheless, our findings suggest that caution should be applied in extrapolating results from randomized clinical trials to the broad population of patients with asthma who are treated in community settings. Clinical decision making can best be guided by viewing the results of conventional randomized, controlled trials in conjunction with the results of pragmatic trials.

Supported by the Health Technology Assessment Programme (project number 98/34/05), by Clement Clarke International for implementation of the study, and by unrestricted educational grants from Merck Sharp & Dohme, AstraZeneca, and Research in Real Life.

Disclosure forms provided by the authors are available with the full text of this article at NEJM.org.

We thank all the patients and their families for their participation and support during the study; the general practitioners, nurses, and administrative staff in the participating practices for their support and assistance; Julie Houghton, Emma Koro, Sasha Rust-Andrews, and Carole Bull of the research team; Dr. Alistair Lipp for advice on study design and delivery; Dr Mark L. Levy and Liz Wakerly for advice on the initial study design and implementation; Jon Bell for advice on peak-flow measurement; and Annie Burden for assistance with the statistical analyses. 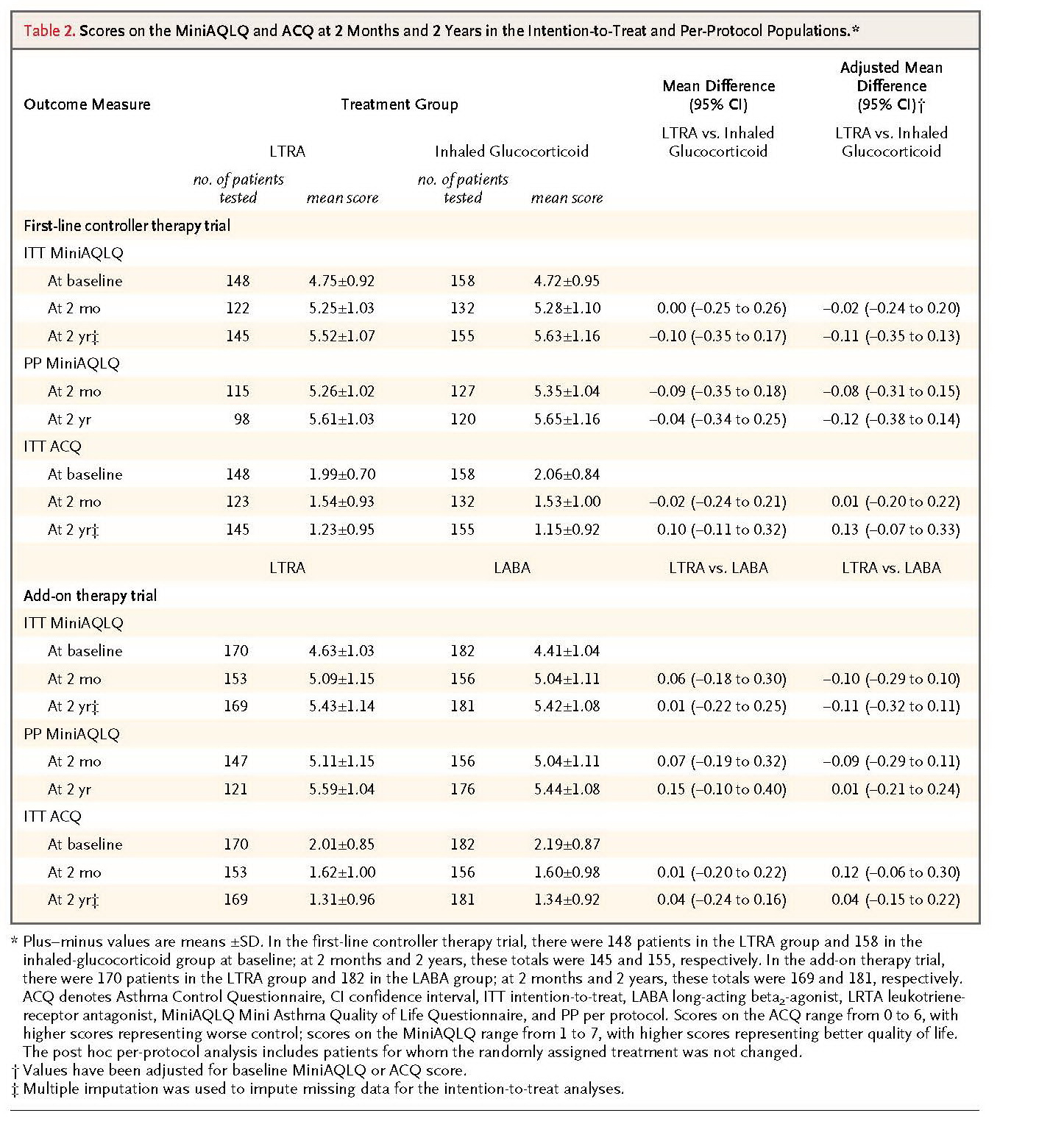 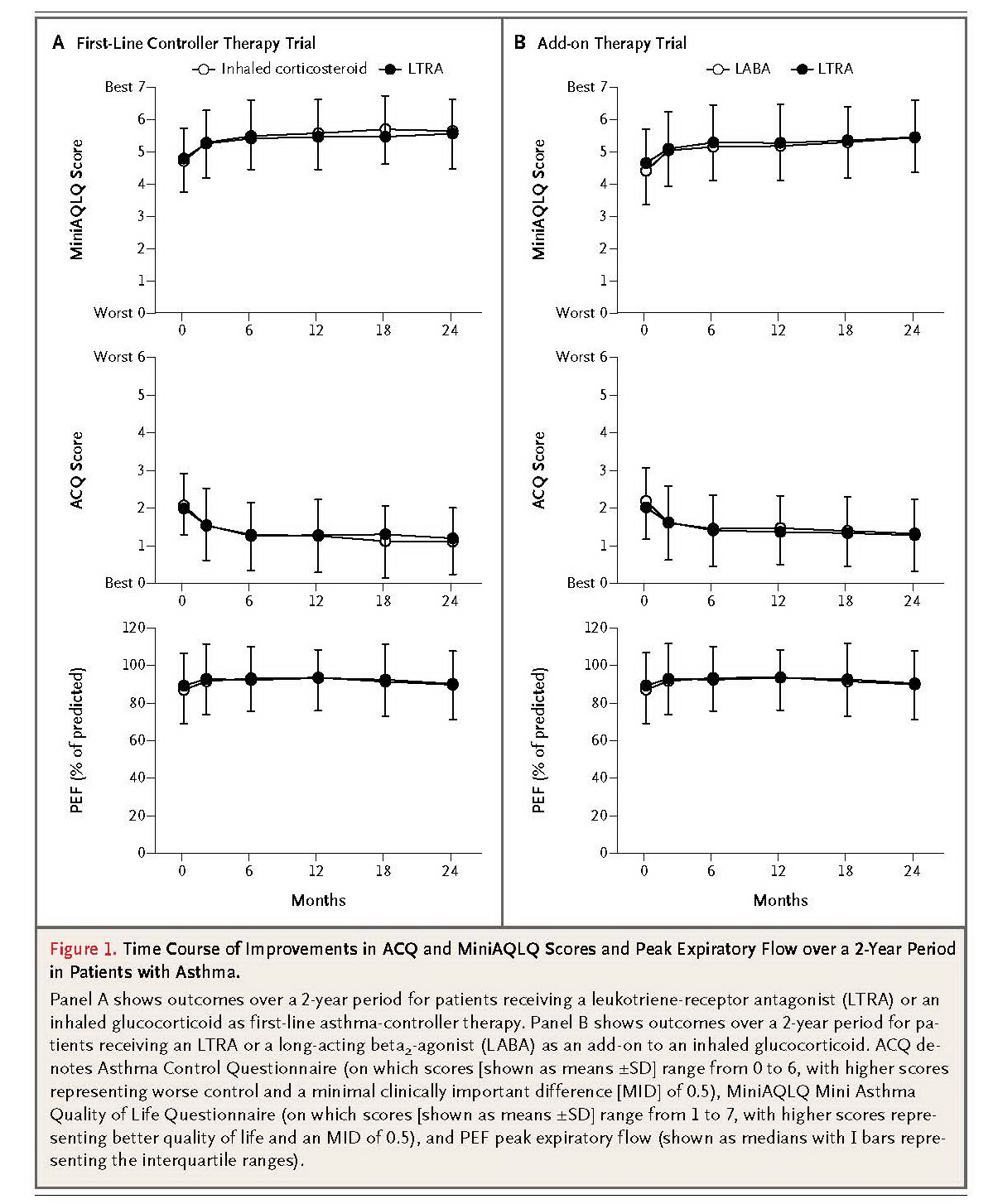 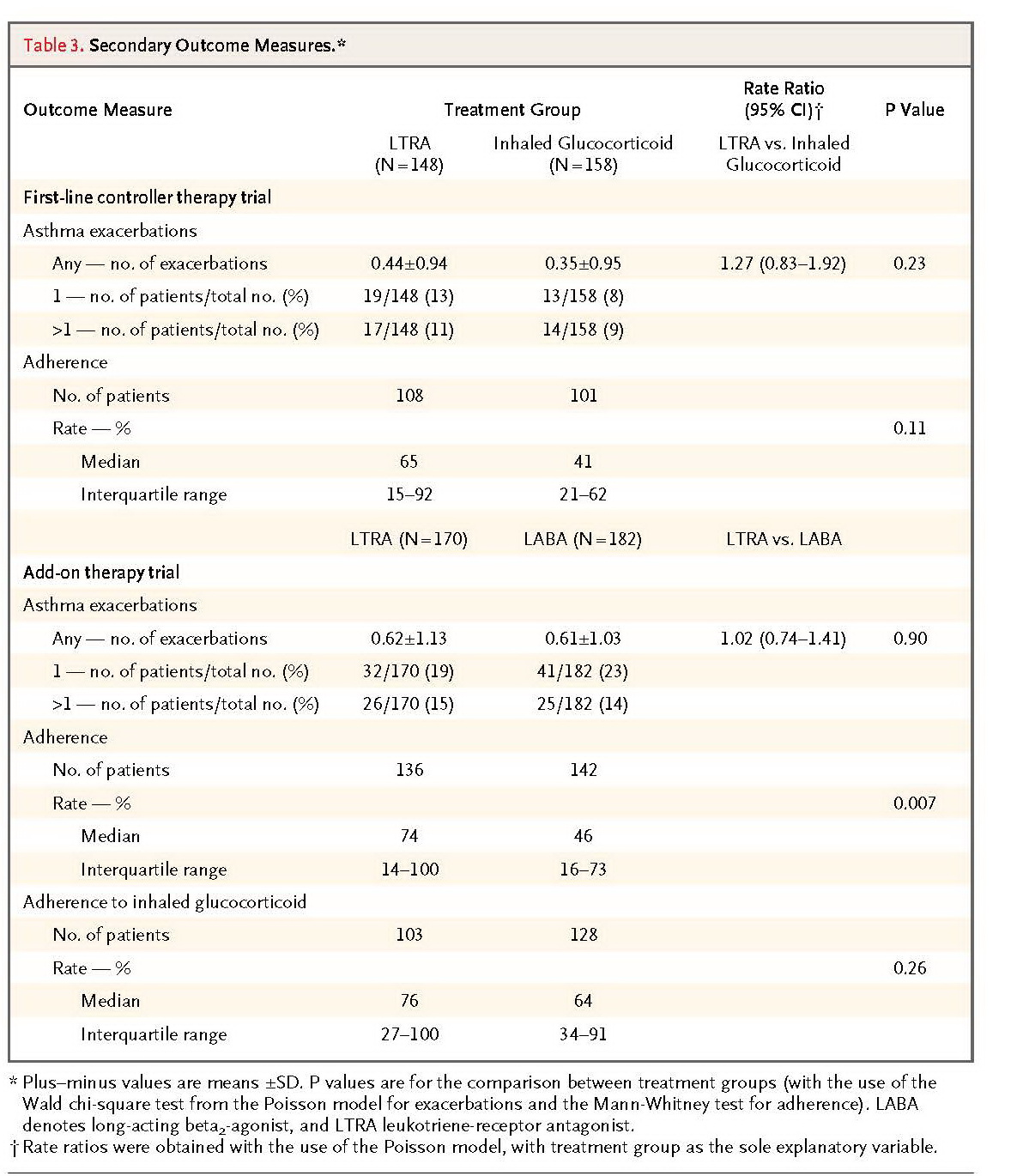 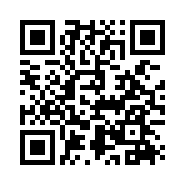