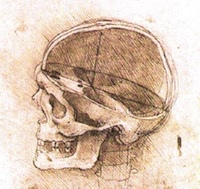 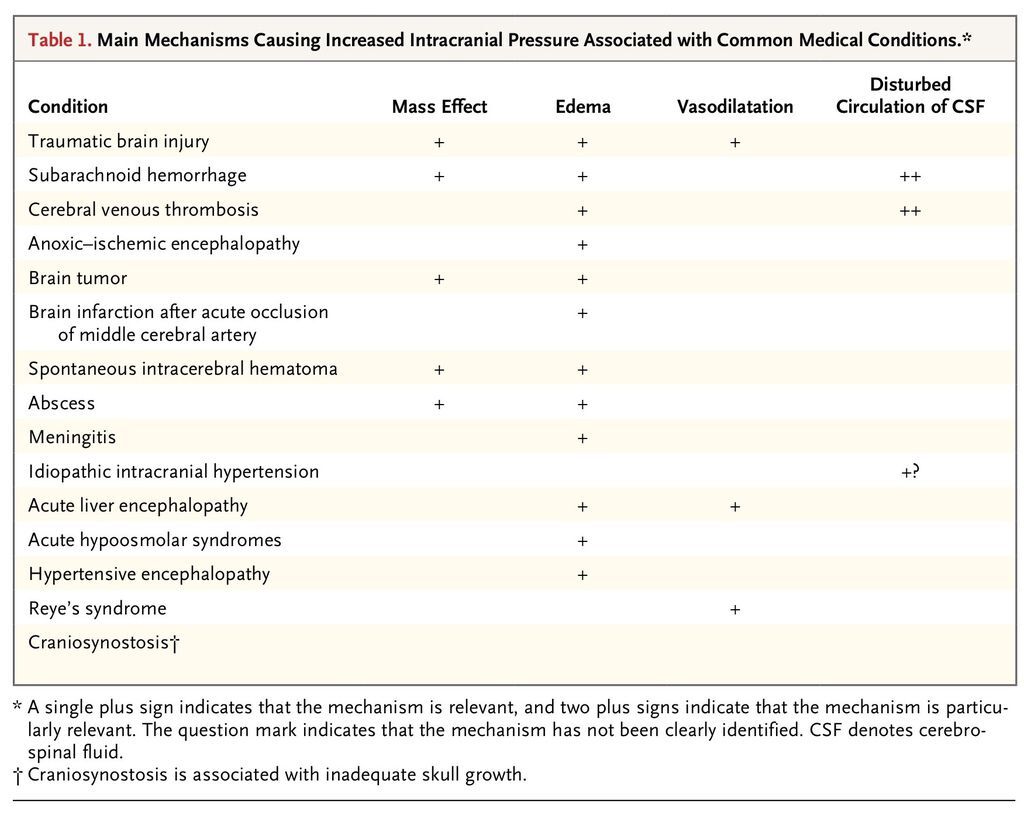 ). In this article, we focus on the increased intracranial pressure that occurs in patients after traumatic brain injury, since this is an area in which there are both physiological and clinical data.

Traumatic brain injury is a medical and social problem worldwide, with an estimated 10 million cases leading to hospitalization or death each year.1 In low- and medium-income countries, in which the use of motor-powered transportation is increasing, the incidence of this condition is rising2 and involves predominantly young men. In contrast, in richer countries, the epidemiology of traumatic brain injury is changing because of two main factors: the rate of traffic incidents is decreasing owing to successful enforcement of safety laws and preventive measures, whereas the aging of the population makes such injury in the elderly more frequent.2-4

Falls are a frequent cause of injury in older patients, often resulting in contusive brain injury. Elderly patients often have multiple coexisting illnesses and are frequently taking a number of medications, including anticoagulants and platelet aggregation inhibitors.4 These medications may contribute to the development of hematomas and hemorrhagic expansion of contusions. In the past, it was generally thought that traumatic brain injury in elderly persons was associated with a uniformly bad outcome, and as a consequence more aggressive treatment was often withheld.5 Although increasing age is unequivocally an independent predictor of a poor outcome,6 recent data suggest that favorable outcomes, at least in the short term, are no longer uncommon among elderly patients7; however, these patients require sustained, high-level medical care and rehabilitation.

Normal intracranial pressure in adults is below 15 mm Hg, with transient increases due to coughing or sneezing. Intracranial-pressure values that are sustained above 20 mm Hg are considered to be pathologic in adults and an indication for intensifying treatment in patients with traumatic brain injury. Under normal conditions, the total volume within the skull remains constant and is determined by the sum of the cerebrospinal fluid, blood, and brain-tissue compartments. The volume of these compartments is tightly regulated, and cerebral blood flow is kept constant by autoregulation. When additional volume is added to the system, compensatory mechanisms (e.g., displacement of cerebrospinal fluid to the spinal subarachnoid space and compression of the cerebral venous bed) operate to keep intracranial pressure constant. 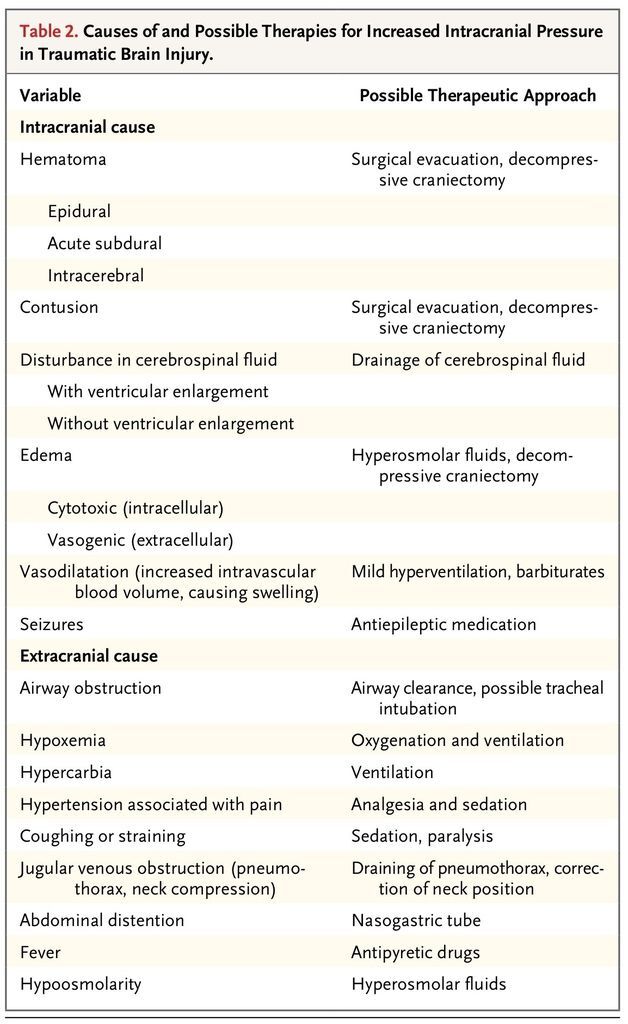 Causes of and Possible Therapies for Increased Intracranial Pressure in Traumatic Brain Injury.

). In the first hours after trauma, expansion of hematomas is the main threat,8 whereas in the following days, other mechanisms, including water accumulation, disrupted autoregulation, ischemia, and contusion expansion, lead to further increases in intracranial pressure.

The direct consequences of increased intracranial pressure on the brain can be broadly differentiated as mechanical or vascular. When a mass lesion develops, a pressure gradient originating from this area will cause distortion of brain tissue, midline shift, and displacement of the brain tissue in a medial or caudal direction (herniation) (Figure 1 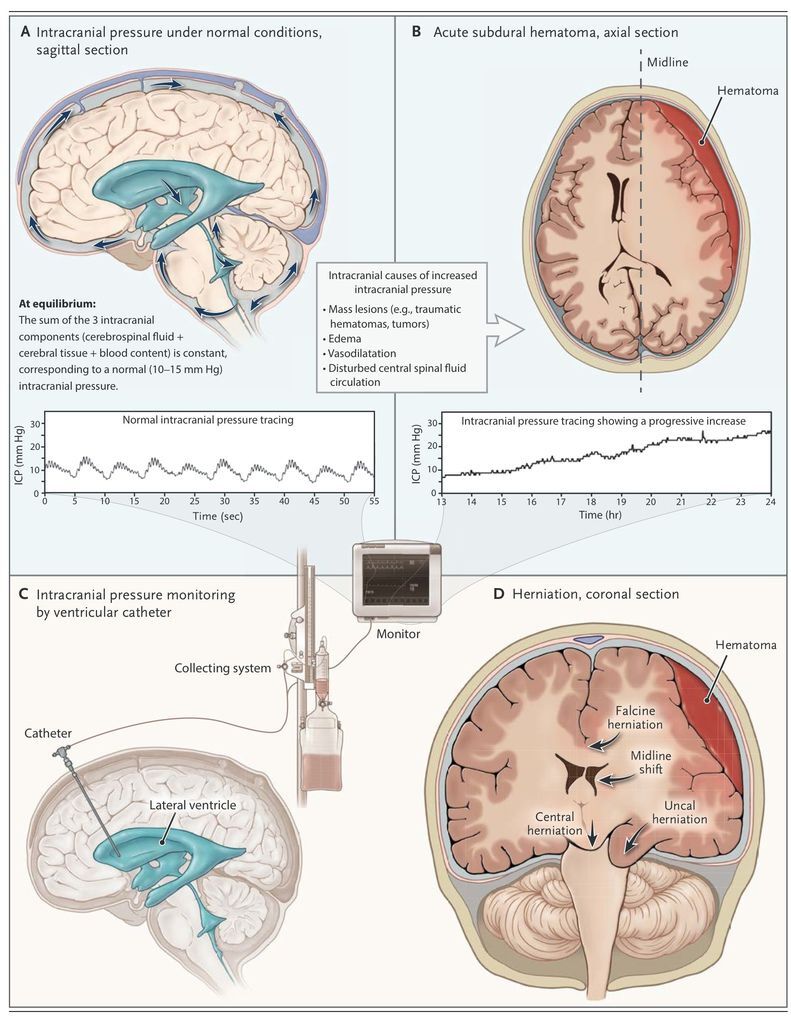 ). Herniation is a medical emergency, requiring prompt treatment to prevent irreversible and often fatal damage to the brain stem.

The practice of continuous monitoring of intracranial pressure started with the pioneering work of Guillaume and Janny in France14 and Lundberg in Sweden.15 A catheter, usually referred to as an external ventricular drain, was placed in the lateral ventricle and connected, through a fluid-filled system, to a transducer. This method is still considered the standard of care for the measurement of intracranial pressure. Noninvasive monitors of intracranial pressure currently have insufficient validation for clinical practice, but other invasive methods (e.g., intraparenchymal probes, microstrain gauge transducers, and fiberoptic catheters) are gaining in popularity because of their ease of use.16 These techniques, however, do not allow for drainage of cerebrospinal fluid, which removes an effective means of reducing intracranial pressure. Catheters may also be placed in the subdural space (e.g., after evacuation of an epidural or subdural hematoma); such techniques permit monitoring of intracranial pressure, but they do not permit drainage of cerebrospinal fluid, and measurements are less reliable than those obtained with an external ventricular drain.

International guidelines recommend the monitoring of intracranial pressure in all patients with survivable severe traumatic brain injury and abnormalities on computed tomography (CT) obtained at the time of admission,17,18 as well as in selected patients (e.g., those who are over the age of 40 years with hypotension or abnormal flexion or extension in response to pain) with a normal CT scan. The insertion of intracranial catheters carries risks of hemorrhage and infection. Ventricular catheters, with deeper brain penetration, are more risky. Reported rates of hemorrhage are variable (1 to 7% for ventricular catheters; less than that for intraparenchymal probes),19,20 and only rarely do such hemorrhages require surgical evacuation.18 Placement of an intracerebral catheter is relatively contraindicated in patients with coagulopathy (i.e., increased prothrombin time, partial thromboplastin time, or international normalized ratio or a platelet count of <100,000 per microliter).21 Routine cultures of catheter tips of external ventricular drains may reveal bacterial colonization, but fortunately the rate of invasive infection is lower than that of colonization.22 The risk of infection is higher with ventricular catheters than with parenchymal probes, with reported rates of infection ranging from 1 to 27%. Risk factors include longer duration of monitoring, the presence of an open skull fracture with leakage of cerebrospinal fluid, and leakage around the ventriculostomy site.22,23 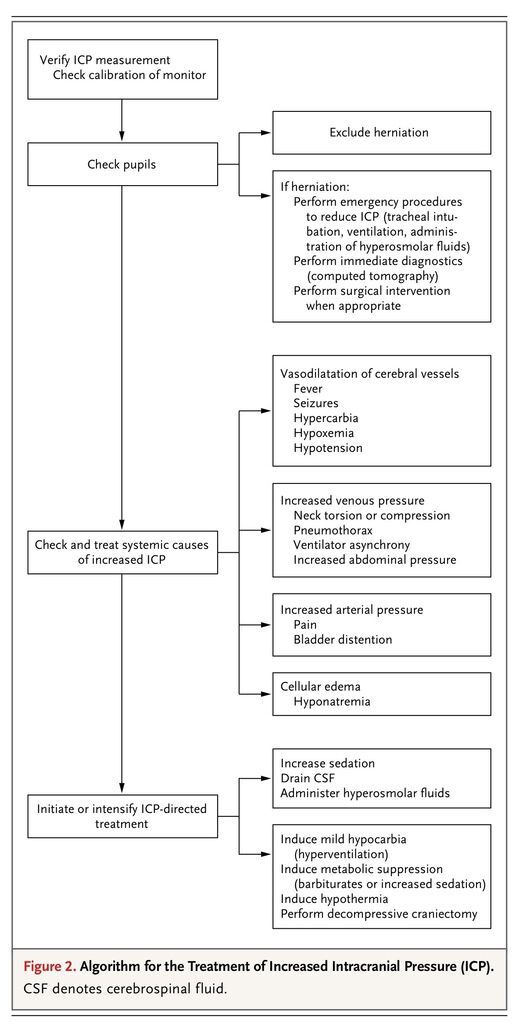 Algorithm for the Treatment of Increased Intracranial Pressure (ICP).

During the past 10 years, management of increased intracranial pressure has evolved toward standardized strategies that use a “staircase” approach with an escalating treatment intensity (Figure 3 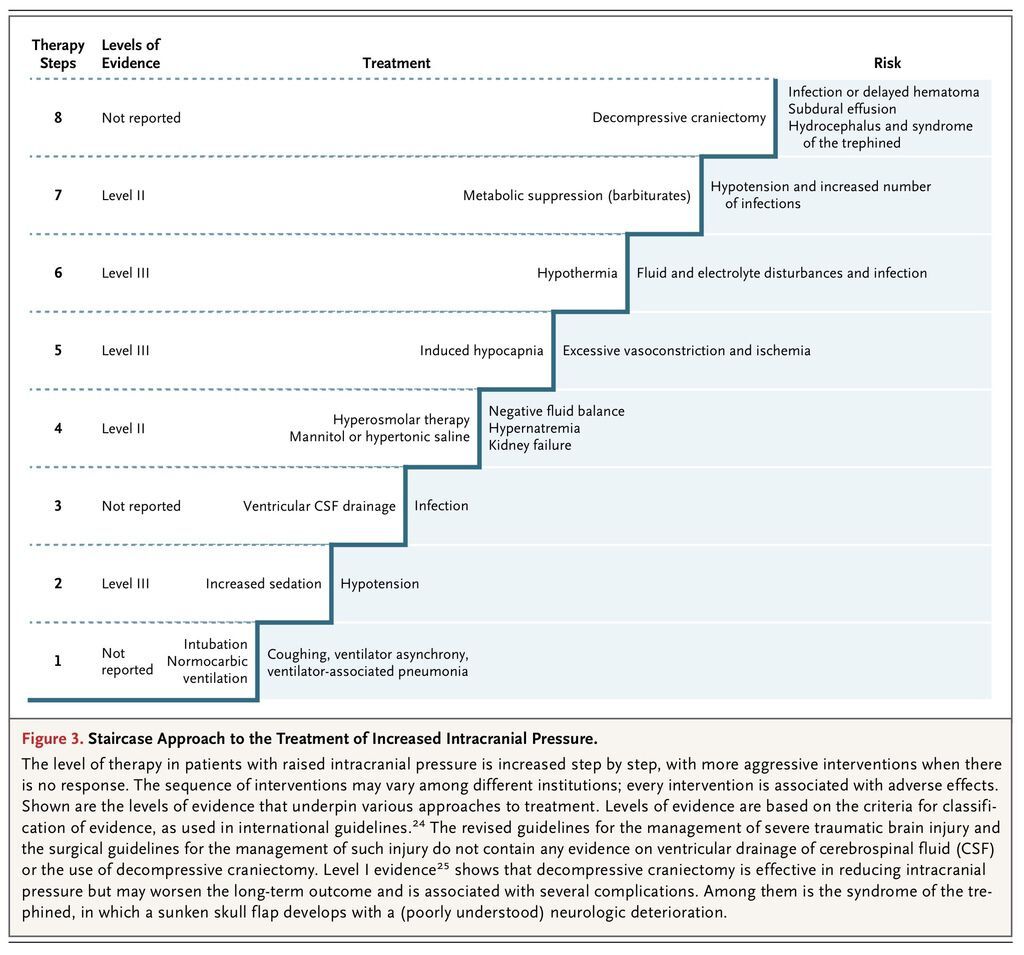 Staircase Approach to the Treatment of Increased Intracranial Pressure.

). 24,25 Sedation and analgesia are used to treat pain and agitation26 and to prevent arterial hypertension and patient–ventilator dyssynchrony. Sedation increases the risk of arterial hypotension resulting from vasodilatation, making maintenance of normovolemia a prerequisite. An additional advantage of sedation is to minimize the risk of seizures.27,28

Hyperosmolar agents reduce brain volume and intracranial pressure through multiple mechanisms. In the first minutes of infusion, mannitol and hypertonic saline expand the plasma volume, decrease blood viscosity, and reduce the cerebral blood volume.29 Once plasma osmolarity increases, a gradient across the blood–brain barrier is established, and water is extracted from the brain. This effect may last for up to several hours, until the osmotic equilibrium is reestablished. The integrity of the blood–brain barrier is a prerequisite for the efficacy of hyperosmolar agents. Mannitol is an osmotic diuretic and may cause dehydration and hypovolemia. Hypertonic saline may cause abrupt increases in the sodium plasma concentration. Comparisons between mannitol and hypertonic saline for the treatment of increased intracranial pressure have not shown a clear superiority of one option over the other.29

Barbiturates depress the cerebral metabolism and reduce cerebral blood flow, causing a proportional decrease in cerebral blood volume and a decrease in intracranial pressure. Initial enthusiasm for barbiturate therapy has been tempered by the recognition of serious side effects, including cardiac depression, arterial hypotension, and an increased risk of infection.32 The administration of barbiturates is generally reserved for refractory intracranial hypertension, after other therapies have been tried and have failed.12

Mild hypothermia (32 to 34°C) is effective in decreasing intracranial pressure,33 but studies on the clinical benefit are contradictory, and current evidence does not support its general use in patients with traumatic brain injury.34,35 The effects of hypothermia are complex, and adverse effects are a particular problem in patients with traumatic brain injury who may require cooling for many days to control refractory intracranial hypertension.

The surgical therapy of raised intracranial pressure includes the evacuation of mass lesions, drainage of cerebrospinal fluid, and decompressive craniectomy. Rapid detection and timely evacuation of an intracranial hematoma is a cornerstone in the management of traumatic brain injury. Guidelines on the surgical management of epidural or acute subdural hemorrhage and of brain contusions have been published, but all of them are based on class III evidence and are heavily focused on volumetric criteria.36 However, the surgical evacuation of an intracerebral or subdural hematoma may be motivated not only by volume or mass effect but also by mitigation of a toxic effect. In a study of experimental rodent models of cerebral contusions, Tanaka et al.37 found metabolic disturbances, with a massive increase in the production of excitatory amino acids and subsequent ischemic damage, in the cortex underlying blood clots. Possible benefits of surgical excision in the clinical situation are suggested by an analysis of 182 patients with cerebral contusions registered in the Japan Neurotrauma Databank.38 Currently, there are no data from randomized, controlled trials to support this approach.

A major asset of the study by Chesnut et al. is that it forms an incentive to rethink our concepts of the monitoring of intracranial pressure and the treatment of intracranial hypertension. The main intent of such monitoring is to better target early and specific therapy to the patients who may benefit most while not exposing others to unnecessary risks. This intent is in line with the concept that improved disease characterization will facilitate targeted management and individualized approaches.48 Furthermore, we should recognize that current treatments that are initiated in response to intracranial hypertension are simplistic and often ill-focused. Current protocol-driven approaches use a “one size fits all,” staircase approach with an escalating intensity of therapy, regardless of the underlying pathophysiological features. More individualized approaches may be preferable, but we are not yet able to identify specific causes of increased intracranial pressure with sufficient reliability. The only study in the literature reporting a targeted approach is based on findings in 17 patients.49 Since the outcomes for patients with severe traumatic brain injury have not improved substantially during the past 20 to 30 years, developing and advocating a new approach may be considered to be long overdue.

After traumatic injury, the brain is vulnerable to a range of threats that may be successfully treated if they are recognized promptly and therapy is started early. Among such threats is the rapid development of increased intracranial pressure, which is especially relevant, since it is associated with increased morbidity and mortality and is amenable to treatment. In the absence of evidence to the contrary, increased intracranial pressure should be detected and treated promptly (e.g., with surgical removal of intracranial hematomas) and, whenever possible, should be prevented with appropriate intensive care.

Currently, invasive monitoring is the only reliable method for detecting and monitoring raised intracranial pressure in daily practice. The technique is controversial, since it clearly carries risks and side effects and its usefulness has not been conclusively shown. Further uncertainty remains concerning specific medical and surgical therapies for intracranial hypertension. Ongoing trials42,50 will provide important new data, but more research will be needed to reduce the massive and growing burden of traumatic brain injury. 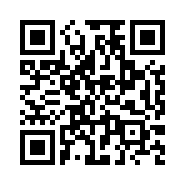