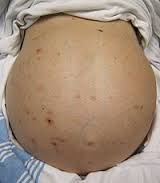 A higher rate of recent PPI use was seen in patients with cirrhosis who had SBP versus those who did not.

Comment: This study, although retrospective, suggests that proton-pump inhibitor use is associated with higher rates of spontaneous bacterial peritonitis in patients with cirrhosis. The overutilization of PPIs continues to be an issue, especially for long-term and high-dose use, which have been linked to such adverse outcomes as ventilator-associated pneumonia in ICU patients (Ann Intern Med 1994; 120:653 [Free full-text Annals article PDF | PubMed® abstract]). Randomized controlled trials are needed to validate the association between PPI use and SBP. Meanwhile, clinicians should be vigilant in making sure PPIs are used appropriately.

Intervention: At intubation, patients were randomly assigned to receive one of the following: antacid (a suspension of aluminum hydroxide and magnesium hydroxide), 20 mL every 2 hours; ranitidine, 150 mg as a continuous intravenous infusion; or sucralfate, 1 g every 4 hours.

Results: Of 244 assessable patients, macroscopic gastric bleeding was observed in 10%, 4%, and 6% of patients assigned to receive sucralfate, antacid, and ranitidine, respectively (P > 0.2). The incidence of early-onset pneumonia was not statistically different among the three treatment groups (P > 0.2). Among the 213 patients observed for more than 4 days, late-onset pneumonia was observed in 5% of the patients who received sucralfate compared with 16% and 21% of the patients who received antacid or ranitidine, respectively (P = 0.022). Mortality was not statistically different among the three treatment groups. Patients who received sucralfate had a lower median gastric pH (P < 0.001) and less frequent gastric colonization compared with the other groups (P = 0.015). Using molecular typing, 84% of the patients with late-onset gram-negative bacillary pneumonia were found to have gastric colonization with the same bacteria before pneumonia developed.

Conclusion: Stress ulcer prophylaxis with sucralfate reduces the risk for late-onset pneumonia in ventilated patients compared with antacid or ranitidine.