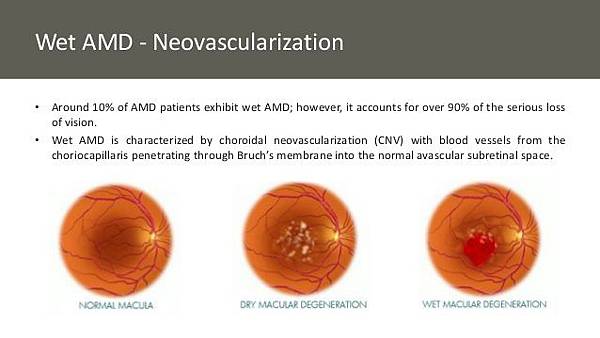 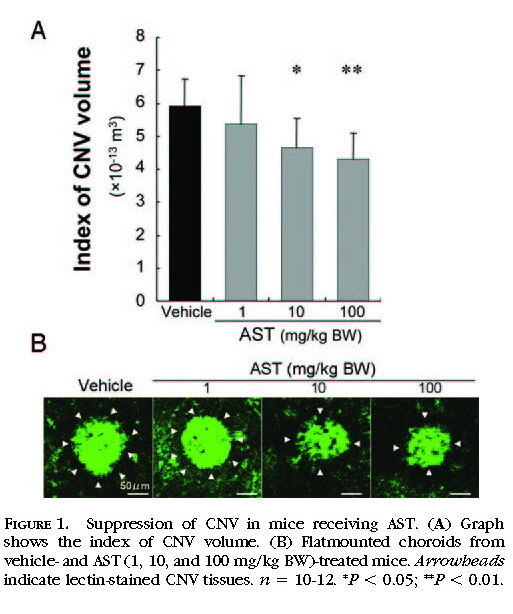 Suppression of Macrophage Infiltration by Treatment with AST
As the cellular mechanism in the pathogenesis of CNV, the infiltration of inflammatory cells, including macrophages, plays a critical role in the growth of CNV. We analyzed the infiltration of macrophages in murine CNV by immunohistochemistry (Fig. 2A)and quantitative RT-PCR (Fig. 2B)for the macrophage-specific antigen F4/80. Immunoreactivity for F4/80 was substantially lower in AST-treated mice at the dose of 10 or 100 mg/kg BW than in vehicle-treated mice (Fig. 2A) . In the quantitative analyses using the real-time PCR, AST-treated mice at the dose of 10 or 100 mg/kg BW showed a significant decrease in the expression of F4/80 in the RPE–choroid complex compared with vehicle-treated animals (P< 0.01; Fig. 2B ). 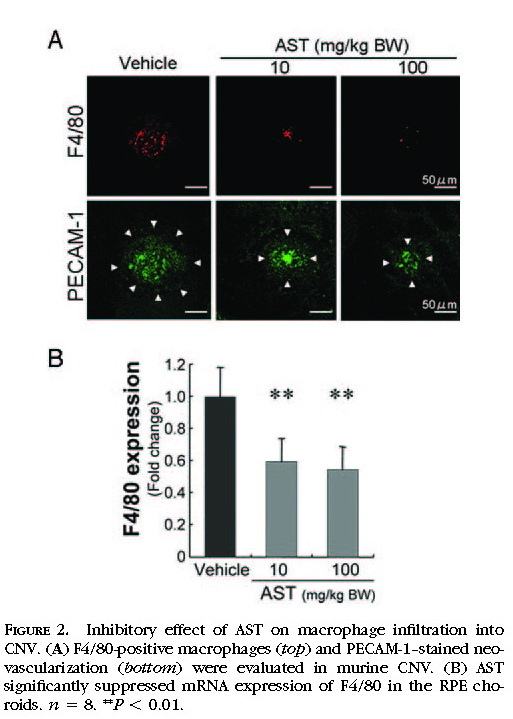 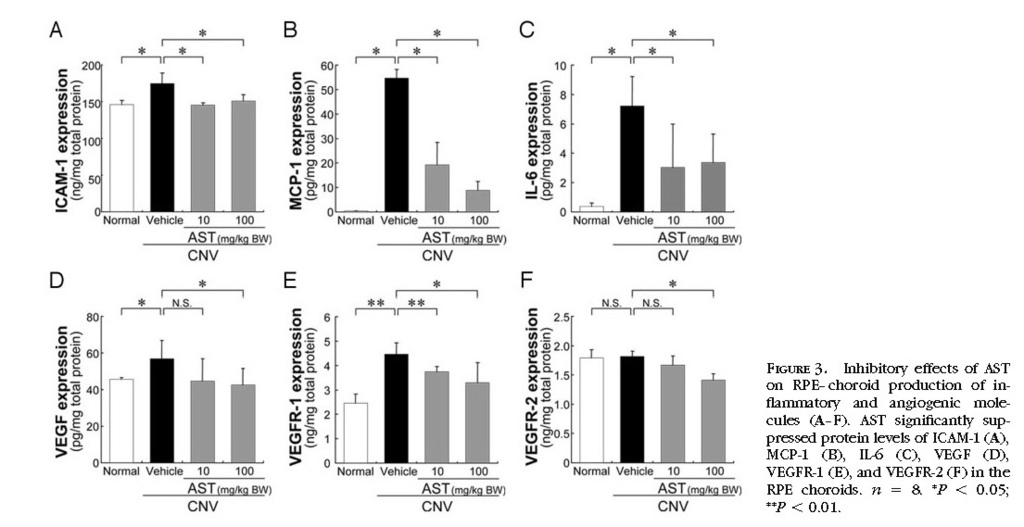 In Vitro Inhibition of Inflammatory and Angiogenic Molecules by Treatment with AST
To confirm in vivo effects of AST on choroidal inflammation and neovascularization, we further performed in vitro analyses. In RAW264.7 macrophages, AST treatment significantly (P < 0.01) reduced the protein levels of LPS-induced IL-6 (Fig. 4A)and VEGFR-1 (Fig. 4B) . In ARPE-19 cells, AST application led to a significant (P < 0.01) decrease in the protein levels of TNF-α–induced MCP-1 (Fig. 4C) . Similarly, in b-End3 cells, AST treatment significantly (P < 0.01) reduced protein levels of MCP-1 (Fig. 4D) , ICAM-1 (Fig. 4E) , and VEGFR-2 (Fig. 4F) , all of which were induced by TNF-α. In contrast, VEGF production was not significantly changed by treatment with AST, either in RAW264.7 macrophages or in ARPE-19 cells (data not shown). 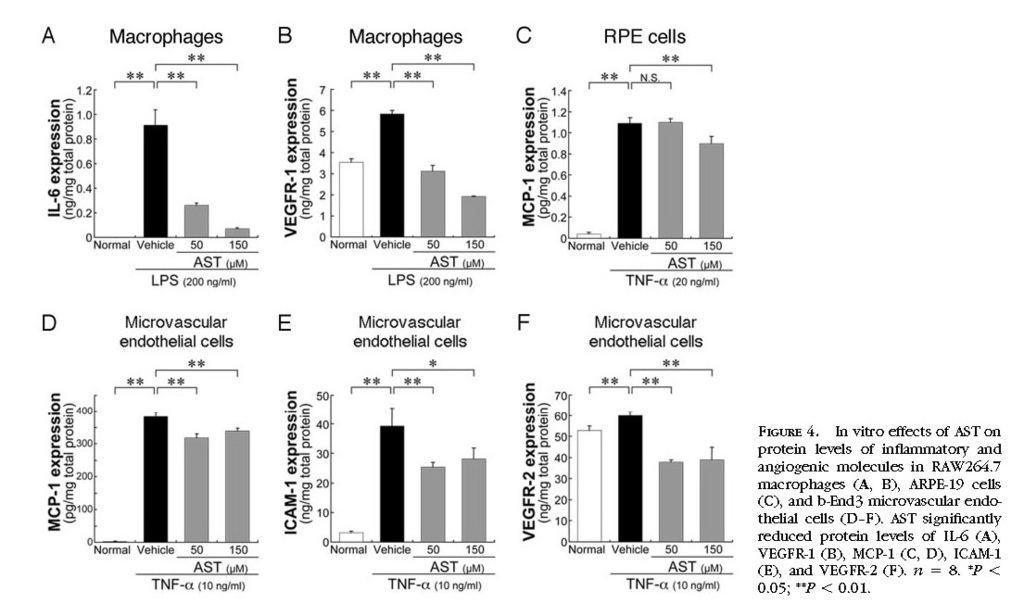 In Vivo Inhibition of NF-κB Activation by Treatment with AST
To define the signaling pathway involved in treatment with AST, we focused on NF-κB as an upstream transcriptional factor of inflammatory mediators and analyzed the protein level of IκB-α in vivo. In the murine RPE–choroid tissues, photocoagulation induced NF-κB activation, including IκB-α degradation (Figs. 5A 5B) . Protein levels of IκB-α in the RPE–choroid complex were significantly (P < 0.01) reduced 4 hours after photocoagulation compared with age-matched healthy controls. AST significantly (P < 0.01) inhibited IκB-α degradation at 4 hours in the murine RPE–choroid complex (Figs. 5A 5B) . 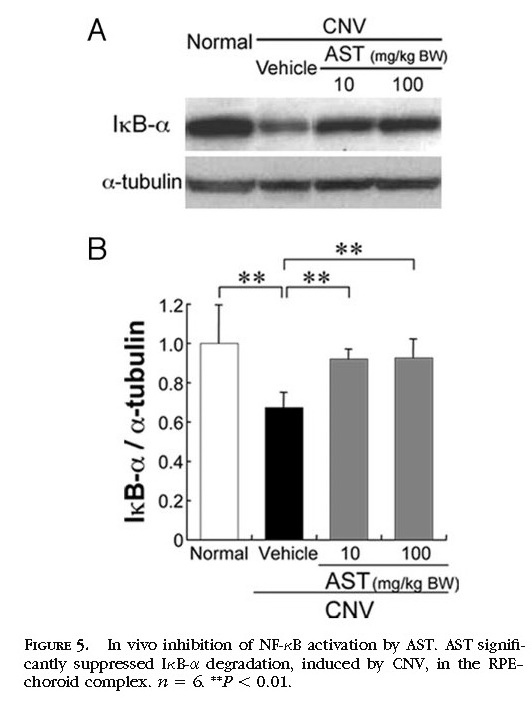 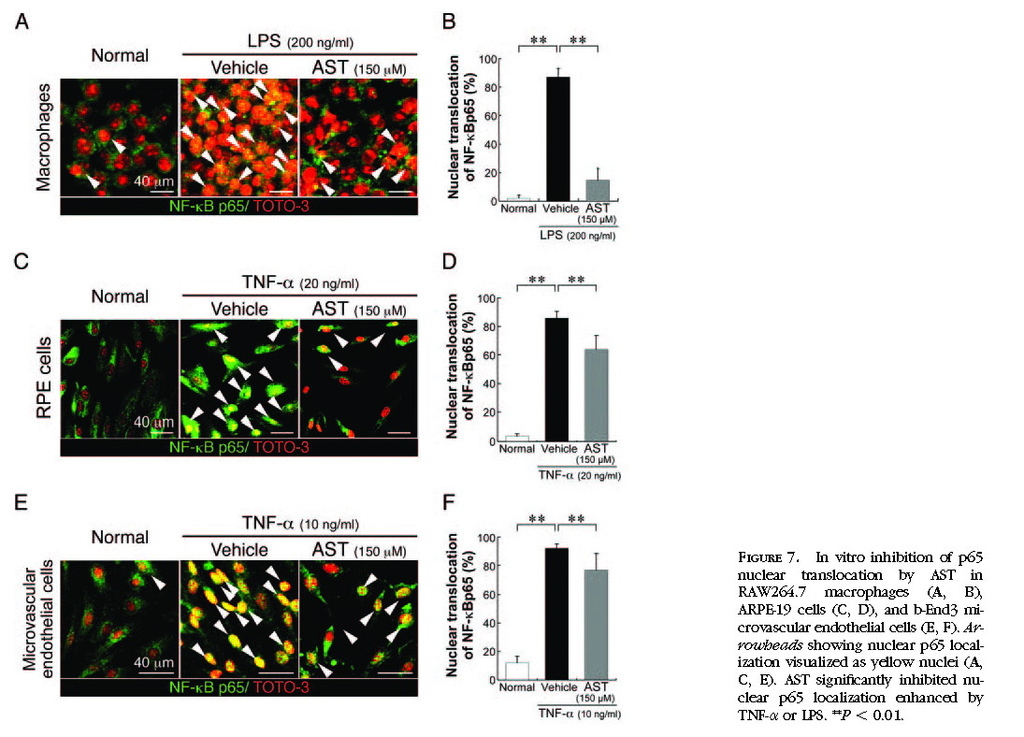 Discussion
The present study reveals several important findings concerning the antipathogenic role of AST in the development of CNV. First, treatment with AST led to significant suppression of CNV (Fig. 1) . Second, the cellular and molecular mechanisms in AST treatment included the inhibitory effects on macrophage infiltration into CNV (Fig. 2)and inflammation-related molecules in the RPE–choroid complex (Fig. 3)and in cultured macrophages, RPE cells, and microvascular endothelial cells (Fig. 4) . Third, AST treatment resulted in the inhibition of NF-κB activation in vivo (Fig. 5)and in vitro (Figs. 6 7) .
Various observational 25 26 27 and interventional 28 29 studies showed the possibility of carotenoid consumption, including AST, 28 lutein, 25 26 29 and β-carotene, 27 for reducing the risk for AMD. Accordingly, the effect of carotenoid supplementation for preventing and treating AMD has recently been attracting attention. We have revealed that lutein is anti-inflammatory in preventing CNV in mice. 23 AST has higher antioxidant activity toward peroxyl radicals than lutein. 30 However, no data have been presented concerning the inhibitory effect of AST on CNV development. We have demonstrated for the first time that AST treatment led to the suppression of CNV (Fig. 1) .
As cellular mechanisms for suppressing CNV by the treatment with AST, the present data showed that AST application led to significant suppression of macrophage infiltration (Fig. 2) . Pharmacologic depletion of macrophages, which accumulated in murine CNV tissues, 31resulted in significant suppression of murine CNV. 7 9 One of roles of macrophages in the development of CNV is to promote neovascularization by secreting VEGF at the lesion where RPE and vascular endothelial cells produce MCP-1 for macrophage recruitment. 32Our present data are compatible with the recent data showing that AST application led to in vivo suppression of inflammatory cell infiltration in the rodent model of endotoxin-induced uveitis 19 20 and in the rabbit model of atherosclerosis. 33
As molecular mechanisms for suppressing CNV, the present data showed the AST-induced suppression of various inflammation-related molecules, including VEGF, VEGFR-1, VEGFR-2, IL-6, ICAM-1, and MCP-1, which were upregulated after the induction of CNV (Fig. 3) . Previous reports concerning the molecular mechanisms underlying CNV generation showed VEGF as a promoting mediator. 5 31 34 Macrophages infiltrating into CNV are a rich source of VEGF. VEGFR-1 is expressed in inflammatory leukocytes, including macrophages.35 The AST-induced decrease in RPE–choroid VEGF and VEGFR-1, seen in the present study (Fig. 3) , is compatible with and is explained at least in part by the suppression of VEGF-secreting and VEGFR-1-bearing macrophage infiltration. Indeed, our in vitro experiments (Fig. 4)showed no remarkable effects on VEGF production either in macrophages or in RPE cells after AST treatment (data not shown). Additionally, we performed in vitro experiments showing that IL-6 levels in macrophages, MCP-1 levels in RPE cells, and ICAM-1, MCP-1, and VEGFR-2 levels in vascular endothelial cells were significantly reduced by AST (Fig. 4) . Recently, we have shown that CNV formation is mediated by IL-6 receptor signaling. 14Several in vivo experiments with genetically altered mice demonstrated a significant contribution of adhesion molecules and chemotactic factors, including ICAM-1 10 and MCP-1, 36 both of which are required for macrophage infiltration. VEGF-mediated endothelial cell mitogenic activity was shown to depend on VEGFR-2. 37 Collectively, the presently observed suppression of CNV by treatment with AST is likely attributable to the inhibition of multiple inflammatory steps, including MCP-1–induced migration and ICAM-1-dependent adhesion of macrophages, subsequent macrophage-derived VEGF and IL-6 secretion, and VEGFR-2 expression in endothelial cells.
Because NF-κB is suggested to induce the expression of inflammation-related molecules, we investigated the role of NF-κB in the development of CNV (Figs. 5 6 7) . After IκB phosphorylation and degradation caused by various stimuli, NF-κB p65/p50, capable of entering the nucleus and binding the κB sequence, promotes the transcription of target genes including ICAM-1, MCP-1, and IL-6. 38 Recently, we have clarified the critical role of NF-κB in the development of CNV, showing the NF-κB inhibition with an inhibitor of p65 nuclear translocation (dehydroxymethylepoxyquinomicin) led to significant suppression of experimental CNV. 23 In the present study, AST inhibited the activation of NF-κB by suppressing IκB degradation (Figs. 5 6)and subsequent p65 nuclear translocation (Fig. 7)in the RPE–choroid in vivo (Fig. 5)and in macrophages, RPE cells, and microvascular endothelial cells (Figs. 6 7) . Collectively, our data suggest the importance of AST capable of inhibiting NF-κB activation.
Anti-VEGF therapy is applied for the treatment of AMD complicated by CNV. 39 Because the therapeutic intervention for blocking VEGF tends to be limited to the advanced stage, an alternative early treatment is thought to be required, targeting inflammation as an antecedent event leading to neovascularization. Epidemiologic risk factors for AMD include age, smoking, cardiovascular diseases such as atherosclerosis, and nutrient status. 25 40 41 42It is reasonable to intervene modifiable risk factors, such as nutrient status for the prevention of AMD. Accordingly, our present data may provide molecular evidence of the potential validity of AST supplementation as a therapeutic strategy to suppress CNV.
3  These authors contributed equally to the work presented here and should therefore be regarded as equivalent authors.
Supported by a Grant-in-Aid (no. 19592039) for Scientific Research from the Japanese Ministry of Education, Culture, Sports, Science and Technology (SI).
Submitted for publication November 5, 2007; revised December 7, 2007; accepted February 15, 2008.
Disclosure: K. Izumi-Nagai, None; N. Nagai, None; K. Ohgami, None; S. Satofuka, None; Y. Ozawa, None; K. Tsubota, None; S. Ohno, None; Y. Oike, None; S. Ishida, None
The publication costs of this article were defrayed in part by page charge payment. This article must therefore be marked “advertisement” in accordance with 18 U.S.C. §1734 solely to indicate this fact.
Corresponding author: Susumu Ishida, Laboratory of Retinal Cell Biology, Department of Ophthalmology, Keio University School of Medicine, 35, Shinanomachi, Shinjuku-ku, Tokyo 160-8582, Japan; ishidasu@sc.itc.keio.ac.jp. 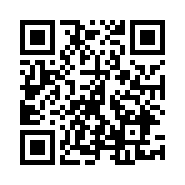