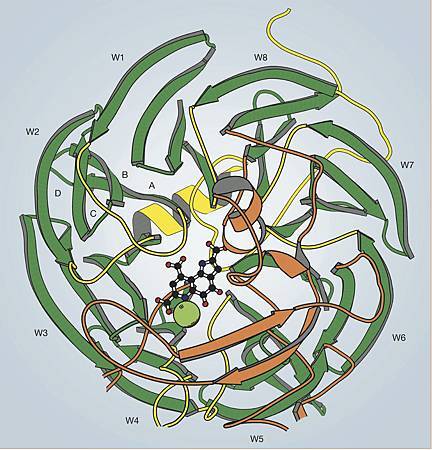 Arising from: T. Kasahara & T. Kato Nature 422, 832 (2003); see also communication from Rucker et al.; Kasahara et al. reply     The announcement by Kasahara and Kato of a new redox-cofactor vitamin for mammals1, pyrroloquinoline quinone (PQQ), was based on their claim that an enzyme, predicted to be involved in mouse lysine metabolism, is a PQQ-dependent dehydrogenase. However, this claim was dependent on a sequence analysis using databases that inappropriately label β-propeller sequences as PQQ-binding motifs. What the evidence actually suggests is that the enzyme is an interesting novel protein that has a seven-bladed β-propeller structure, but there is nothing to indicate that it is a PQQ-dependent dehydrogenase.

In bacteria, PQQ is an essential cofactor for various dehydrogenase enzymes known as quinoproteins2. Nutritional experiments have indicated some (unknown) metabolic or nutritional role for PQQ in mammals1,3,4, but it cannot be accepted as a vitamin until it is proved to be required by an enzyme as an essential cofactor; this is the key evidence that Kasahara and Kato1 claim to have provided. In the course of a study on bipolar disorder (see http://www.brain.riken.go.jp/labs/mdmd/pqq/index-e.html), these authors cloned a mouse gene encoding a protein (U26) with some similarity to yeast aminoadipate reductase (LYS2)5; they proposed that mouse U26 could be involved in one of the important first steps in the degradation of dietary lysine, acting as a PQQ-dependent adipic 6-semialdehyde dehydrogenase.

As would be expected from the method used by Kasahara and Kato in searching for the LYS2 analogue1, the U26 sequence contained no carboxy-terminal NAD(P)-binding domain. They noted from sequence analysis that U26 has an alternative carboxy-terminal domain that contains seven repeats of the ‘PQQ-binding motif’ that is conserved among bacterial PQQ-dependent dehydrogenase enzymes, leading to the conclusion that mouse U26 could be a PQQ-dependent dehydrogenase.

However, this conclusion is based on the misconception that the Smart and Pfam databases are able to recognize PQQ-binding sites even when, as in this case, there is negligible sequence similarity to known PQQ-dependent enzymes. The ‘sites’ wrongly identified by the databases do not represent PQQ-binding sites but represent the β-sheets that form the ‘blades’ of the ‘propeller fold’ that happens to be a feature of all PQQ-dependent dehydrogenases, whose main structure is a superbarrel made up of either six or eight ‘propeller blades’ (Fig. 1). The propeller fold is not related in any direct way to PQQ binding2,6, and these folds are found in many other types of protein, which have extreme functional and phylogenetic diversity7. 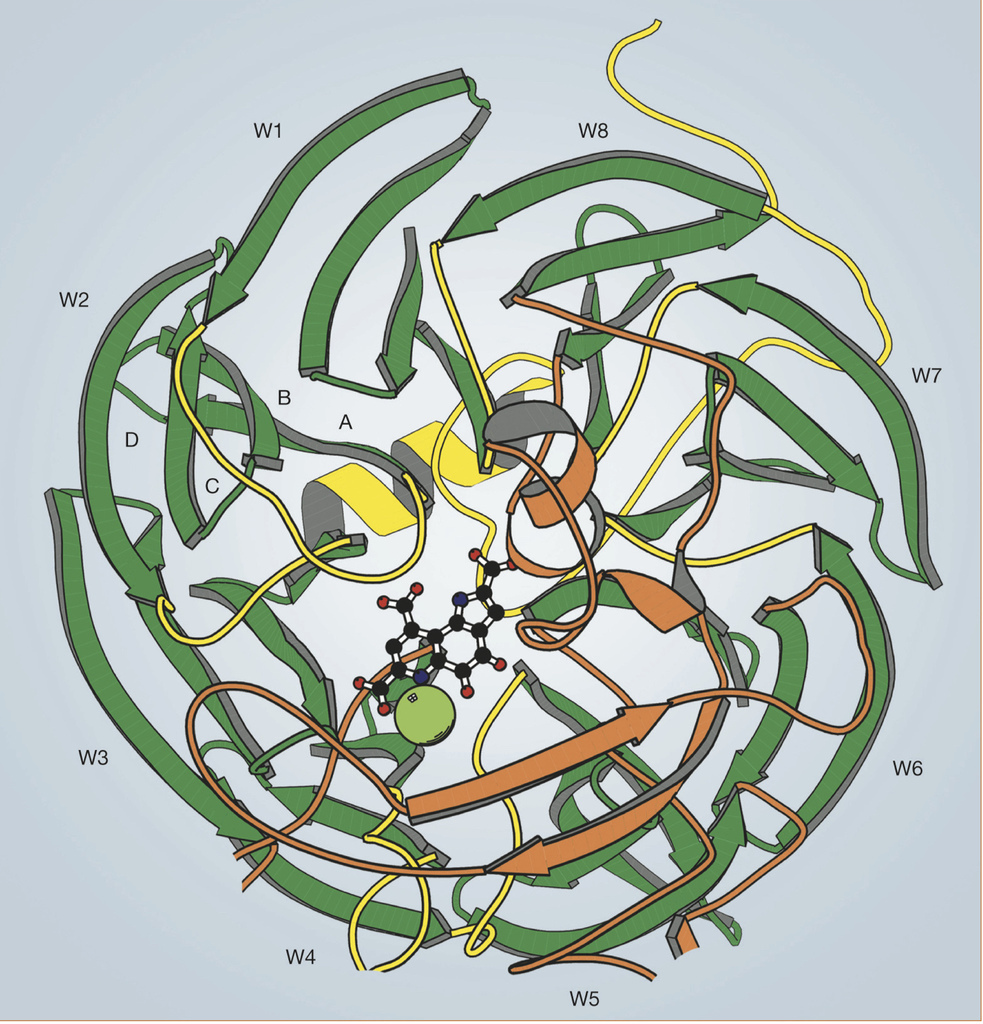 This is simplified to show the β-sheets (labelled W1–W8) that form the ‘propeller blades’ of the propeller fold; each blade is made up of four antiparallel strands (labelled A–D). It can be seen that these eight β-sheets have no specific role in binding the PQQ molecule (shown as ball-and-stick model). The calcium ion is shown as a small sphere.

We contend that there is still no compelling evidence for a PQQ-dependent enzyme in the mouse and that the authors' announcement of a new vitamin was therefore premature. 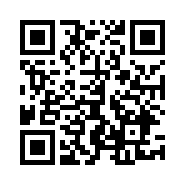