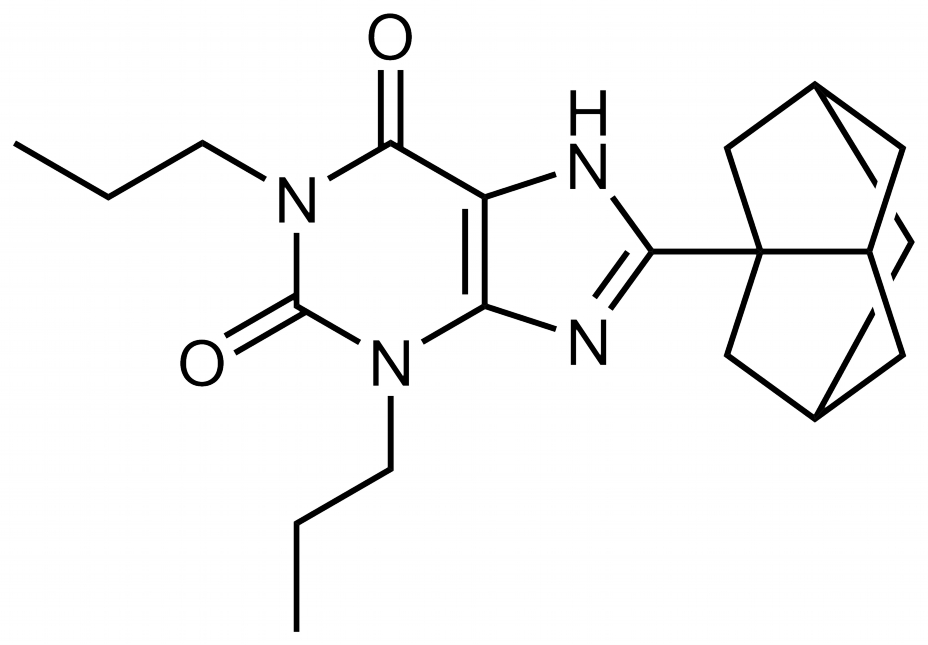 Preexisting chronic kidney disease and worsening renal function are common in patients hospitalized with acute heart failure and are associated with poor outcomes.1-5 Multiple factors are responsible for this association,3-5 including coexisting conditions, less use of effective therapies in patients with renal dysfunction than in patients without renal dysfunction, and inadequate treatment of volume overload because of a suboptimal response to diuretics or concern regarding diuretic toxicity.4,5
Adenosine has been implicated as an important intrarenal mediator of both worsening renal function and diuretic resistance.6,7 ATP hydrolysis releases free adenosine into the extracellular space, which in turn acts on adenosine A1 receptors in the afferent arterioles, reducing renal blood flow and the glomerular filtration rate (GFR) and stimulating the release of renal renin. In addition, A1-receptor activation enhances proximal tubular sodium reabsorption.6,7 In patients with heart failure, A1-receptor antagonists may preserve the GFR, enhance sodium excretion, and improve diuretic responsiveness.
Previous studies involving patients with heart failure have shown that coadministration of A1-receptor antagonists and loop diuretics enhances diuresis while maintaining or improving renal function.8-10 In the PROTECT (Placebo-Controlled Randomized Study of the Selective A1 Adenosine Receptor Antagonist Rolofylline for Patients Hospitalized with Acute Decompensated Heart Failure and Volume Overload to Assess Treatment Effect on Congestion and Renal Function) pilot study, a dose-finding study,11 rolofylline at a dose of 10, 20, or 30 mg or placebo was administered daily for up to 3 days in patients with acute heart failure, underlying renal dysfunction, and volume overload. As compared with patients who received placebo, patients who received the 30-mg dose of rolofylline had greater relief of dyspnea and less worsening of renal function, with a trend toward fewer deaths or readmissions for heart or renal failure. The present phase 3 PROTECT trial was designed to confirm these findings.

Important demographic, clinical, and treatment characteristics of the patients are shown in table1 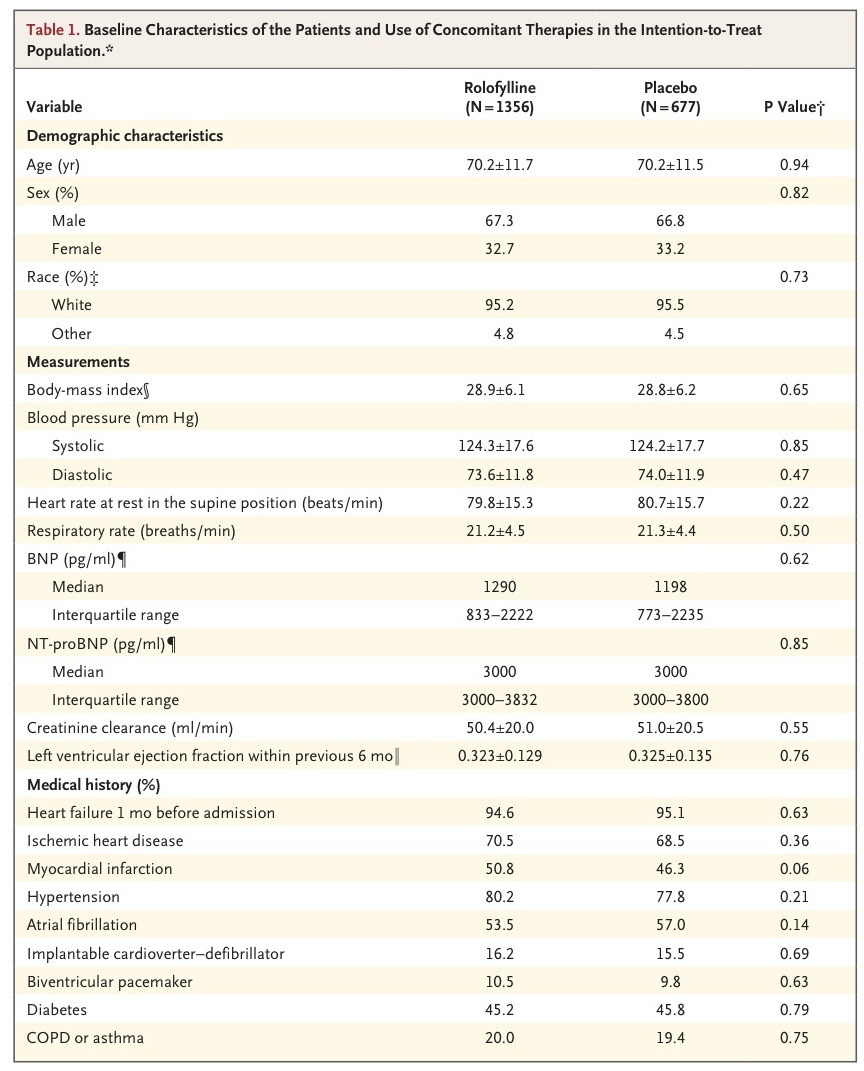 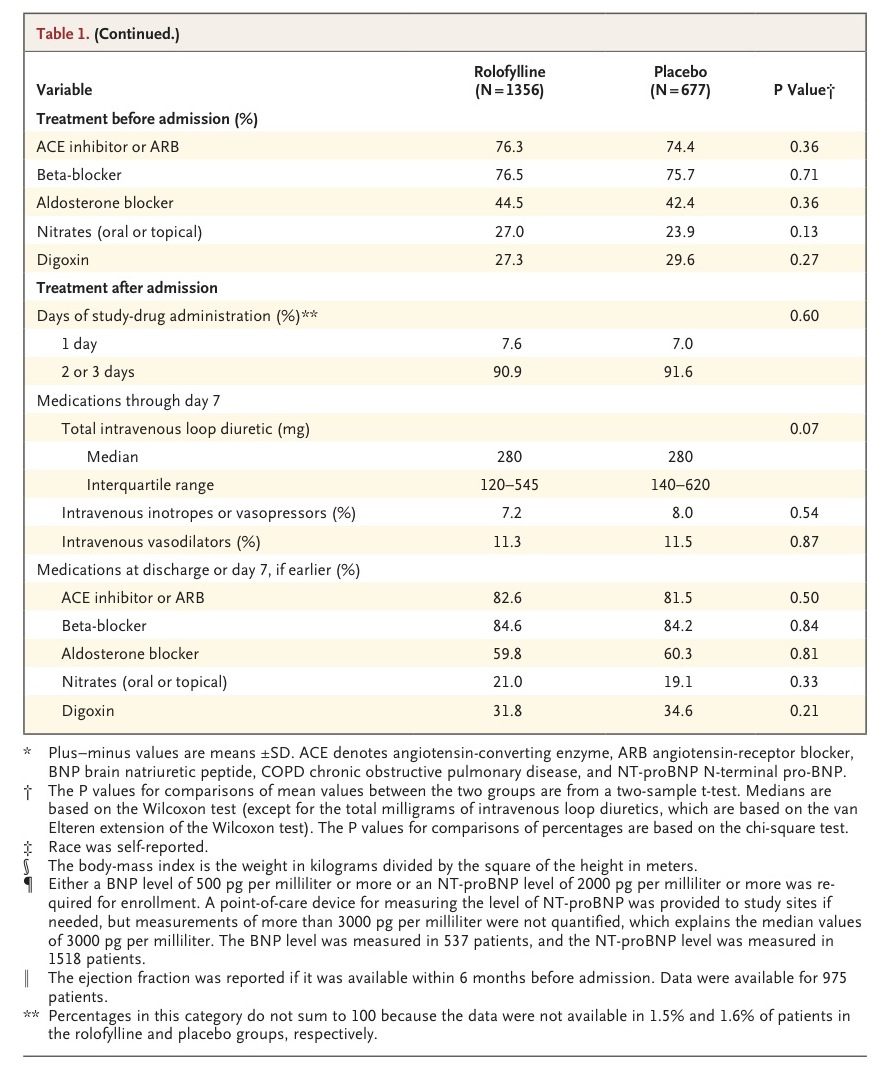 The study groups were well matched with respect to all baseline variables. Most patients had chronic heart failure before admission, ischemic heart disease, and one or more additional coexisting conditions. The mean creatinine clearance was 51 ml per minute, and levels of natriuretic peptides were substantially elevated.
More than 90% of patients received two or three doses of the study drug. The median doses of intravenous loop diuretics (in furosemide dose equivalents) administered from randomization through day 7 or discharge, if earlier, were 280 mg (interquartile range, 120 to 545) in the rolofylline group and 280 mg (interquartile range, 140 to 620) in the placebo group (P=0.07). The highest quartile of diuretic doses was substantially higher in the placebo group than in the rolofylline group. Weight loss during the first 4 days was greater with the use of rolofylline (3.0 vs. 2.6 kg, P=0.005). Additional intravenous vasoactive agents were administered before day 7 in 17% of the patients in the rolofylline group and 16% of the patients in the placebo group.
Primary Efficacy End Points
Rolofylline, as compared with placebo, was not beneficial with respect to the primary end point (the proportions of patients in whom treatment was successful, treatment failed, or there was no change in the patient's condition), yielding an odds ratio of 0.92 (95% confidence interval [CI], 0.78 to 1.09;P=0.35) 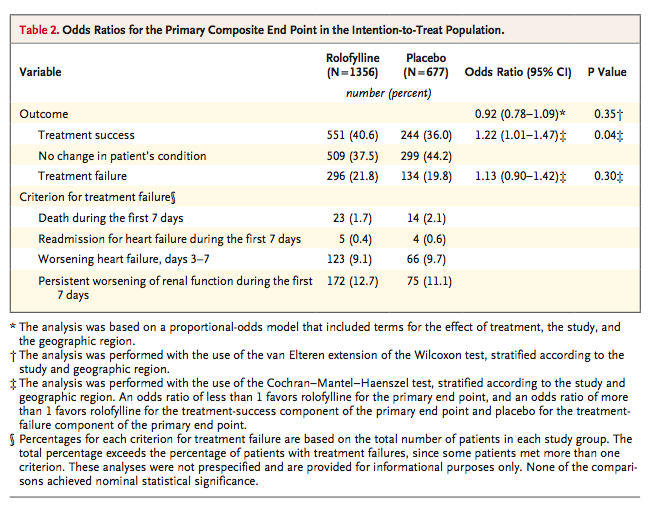 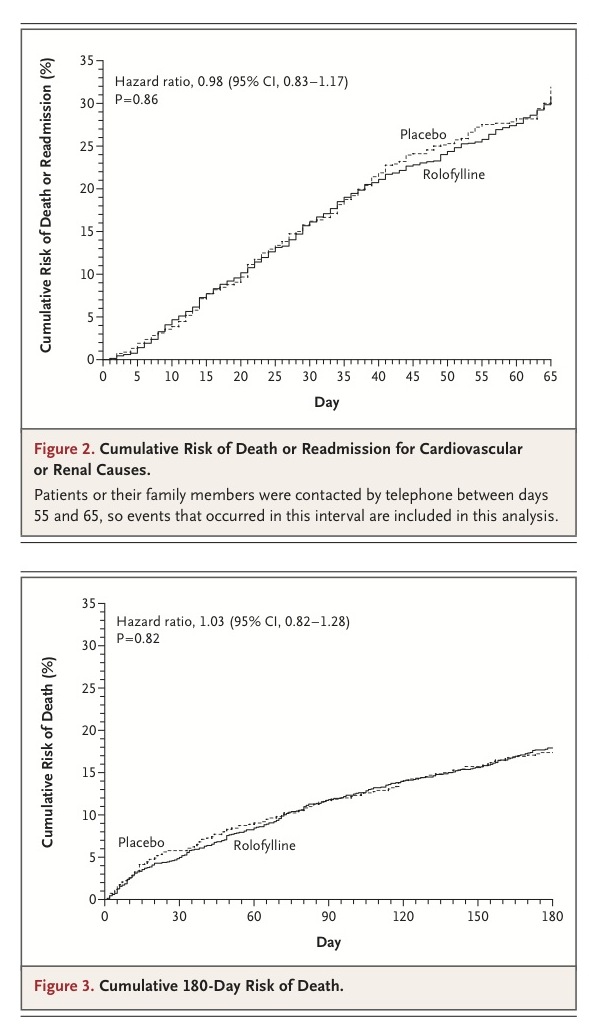 Imbalances were observed with respect to the investigator-reported neurologic adverse events. By day 14, a total of 11 patients in the rolofylline group (0.8%), but no patients in the placebo group, had seizures (risk difference, 0.8 percentage points; 95% CI, 0.3 to 1.5; P=0.02), of whom only 1 had received pretreatment with a benzodiazepine. Fifteen patients who received rolofylline (1.1%) and 2 patients who received placebo (0.3%) had strokes (risk difference, 0.8 percentage points; 95% CI, 0.0 to 1.6; P=0.06). There was no particular pattern of stroke events in the rolofylline group with regard to the stroke type (5 were hemorrhagic, 6 were ischemic, 3 were embolic, and 1 was a spinal cord infarction) or the temporal relationship to administration of the study drug (10 occurred within 6 days after the last dose and 5 occurred ≥7 days after the last dose) (Table 1 in the Supplementary Appendix).

The clinical and economic burdens of heart failure have been well described.17 Treatment advances over the past 25 years have improved symptoms and quality of life and increased survival among patients with chronic heart failure.18 In contrast, although approximately one third of patients with acute heart failure die or are readmitted within 3 months after discharge,19-21 new therapies have consistently failed to improve their outcomes.20 Patients with underlying chronic kidney disease or worsening renal function are at particularly high risk.1,2,4,5,22,23

As a result, there has been considerable interest in A1-receptor antagonists, which have enhanced the response to diuretics in patients with heart failure, usually without further deterioration of renal function.7-10,23-25 With the use of a protocol that was similar to that in the present trial, the PROTECT pilot study randomly assigned 301 patients with acute heart failure to placebo or to 10-, 20-, or 30-mg doses of rolofylline.11 In the pilot trial, the group of patients who received 30 mg of rolofylline were more likely than those who received placebo to have improvement in dyspnea on days 2 and 3 (59.4% of patients vs. 41.3%) and were less likely to have persistent renal impairment (8.0% vs. 18.2%), with a trend toward a lower 60-day rate of death or readmission for cardiovascular or renal causes (19% vs. 34%; hazard ratio, 0.55; 95% CI, 0.28 to 1.04; P=0.06).

However, despite similarities in study design, entry criteria, and dose of rolofylline, the main trial reported here did not replicate the findings of the pilot trial. Several reasons for this discordance warrant consideration. The protocol underwent several revisions. First, one of the inclusion criteria for the current trial, but not for the pilot trial, was an increased level of brain natriuretic peptide or N-terminal pro-brain natriuretic peptide; nonetheless, nearly 80% of the patients in the pilot trial would have qualified for the present trial. Second, the criterion for successful treatment was changed from a physician-directed switch from intravenous to oral diuretics to patient-reported improvement in symptoms. Nonetheless, rolofylline was associated with a significantly higher rate of success than placebo. Finally, on the basis of the data from the pilot study and regulatory input, the definition of persistent renal impairment was changed from an increase in the serum creatinine level of 0.3 mg per deciliter or more from baseline to discharge or day 7 to an increase at both day 7 and day 14. The neutral results of PROTECT primarily reflect this lack of a favorable effect on the serum creatinine level.

Perhaps the most likely explanation for the differences between the findings in the two studies is the large uncertainty about the results of the pilot study because of the small treatment groups and the dependence on these findings in designing critical elements of the main trial, including the selection of a single dose, entry criteria, and end points.11 The post hoc selection of the best of three dose groups from a pilot trial with multiple small treatment groups carries the inherent risk that an apparent superiority may be the play of chance and that these findings may not be replicable in a more definitive, larger study, as happened in the current trial. These findings should encourage the conduct of larger phase 2 studies with more robust, clinically relevant end points.

A total of 0.8% of the patients who received rolofylline (as compared with none who received placebo) had seizures, a recognized risk of agents with A1 receptor−antagonist activity because of their tendency to lower the threshold for seizures.26,27 The excess of strokes in the rolofylline group was unanticipated, is difficult to interpret, and is not clearly explained by the pharmacologic characteristics of the drug.

In conclusion, the primary and secondary end points were not achieved with rolofylline in the current trial. The current trial and previous unsuccessful trials of treatment for acute heart failure highlight the complexity and heterogeneity of this clinical syndrome and the need for new, more effective therapeutic approaches.

Supported by NovaCardia, a subsidiary of Merck. 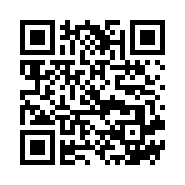