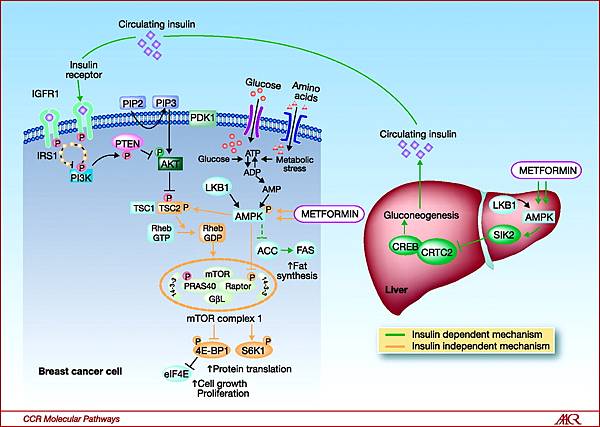 Metformin is the first-line pharmacologic treatment for type 2 diabetes and the most commonly prescribed drug for this condition worldwide, either alone or in combination with insulin or other glucose-lowering therapies. Metformin is a biguanide, a drug class of herbal origin that has been widely used to treat diabetes since the 1950s.1,2 Two other biguanides were withdrawn from clinical use because they caused lactic acidosis. Metformin was also taken off the US market due to concerns over lactic acidosis, but it subsequently has been proven safe and effective in lowering glucose levels and was reintroduced in 1995. Optimal metformin use requires clear understanding of its effects, dosing, safety, and alternatives.

Animal and human studies have shown that metformin acts in the liver, where it inhibits gluconeogenesis by blocking a mitochondrial redox shuttle. However, a full understanding of metformin’s mechanism of action remains elusive, and the drug’s effects are likely pleiotropic. For instance, metformin has also been shown to be an insulin sensitizer and to likely act in the gut lumen through multiple mechanisms.1 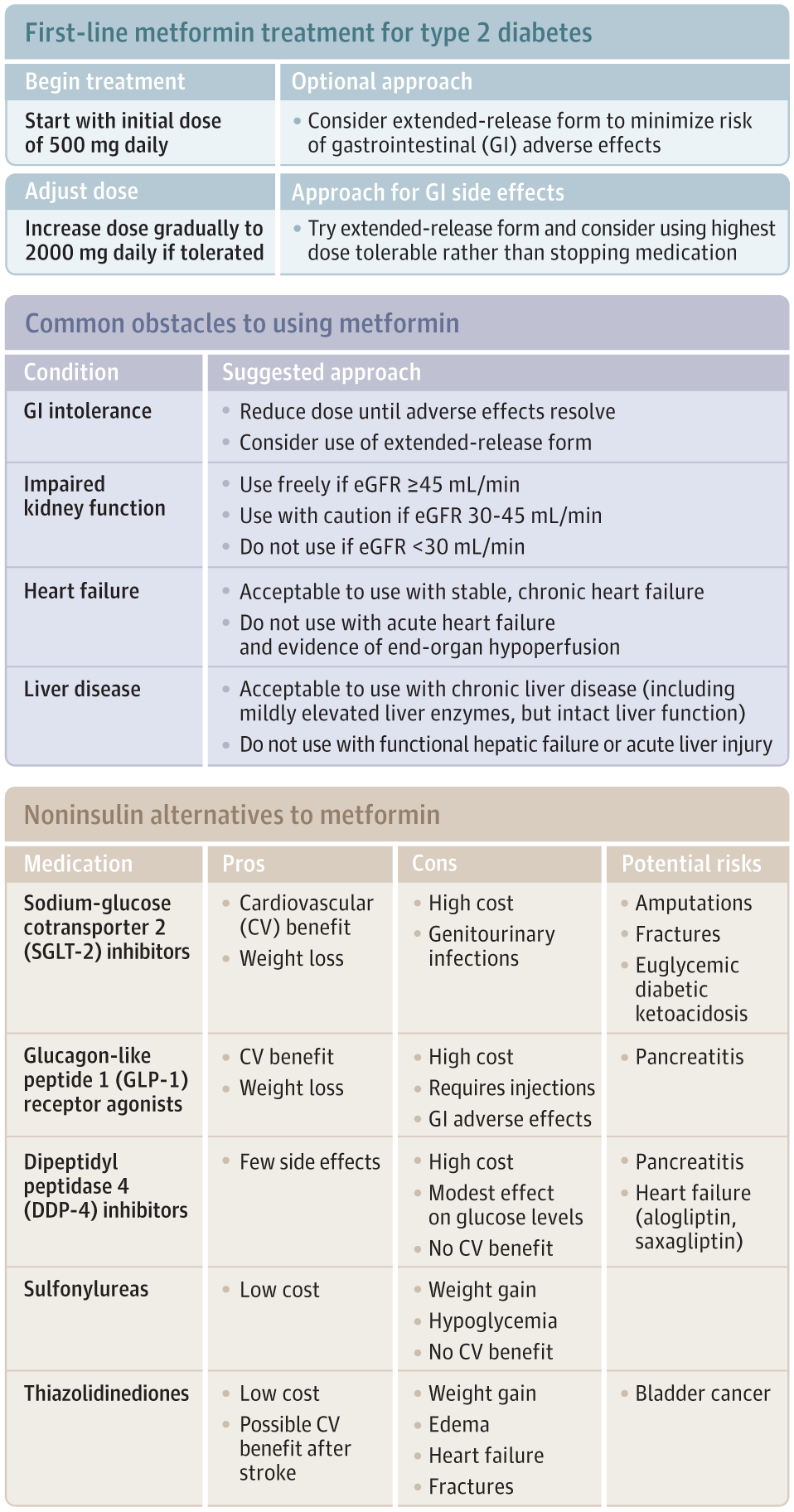 Suggested Starting Regimen for Metformin, Common Obstacles to Use, and Alternatives

This evidence for cardiovascular and mortality benefits is now regarded as weak given the small subgroup size and because the trial was conducted between 1977 and 1991 (meaning its results may not pertain to current clinical conditions). Furthermore, the trial included another subgroup of patients already taking sulfonylurea who were randomized to intensification of therapy with metformin (n = 268) and found 11.2% absolute higher mortality in the metformin group (P = .04).5 The authors have argued that these findings were likely due to chance. Meta-analyses and other small studies have overall shown no increased risk of mortality from metformin, but further research, ideally large clinical trials, is needed to confirm the limited evidence for benefit.5,6

Among high risk patients with prediabetes, metformin reduces the risk of developing diabetes (7.2% absolute risk reduction; P < .001) and is associated with modest weight loss.7 There is also evidence supporting use of metformin in the management of polycystic ovarian syndrome and gestational diabetes.8 Interest in metformin for other uses, such as cancer prevention and to delay some processes of aging, is not yet supported by clinical evidence.1

Sixty years of clinical experience and trial data have yielded almost no safety concerns for metformin. The major exception is that metformin causes subclinical increases in lactic acid and appears to cause lactic acidosis in extreme overdose. Metformin use has been discouraged in patients with risk factors for lactic acidosis, including hepatic impairment, heart failure, and chronic kidney disease (CKD). But ongoing experience with metformin indicates that its use is unsafe only for a relatively small subset of patients with severe liver, heart, or kidney dysfunction.3,9

The US Food and Drug Administration (FDA) recently changed a contraindication to metformin use in CKD so that metformin can now be initiated in patients with an estimated glomerular filtration rate (eGFR) of 45 to 60 mL/min and can be continued in patients with an eGFR of 30 to 45 mL/min as long as kidney function is closely monitored. Metformin continues to be contraindicated when eGFR is less than 30 mL/min.3 Lactic acidosis in patients with severe CKD is likely mediated by accumulation of excessive levels of metformin, which is renally cleared, but metformin is not itself renally toxic.

The FDA label urges caution in prescribing metformin to patients with acute heart failure, “particularly when accompanied by hypoperfusion and hypoxemia.” In patients with stable compensated heart failure and adequate end-organ perfusion, metformin appears safe. The FDA label also raises concerns about metformin-induced lactic acidosis in hepatic failure, which “may be due to impaired lactate clearance.” In patients with chronic liver disease but with preserved hepatic function, there is no evidence of increased risk from metformin.9

Due to the potential of iodinated contrast to impair kidney function, the FDA label advises stopping metformin at the time of or prior to iodinated contrast imaging procedures in patients with eGFR of less than 60 mL/min, history of heart failure, hepatic failure, or alcoholism; and in any patient in whom intraarterial contrast is used.

Other Barriers to Use

Metformin causes adverse effects in as many as 25% of patients, particularly diarrhea and nausea. Limited evidence suggests that beginning at a dose of 500 mg/d, titrating up slowly and using extended-release formulations, may mitigate gastrointestinal adverse effects.10 The dose could be increased, as tolerated, to a total of 2000 mg/d in divided doses, because metformin’s antihyperglycemic effect is dose dependent and clinical trial evidence is based on doses as high as 2550 mg/d.5 If adverse effects occur, clinicians should work with patients to find a dose that balances glucose lowering with adverse effects.

Some patients report other barriers to metformin use, including large pill size, pill odor, and occasionally cost. While little can be done about the first 2 issues, clinicians should be able to address cost as a barrier, since a 1-month supply of extended-release metformin can be purchased out-of-pocket for as little as $4.4

Newer agents may deserve consideration as alternative first-line pharmacologic treatments. The case for metformin’s cardiovascular benefit primarily rests on findings from a subgroup of a clinical trial conducted nearly 30 years ago. In contrast, the safety and cardiovascular benefits of sodium-glucose cotransporter 2 (SGLT-2) inhibitors and glucagon-like peptide 1 (GLP-1) receptor agonists are supported by clinical trials of thousands of patients in the modern context of antiplatelet, statin, and blood pressure management.4 Because these drugs also cause weight loss without inducing hypoglycemia, they match many of the advantages of metformin.

However, the newer drugs have been primarily studied as add-on therapy to metformin in patients with established cardiovascular disease. It remains unclear whether their benefits extend to patients who are drug-naive or at low cardiovascular risk. Further, the long-term safety of the newer agents is unknown, with unresolved concerns such as euglycemic diabetic ketoacidosis and amputation for SGLT-2 inhibitors and acute pancreatitis for GLP-1 agonists.4 In contrast, metformin boasts decades of clinical experience and safety data from 2 trials with more than 10 years of follow-up.5,7

Guidelines still favor metformin as the first-line agent for most patients, given its safety, effectiveness, and substantial cost advantage over newer drugs.2,4 For patients with a contraindication or intolerable adverse effects to metformin, SGLT-2 inhibitors and GLP-1 receptor agonists could be considered, but care should be personalized. For example, sulfonylureas remain an important option for patients who cannot take metformin but are unable to afford expensive brand-name drugs.

Metformin remains a good first-line pharmacologic treatment for type 2 diabetes in most patients (Figure). Adverse effects are common but may be mitigated by careful dose titration, good communication with patients, and use of extended-release formulations. Metformin’s robust safety data and low cost are significant advantages over alternatives. 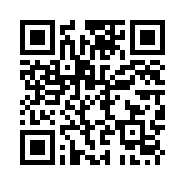