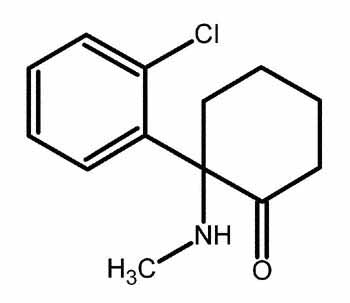 Objectives Nasogastric (NG) intubation is one of the most common procedures performed in the emergency department (ED) and other hospital settings. The aim of this study was to compare the level of pain during NG tube insertion in groups receiving local ketamine plus water-soluble lubricating gel and water-soluble lubricating gel alone (the latter is the common practice in our hospital). It was hypothesised that ketamine has local anaesthetic effects in reducing the pain of NG tube insertion in the ED.

Methods This prospective double-blind randomised clinical trial was performed on alert haemodynamically stable subjects aged >18 years who required NG tube placement for diagnostic or therapeutic purposes in the ED of a teaching hospital during January and June 2008. The subjects were divided into two groups using randomised allocation software. The ketamine group received intranasal ketamine, while an equivalent volume of sterile water was instilled into the nasal cavity in the control group. The same amount of lubricating gel was used in both groups. The pain of NG tube placement was measured using a standard 100 mm visual analogue scale (VAS). The physician was asked to evaluate the difficulty of the procedure using a 5-point Likert scale.

Conclusion Intranasal ketamine is an effective agent in reducing pain during NG tube insertion among patients without serious underlying illness. 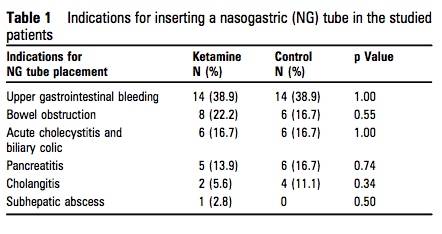 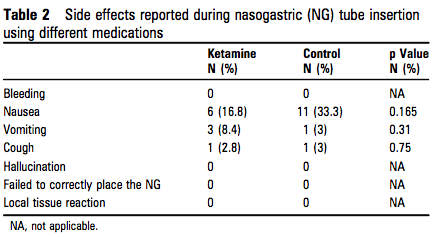 Limitations of the study

Our study was a single-centre study performed by a single operator on convenient samples. During the pilot study,

multiple physicians performed the procedure but the results revealed a considerable difference between the evaluated vari- ables, suggesting that different individuals have different expe- riences in performing a single procedure. As a result, to reduce skill difference between operators, a single physician was responsible for inserting NG tubes in all cases. This meant that we were obliged to limit our subjects to those who came to the ED during the days on which the physician was working, which was at least 5 days per week (12 h each day).

Moreover, we did not evaluate the plasma levels of the drug, indicating that the systemic absorption of ketamine may be the possible cause for the resulting analgesia and many of the reported side effects.

In addition, as topical ketamine gel is not available in Iran, we used the solution. It is possible that using a topical gel would improve the results; however, further studies are required to confirm this hypothesis. 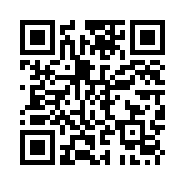