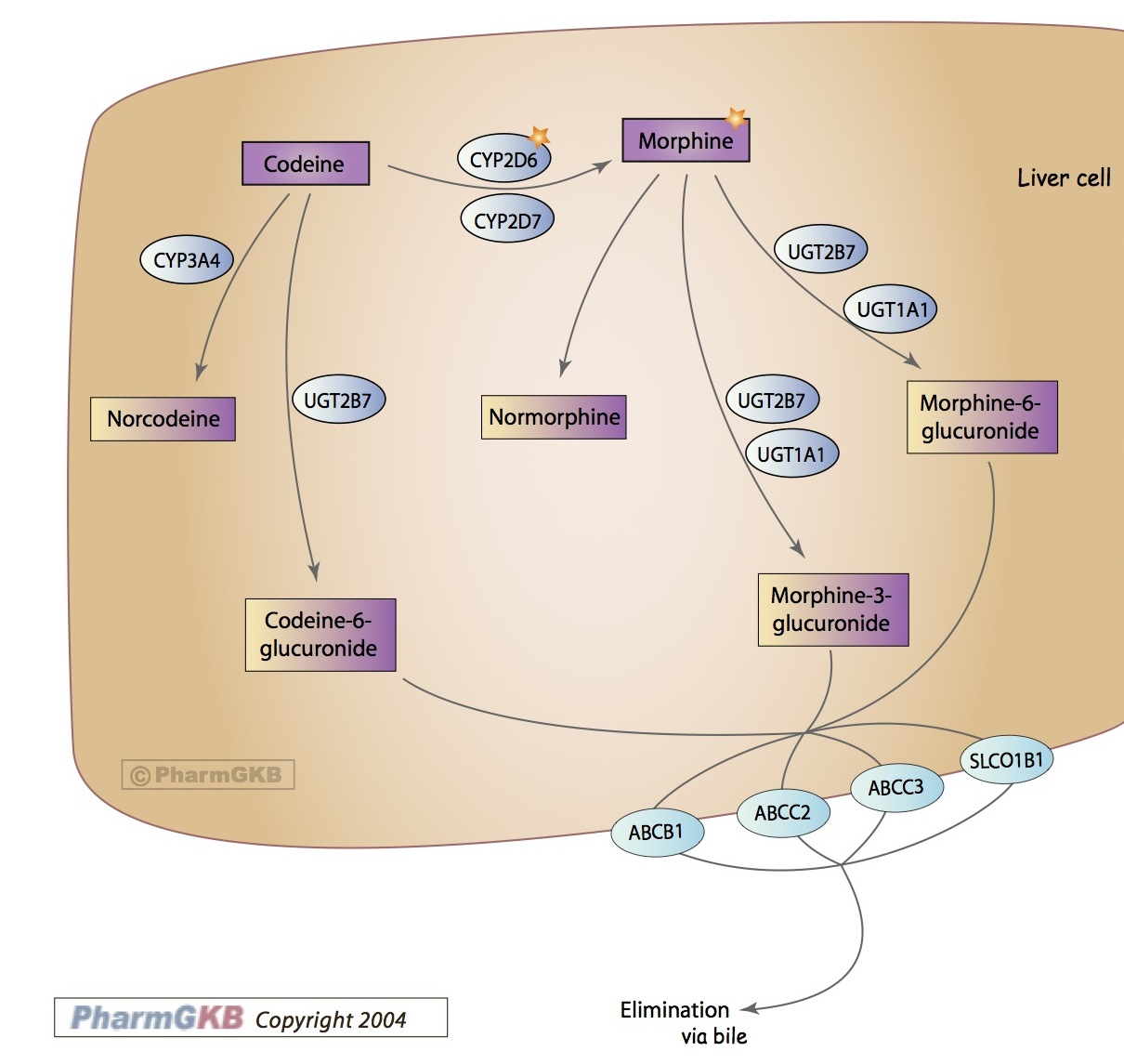 Codeine and morphine are pain relief drugs in the opiate family. Both drugs are found naturally in the poppy plant, Papaver somniferum, but for commercial use, codeine is usually synthesized for from morphine, which is more abundant in nature. In addition to their analgesic effects, both drugs have antitussive effects and antidiarrheal activity. Side effects include respiratory depression, constipation, sedation and addiction. Codeine is a less potent agonist of the mu opioid receptor (OPRM1) than morphine and is considered a safer alternative in an outpatient setting. However, recent reports of severe adverse events in breastfed infants whose mothers had altered metabolism of codeine [Article:16920476, 18719619] have led to an FDA warning on prescription of codeine to nursing mothers http://www.fda.gov/bbs/topics/NEWS/2007/NEW01685.html.

Approximately 60% of morphine is glucuronidated to morphine-3-glucuronide (M3G) while 5-10% is glucuronidated to morphine-6-glucuronide (M6G) [Article:8841154, 18187562]. These reactions are principally catalyzed by UGT2B7 in the liver. UGT1A1 may have a minor role in the formation of M3G [Article:12185559], and UGT1A1 and UGT1A8 are capable of catalyzing the formation of M6G in vitro and so contribute to this pathway, although UGT1A8 is minimally expressed in liver and so is not depicted here [Article:18187562]. M6G has a higher affinity for OPRM1 than morphine and M3G and so the ratio of morphine to M6G is considered an important indicator of analgesic effect [Article:18187562].

Transporters are also depicted in this pathway, as they influence clearance of codeine, morphine and their metabolites [Article:12492606, 15886284]. Some of the evidence for the involvement of these transporters was derived from experiments done in mice and may or may not be translatable to human pharmacokinetics [Article:12950465, 10516633]. The transporters present at the blood-brain barrier, not depicted in this pathway, as well as metabolic enzymes and transporters in the brain and GI tract, likely also play an important role in the pharmacokinetics of codeine and morphine.

The most commonly studied gene with respect to this pathway is CYP2D6. The CYP2D6 gene is highly polymorphic with many important SNPs, haplotypes and copy number variants (see CYP2D6 VIP annotation for further details). Simplistically, CYP2D6 variants can be categorized into poor metabolizers (low activity variants), extensive metabolizers (high or normal activity variants) and ultrarapid metabolizers (multiple gene copy variants). Poor metabolizers are unable to convert codeine to morphine efficiently and as a consequence may not experience pain relief [Article:1782973]. Ultrarapid metabolizers may metabolize codeine too efficiently leading to morphine intoxication [Article:15625333]. The CYP2D7 gene is generally considered a pseudogene; however a genetic variant resulting in a frame shift can cause active protein to be produced that is able to metabolize codeine to morphine [Article:15051713].

Although not as extensively studied in this context as CYP2D6, other pharmacogenes have been shown to influence this pathway. Variation in CYP3A4, or coadministration of drugs that act at CYP3A4, can affect flux through the codeine pathway [Article:15625333].

There is conflicting evidence regarding the influence of UGT2B7 polymorphism on codeine and morphine metabolism. The most well studied SNP, UGT2B7*2 (rs7439366, UGT2B7:His268Tyr, UGT2B7:802T>C) did not effect morphine metabolism in vitro [Article:12920168, 11186130]. Additional variants in UGT2B7 have been shown to impact morphine metabolism in some studies but have failed to be consistently reproduced [Article:12811366,17724700, 18622261]. With the recent identification of the haplotype structure of UGT2B7 and identification of variants affecting mRNA splicing, future studies will be able to better define the role of variation in this gene on the codeine and morphine pathway [Article:18622261].

Functionally important variants in the transporters ABCB1, ABCC2, ABCC3 and SLCO1B1 have been documented and may also be important for the pharmacokinetics of codeine and morphine, although this has yet to be demonstrated conclusively in humans [Article:15530129].

Pharmacokinetics and metabolism of codeine in humans.

Pharmacokinetics: Codeine is readily absorbed from the gastrointestinal tract and has an oral bioavailability of 53%, relative to the i.m. route. Codeine is rapidly distributed from blood to body tissues, passes the blood-brain barrier and is found in fetal tissue and breast milk. Codeine is metabolized in the liver to morphine and norcodeine, each representing about 10% of the administered dose of codeine. Urinary excretion products are free and glucuronide-conjugated codeine (about 70%), free and conjugated morphine (about 10%), normorphine (under 4%) and hydrocodone (<1%). The remainder of the dose appears in the feces.

Codeine controlled release is absorbed to an equivalent extent as immediate-release tablet or liquid formulations of codeine. In single dose studies in fasting, healthy volunteers, the maximum plasma codeine concentration (Cmax) is approximately 56% of that from immediate-release formulations and is achieved approximately 2.6 times later - at 3.3 hours post-dosing. In steady-state studies in healthy volunteers, both the extent of absorption and maximum plasma codeine concentrations are equivalent to those from immediate-release formulations at the same total daily dose. In the presence of food, the extent of absorption of codeine controlled release is not significantly increased, but peak concentrations are somewhat delayed, occurring at 3.9 to 4.5 hours postdose. 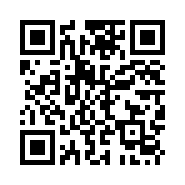