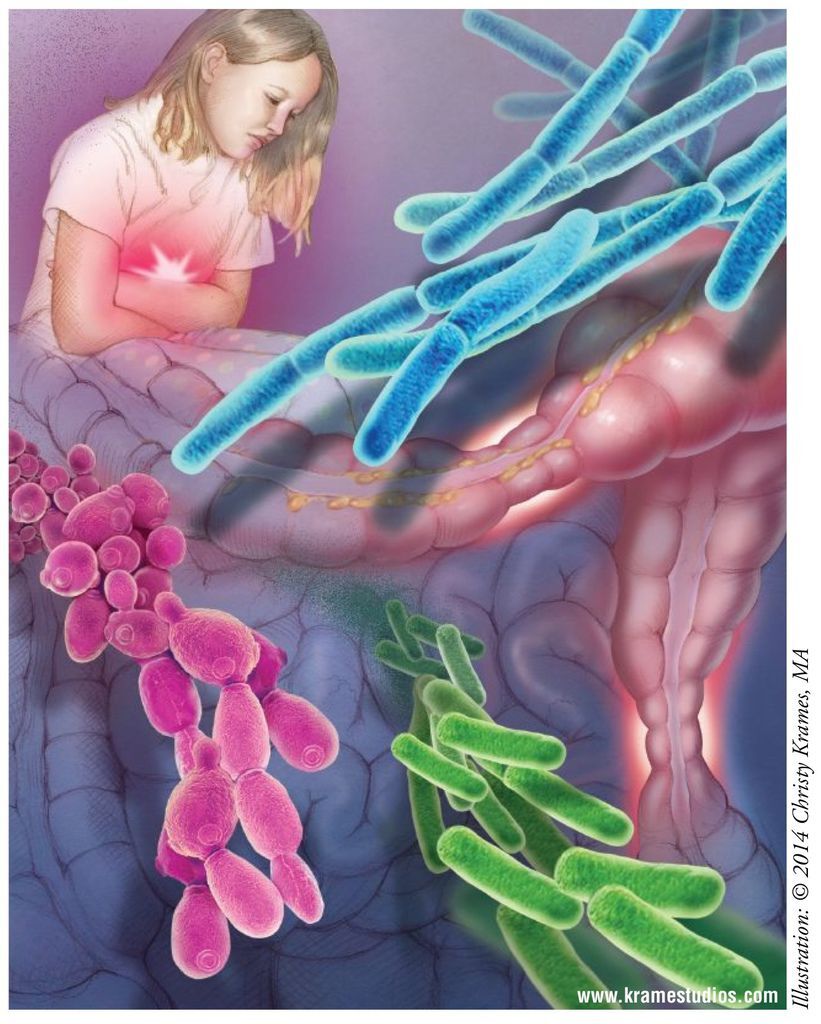 ABSTRACT: Probiotics are living microorganisms that are taken for their preventive or therapeutic effects on a wide variety of disease states, many of which are common in the pediatric population. A wide variety of probiotic species are available, but Lactobacillus species are the most investigated. The majority of probiotic use revolves around gastrointestinal diseases. Pharmacists play a key role in educating patients and caregivers on the effectiveness of probiotics for certain disease states, as well as in choosing the appropriate probiotic strain and recommended dosage for pediatric patients.

Probiotics are active living microorganisms that have a defined health benefit—either therapeutic or preventive—when ingested in sufficient quantity.1 These microorganisms are usually consumed with the intent to replace or increase an individual’s microflora. Probiotics must be resistant to stomach acid and bile to survive passage through the digestive tract, must be able to proliferate and colonize the gut, and must be able to attach and adhere to the lining of the gastrointestinal (GI) tract.1,2

The human gut is a sterile environment until birth. Following birth, infants are exposed to a wide variety of bacteria. This early exposure to bacteria establishes the normal bacterial flora that will be present for the rest of an individual’s life. During early infancy, the intestinal immune system begins to recognize that some bacteria are good and some bacteria are bad, and that bad bacteria require an immune response to be mounted. For the rest of the individual’s life, any ingestion of bacteria that alter the normal gut flora could trigger an immune response targeting the bad bacteria.1 It has been asserted that probiotics play a beneficial role in the digestive and immunologic function of the human body by maintaining or enhancing gut microflora and the intestines’ natural function. These actions may significantly alleviate numerous diseases in children.1,2

Several mechanisms have been proposed to explain the actions of probiotics, but in most cases the exact mechanism of action is not fully understood, and it is likely that a number of mechanisms are working simultaneously.

Probiotics induce an increase in the number of intestinal bacteria. Beneficial effects are likely due to a multitude of actions, including modulation of immune function leading to stimulated host defense mechanisms; downregulation of inflammatory cytokines resulting in decreased chronic gut inflammation; enhanced immunoglobulin (Ig)G/IgA antibody responses to bad bacteria; and reduced production of allergen-specific IgE production. The benefits of probiotics in preventing and treating GI disease are likely due to a combination of direct competition between the probiotic and pathogenic bacteria in the gut and GI-tract immunomodulation.3-5

Probiotic use has been advocated for a wide range of disease states, with varying degrees of supporting evidence. Most of the benefit is observed with GI diseases. Disease states with clinical studies validating the use of probiotics include viral diarrhea, antibiotic-associated diarrhea (AAD), Clostridium difficile–associated diarrhea (CDAD), traveler’s diarrhea, atopic dermatitis, pouchitis, and irritable bowel syndrome.1 However, probiotics’ beneficial effects may extend to additional disease states, including rheumatoid arthritis, Crohn’s disease, dental caries, asthma, and colon cancer.1

There are a multitude of disease states obtaining varying degrees of benefit from probiotics, but this article will focus on the use of probiotics for GI diseases in children.

In the United States, probiotics are available primarily as dietary supplements in capsule, tablet, or powder formulations. In addition, probiotics occur in yogurt, sauerkraut, and other fermented foods.7 Some of the more common probiotic products in the U.S. are listed in TABLE 1. 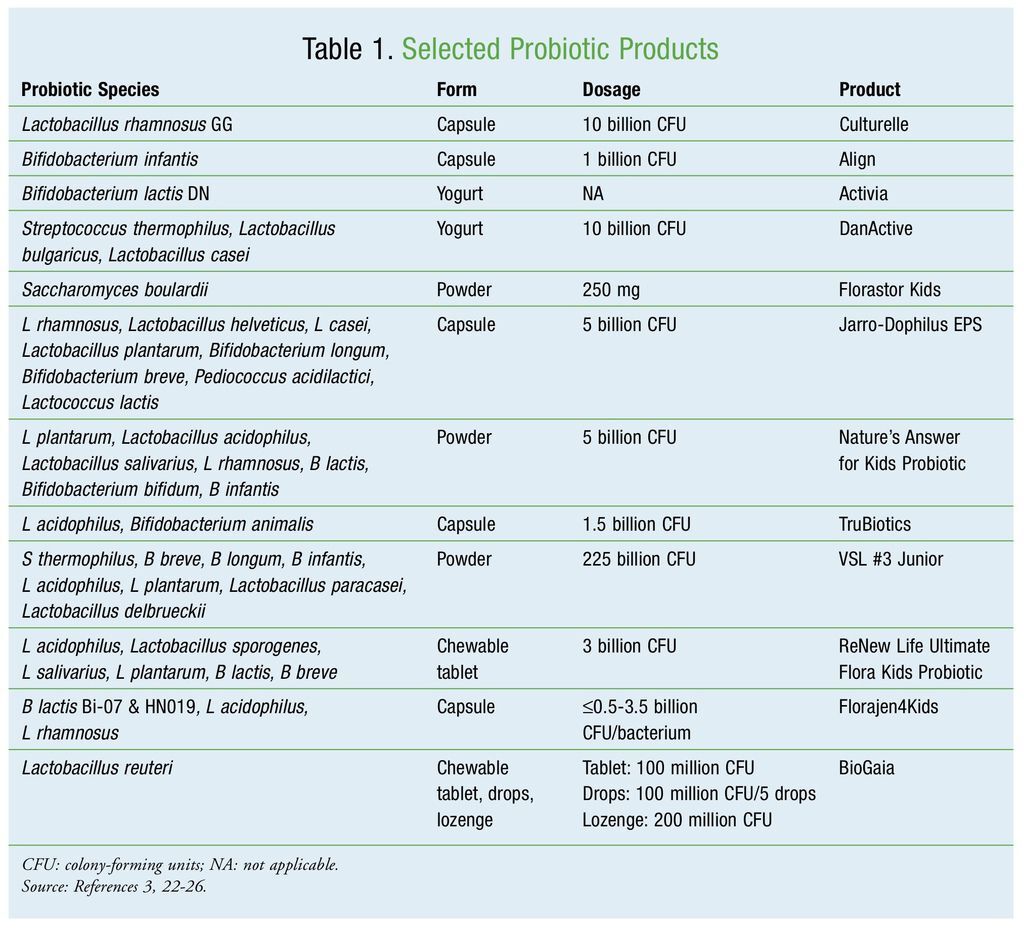 There are many different types of diarrhea, including infectious diarrhea, CDAD, and AAD. The World Health Organization defines diarrhea as three or more loose or watery bowel movements per day, or more frequent bowel movements than normal for that individual.8 Infectious diarrhea can be caused by any type of bacteria, whereas only C difficile causes CDAD. AAD is defined as three or more loose bowel movements for 2 or more days within 14 days of starting antibiotic therapy.6 Diarrhea may be considered either acute or persistent, with persistent diarrhea lasting for at least 14 days.9

Diarrheal disorders in pediatric patients place a significant burden on the patient, caregivers, and the healthcare system. Because of their role in modifying the gut microflora, probiotics have been studied in the management of many diarrheal disorders, including acute infectious diarrhea and AAD.

Acute Infectious Diarrhea: Infectious diarrhea is a common disease worldwide and is most common in developing countries. Most of the time, diagnostic and confirmatory tests are not performed to discover the specific bacterium that caused the diarrhea.10 Several randomized, controlled trials have evaluated the use of probiotics for acute infectious diarrhea in children.

A different meta-analysis found that administration of probiotics to otherwise healthy children aged <5 years with acute diarrhea reduced the diarrhea duration by 0.8 days (95% CI –1.1 to –0.6 days, P <.001). The trials in this analysis used various probiotics, including lactobacilli, Streptococcus thermophilus, S boulardii, bifidobacteria, enterococci, or combinations of these.13

A Cochrane review concluded that probiotics administered to patients with acute infectious diarrhea reduced the mean duration of diarrhea by 24.76 hours (95% CI 15.9 to 33.6 hours), reduced the incidence of diarrhea lasting ≥4 days (risk ratio [RR] 0.41, 95% CI 0.32-0.53), and decreased stool frequency by 0.8 stool on day 2 (95% CI 0.45-1.14). Both adults and children were studied, but 80% of participants were aged <18 years. A wide variety of probiotics were used, with Lactobacillus GG, S boulardii, and enterococci being the most common.10

Overall, these analyses provide evidence supporting the use of probiotics, especially Lactobacillus in doses ≥10 billion CFU per day, to achieve a reduction in diarrhea duration of approximately 1 day.14 The studies used several different strains and doses of probiotics. Further study is needed to better delineate the populations receiving the greatest clinical benefit from probiotics, as well as the most effective dose, frequency, and type of probiotic.

AAD: Diarrhea commonly occurs secondary to antibiotic use. About 30% of patients taking antibiotics experience diarrhea, through a variety of mechanisms.6 Antibiotics may kill the good bacteria in the patient’s gut, creating opportunities for pathogenic organisms to overtake the gut. Diarrhea is a common adverse effect (AE) in children receiving antibiotics, especially antibiotics with activity against anaerobic organisms. The use of probiotics as preventive therapy (initiated concurrently with antibiotic therapy) for AAD has been studied in several randomized, controlled trials.

A meta-analysis reviewed trials of probiotics compared with placebo on the risk of AAD in children. Probiotics reduced the risk of AAD from 28.5% to 11.9% (RR 0.44, 95% CI 0.25-0.77). This analysis suggests that for every seven patients who would develop AAD, one fewer would develop it if probiotics were administered along with antibiotics.17 The studies employed a number of different probiotics and varying dosing.

A Cochrane review suggests an overall benefit of probiotics in preventing AAD despite differences in probiotic strain, dose, and duration, as well as issues with study quality that affected the validity of the data. In a subgroup analysis, the use of high-dose probiotics (≥5 billion CFU/day) provided a number needed to treat (NNT) of seven patients to prevent one case of diarrhea in children receiving antibiotics (NNT 7; 95% CI 6-10).18

This evidence suggests that probiotics may be beneficial in reducing the incidence of AAD in children. However, there is a lack of large, well-designed, randomized trials assessing the true impact.

CDAD: Although infectious diarrhea and AAD are fairly common, CDAD occurs in about four of every 1,000 hospital admissions in children.19 Whenever the normal gut flora are upset, there is a possibility that harmful bacteria can grow out of control. One of the worst bacteria that can then overwhelm the gut flora is C difficile. C difficile infection can present with a wide range of symptom severity. Antibiotics are used to kill the overgrowth of C difficile bacteria.

A Cochrane review evaluated the use of probiotics for preventing CDAD in adults and children receiving antibiotics. There was a 64% relative risk reduction in CDAD incidence from 5.5% in the placebo or no-treatment group to 2% in the probiotic group, but this was considered only a moderate reduction overall.20

Given the growing use of probiotics to treat a variety of disease states, a review of safety concerns is warranted. Probiotics are live microorganisms and therefore carry the risk of producing an active infection, although this risk is quite low.

A recent meta-analysis was conducted to assess the safety profile of probiotics.7 This analysis of randomized, controlled trials, case series, and case reports investigated all probiotic agents, but the large majority of trials involved Lactobacillus and Bifidobacterium. The most commonly observed AEs included bacterial sepsis, fungemia, and GI ischemia. The true incidence of AEs is hard to quantify, since much information regarding their negative impact comes from small case series or case reports. However, patient populations that may be at higher risk for AEs could include critically ill ICU patients, patients with any kind of immunodeficiency, and patients with indwelling central venous catheters.7,10 Overall, evidence suggests that probiotics are safe, but that their use in higher-risk patient populations should be carefully considered.

There are several challenges with adopting probiotics as a definitive treatment option. In the majority of foods produced in the U.S., all living organisms have been eradicated in order to enhance shelf life, so few probiotic-containing products are available. Many patients are afraid to use probiotics because they are living microorganisms that confer the risk of active infection.

There is also a great degree of confusion over probiotic agents. Many products make numerous health claims, not all of them based on scientific literature. This can confuse the consumer in terms of unwarranted anticipated benefits. When there is proven benefit in clinical trials, information on the exact dose and type of probiotic can be hard to find, making it difficult for pharmacists to recommend appropriate products.

All of these challenges contribute to a lack of knowledge about differences in available microorganisms and recommended doses or treatment effects.

As the field of probiotics continues to expand in the U.S., so does the need for pharmacist awareness of probiotic use. Probiotics, specifically Lactobacillus 10 billion CFU per day, may decrease the duration of infectious diarrhea and may also reduce the incidence of AAD. The benefits of probiotics for CDAD remain unclear. Pharmacists must be able to identify specific product formulations, doses, and strain availability while also communicating the effects of probiotics to patients. 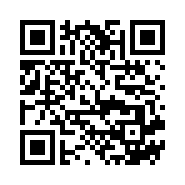