Oxford Centre for Evidence-based Medicine Levels of Evidence (May 2001) 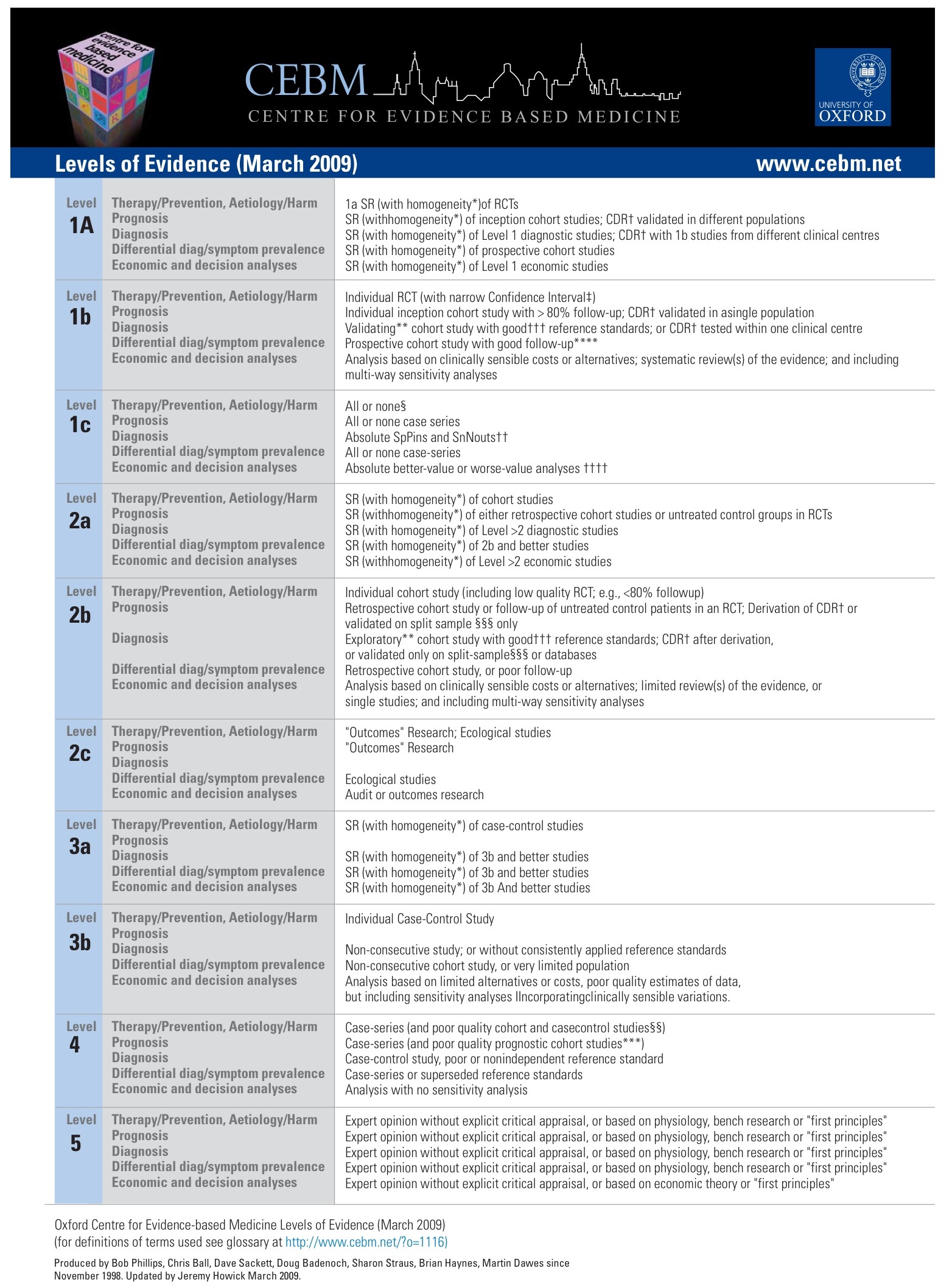 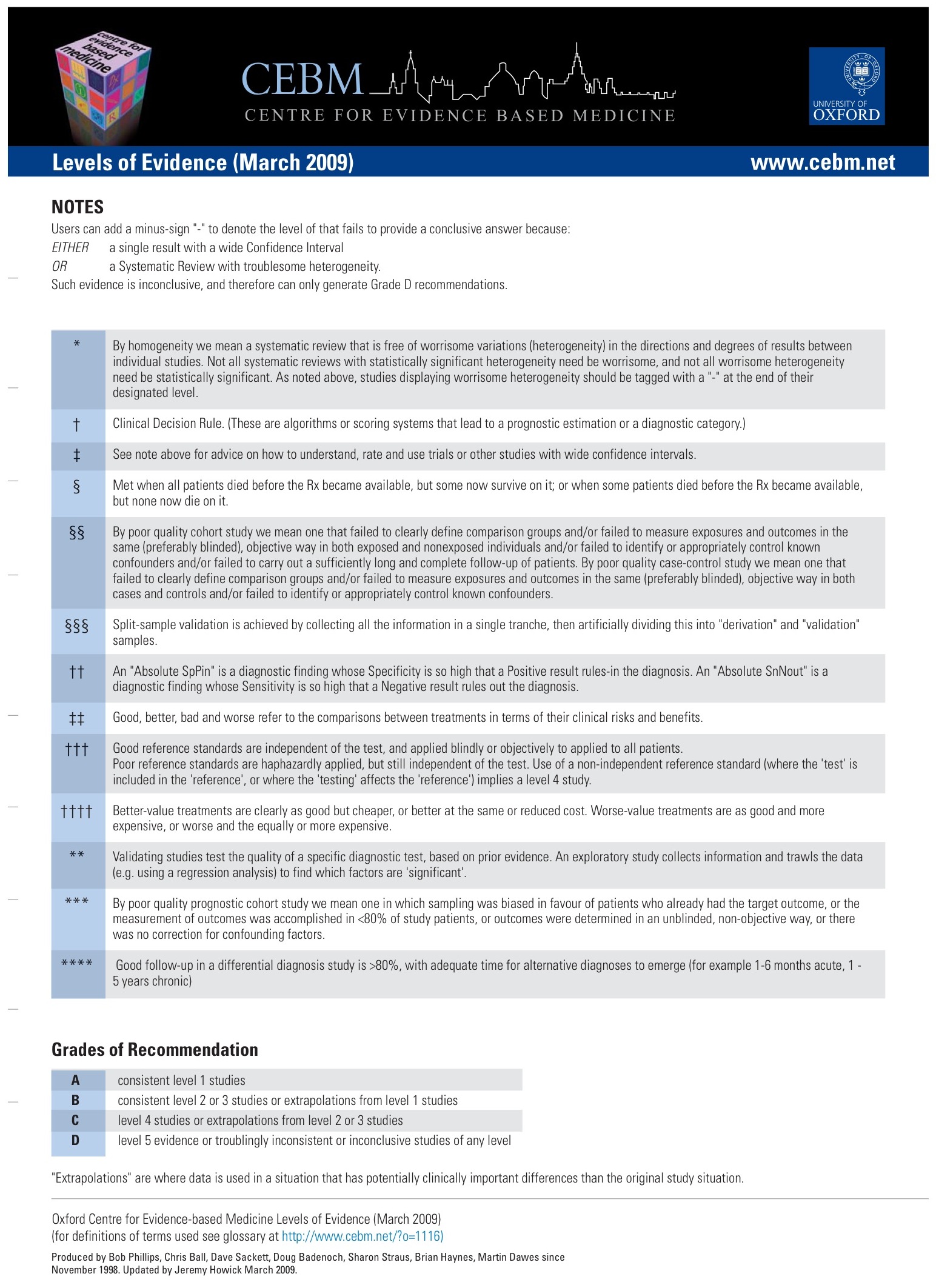 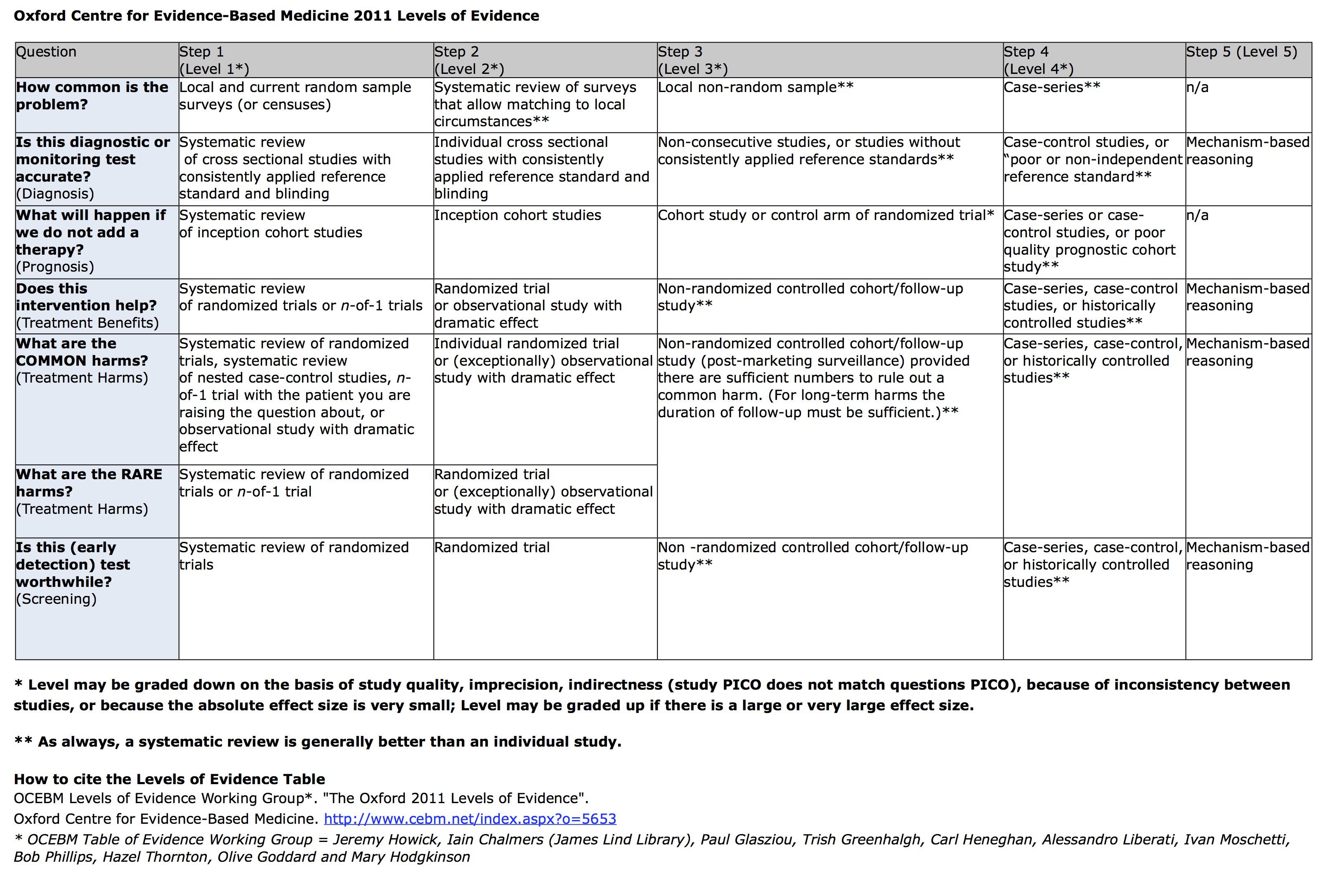 †Levels of evidence:
A = data are derived from multiple randomized clinical trials or meta-analyses;
B= data are derived from a single randomized trial or nonrandomized studies;
C = only consensus opinion of experts, case studies, or standard of care.
Circulation 2006 114: 1761 – 1791.
Systems to stratify evidence by quality have been developed, such as this one by the U.S. Preventive Services Task Force for ranking evidence about the effectiveness of treatments or screening:
The UK National Health Service uses a similar system with categories labeled A, B, C, and D. The above Levels are only appropriate for treatment or interventions; different types of research are required for assessing diagnostic accuracy or natural history and prognosis, and hence different "levels" are required. For example, the Oxford Centre for Evidence-based Medicine suggests levels of evidence (LOE) according to the study designs and critical appraisal of prevention, diagnosis, prognosis, therapy, and harm studies:
A newer system is by the Grade Working Group and takes in account more dimensions that just the quality of medical evidence. "Extrapolations" are where data is used in a situation which has potentially clinically important differences than the original study situation. Thus, the quality of evidence to support a clinical decision is a combination of the quality of research data and the clinical 'directness' of the data.
Despite the differences between systems, the purposes are the same: to guide users of clinical research information about which studies are likely to be most valid. However, the individual studies still require careful critical appraisal.
Note: The all or none principle is met when all patients died before the Rx became available, but some now survive on it; or when some patients died before the Rx became available, but none now die on it.
Categories of recommendations
In guidelines and other publications, recommendation for a clinical service is classified by the balance of risk versus benefit of the service and the level of evidence on which this information is based. The U.S. Preventive Services Task Force uses:
Task Force Ratings
Strength of Recommendations
The U.S. Preventive Services Task Force (USPSTF) grades its recommendations according to one of five classifications (A, B, C, D, I) reflecting the strength of evidence and magnitude of net benefit (benefits minus harms).
A.— The USPSTF strongly recommends that clinicians provide [the service] to eligible patients. The USPSTF found good evidence that [the service] improves important health outcomes and concludes that benefits substantially outweigh harms.
B.— The USPSTF recommends that clinicians provide [this service] to eligible patients. The USPSTF found at least fair evidence that [the service] improves important health outcomes and concludes that benefits outweigh harms.
C.— The USPSTF makes no recommendation for or against routine provision of [the service]. The USPSTF found at least fair evidence that [the service] can improve health outcomes but concludes that the balance of benefits and harms is too close to justify a general recommendation.
D.— The USPSTF recommends against routinely providing [the service] to asymptomatic patients. The USPSTF found at least fair evidence that [the service] is ineffective or that harms outweigh benefits.
I.— The USPSTF concludes that the evidence is insufficient to recommend for or against routinely providing [the service]. Evidence that the [service] is effective is lacking, of poor quality, or conflicting and the balance of benefits and harms cannot be determined.
Quality of Evidence
The USPSTF grades the quality of the overall evidence for a service on a 3-point scale (good, fair, poor):
Good: Evidence includes consistent results from well-designed, well-conducted studies in representative populations that directly assess effects on health outcomes.
Fair: Evidence is sufficient to determine effects on health outcomes, but the strength of the evidence is limited by the number, quality, or consistency of the individual studies, generalizability to routine practice, or indirect nature of the evidence on health outcomes.
Poor: Evidence is insufficient to assess the effects on health outcomes because of limited number or power of studies, important flaws in their design or conduct, gaps in the chain of evidence, or lack of information on important health outcomes.
其他相關網站連結：
GRADE working group
http://www.gradeworkinggroup.org/
uptodate
http://www.uptodate.com/home/grading-guide#GradingRecommendations
BMJ
http://clinicalevidence.bmj.com/x/set/static/ebm/learn/665072.html 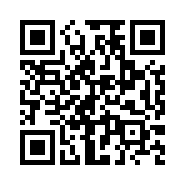