Allergic rhinitis (AR), also known as hay fever, disrupts the life of millions of Americans. Pharmacists are often asked to recommend products for this condition. In order to make the most appropriate recommendations, pharmacists should be aware of the prevalence, etiologies, manifestations, and possible approaches to preventing and treating AR.

AR is not a reportable disease, forcing epidemiologists to estimate that at least 20% of Americans and 30% of the world’s population overall suffer from the condition.1-3 The annual impact of such a common disorder is estimated as 10 million physician visits, 28 million days of restricted activity, 10 million missed days of work, and 2 million missed days of school.2

There is no discernible epidemiologic preference for gender or ethnicity.2 However, age is a strong predictor of AR occurrence, and it is considered the most common chronic disease of childhood.4 The immune system needs several exposures to potential allergens for AR to manifest. Three exposures to the same set of pollens are usually required to cause allergy to them.2 Thus, ages 4 or 5 become common years of onset. During adolescence and young adulthood, the prevalence is 10% to 15%, but the peak is at age 30 years.

AR is induced by inhalation of an aeroallergen to which the patient has previously been sensitized, which initiates a cascade of events involving immunoglobulin E (IgE) and leading to degranulation of mast cells/basophils and the subsequent release of preformed inflammatory mediators.5

A wide range of aeroallergens can trigger the symptoms of AR. To narrow down the list of potential allergens for purposes of identification and avoidance, clinicians classify AR into two broad categories: seasonal or perennial.6 Perennial AR occurs year-round, leaving the patient prone to episodes at any time. Aeroallergens triggering perennial AR are common environmental contaminants such as dog/cat dander, dust mite residue, window cleaning sprays, cosmetics, cigarette smoke, cockroaches, and molds.7,8

By contrast, patients with seasonal AR only experience symptoms at one or more specific times of the year. When they are given allergy testing, they are often found to react to a plant whose pollen enters the atmosphere at the peak times of symptom manifestation, such as trees (peaking March-June), grasses (May-August), or weeds (August-October).1,2,9

Allergen identification is important in planning strategies to prevent AR through avoidance and environmental control.1 However, there are two reasons why it is not vital for the pharmacist to help the patient determine the type of AR from which he or she suffers. First, many patients have already undergone allergen testing, and causes have been identified by other professionals. Second, the nonprescription products sold for AR are equally effective against seasonal and perennial AR.

Patients may suffer from both types of AR, such as perennial AR caused by cigarette smoke and seasonal AR caused by wheat pollen. In this case, symptoms may be present at any time of the year, but can be especially troublesome during peak pollen days. Mold spore allergy can cause both types—household mold in the bathroom causing constant exposure, and environmental mold after rains causing a more seasonal AR.

Allergen exposure gives rise to a syndrome of numerous possible manifestations. Four are considered the cardinal symptoms of AR—nasal congestion, rhinorrhea, sneezing, and nasal pruritus.1 The two symptoms involving the nose can give rise to much discomfort. Nasal congestion interferes with breathing and the sense of smell, forcing patients to blow their noses to clear it. Within a short period, the nasal passages can begin to run uncontrollably, producing a clear, thin discharge that necessitates continual removal by blotting or blowing. Nasal itching arises in the posterior internal nares, and many patients can only find relief by placing the heel of the hand on the nose and pushing upward with force. This move is so universal among AR sufferers that it has been termed the “allergic salute.”

Sneezing comes on abruptly and is not usually the loud lung-clearing sneezes of the common cold. Rather, AR sneezing is most often described as paroxysms of shallow, barely audible sneezes, as many as 10 to 20, one following the other incessantly.

The most obvious advice for patients with AR would be complete avoidance of the offending allergen(s).1 However, this is difficult at best and may be virtually impossible, depending entirely on the distribution of the specific allergen(s) in the environment.10 Due to the impracticality or virtual impossibility of allergen avoidance, many patients require medical therapy. The pharmacist’s advice is critical in pointing out the relative advantages and disadvantages of each. 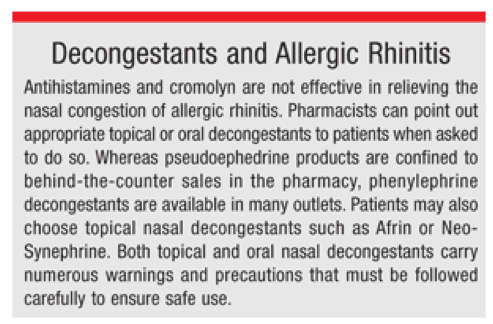 Antihistamines (both first- and second-generation) alleviate sneezing; runny nose; itching of the nose, throat, and eyes; and watering of the eyes caused by AR or other upper respiratory allergies.1,11 First-generation antihistamines include diphenhydramine (Benadryl), chlorpheniramine (Chlor-Trimeton), and clemastine (Tavist). All are contraindicated in patients with difficulty in urination due to enlargement of the prostate gland, glaucoma, or breathing problems such as emphysema or chronic bronchitis unless they are advised to take them by a physician.1 These products should only be used by women who are pregnant or breastfeeding with the advice and supervision of a physician. The patient age must also be noted carefully before the pharmacist makes a recommendation for a first-generation antihistamine. None are FDA approved for use in patients under the age of 6 years.1

Because of the propensity for antihistamines to cause drowsiness, pharmacists should warn patients against driving or operating heavy machinery after using these products. Labels also warn patients not to use them with alcohol, sedatives, or tranquilizers. Diphenhydramine (DPH) is labeled as causing “marked” drowsiness, indicating its higher sedative potential when compared to chlorpheniramine or clemastine. This fact is put to use by the pharmaceutical industry, which includes DPH as a sleep aid in such products as Sominex and Nytol. When DPH purchase is contemplated for AR, pharmacists must point out a label warning against concurrent use with any form of oral or topical DPH. This warning is critical, as concurrent use of two or more DPH products may cause dilated pupils, flushed face, hallucinations, ataxic gait, and urinary retention.1

While first-generation antihistamines are still widely sold, their greater incidence of sedation has caused them to be largely eclipsed by the “nonsedating” second-generation antihistamines. Three are now available on a nonprescription basis: loratadine (Claritin/Alavert), cetirizine (Zyrtec), and fexofenadine (Allegra), which was introduced this year.12-14

Drowsiness Potential:Claritin/Alavert and Allegra are generally considered nonsedating. Zyrtec is grouped with the other two, but a careful examination of its nonprescription product label reveals that it has a greater potential for drowsiness. Unlike nonprescription loratadine/fexofenadine products, nonprescription cetirizine labels carry specific warnings that drowsiness may occur, and warns patients that they must be careful when driving a motor vehicle or operating machinery, should avoid alcoholic drinks, and should ask a doctor or pharmacist before use if they are taking sedatives or tranquilizers, as they may increase drowsiness. Thus, the patient with concerns about drowsiness might benefit from a recommendation for loratadine or fexofenadine rather than cetirizine.12-14

Medical Contraindications: All three nonprescription second-generation antihistamines are contraindicated in patients who have kidney disease, with the label indicating that a physician may need to recommend a dose that differs from that on the label. Loratadine and cetirizine products are also contraindicated for use by patients with liver disease for the same reason, while fexofenadine products do not carry this warning. Women who are pregnant or breastfeeding are advised not to use any of the three without the advice of their physician.12-14

Age Contraindications: The patient age must be determined prior to making a recommendation for a second-generation antihistamine. Zyrtec and Allegra carry a warning against medically unsupervised use if the patient is 65 years of age and over. However, Claritin is safe for self-administration in patients aged 65 years and older (first-generation antihistamines are also safe for this population).12-14

Medication/Food Warnings: Two of the three products carry allergy or interaction warnings concerning medications or foods. Zyrtec must not be taken by patients with an allergy to hydroxyzine, and Allegra carries warnings against taking it with fruit juice or using it at the same time as aluminum or magnesium-containing antacids.13,14

The pharmacist can also suggest a trial of intranasal cromolyn sodium (Nasalcrom) for patients aged 6 years and above.1,15 Used as directed one week before exposure to a known or suspected allergen, it can prevent symptoms from developing. Nasalcrom can also be used each day that the patient is in contact with the provoking agent. It should not be recommended for patients with fever, discolored nasal discharge, sinus pain, wheezing, sinus infection, asthma, or cold symptoms.

What Are the Symptoms of AR?

AR typically causes several symptoms. First, the nose is congested so badly that you can hardly breathe. Second, the nose runs with a large amount of clear, watery discharge. Nasal congestion and runny nose usually alternate back and forth continually throughout the day. Third, the nose itches, and the source is deep in the nostrils. Frequently, you can only relieve it by pushing the nose upward with great force using the heel of your hand. Fourth, AR causes frequent bouts of sneezing. These sneezes are not deep, loud, and disruptive, but are more commonly quiet, shallow, and almost unheard by those around the patient. They also occur in groups of 10 to 20 sneezes in a row. Fifth, the patient also frequently has eye problems. They include a blue discoloration under the eyes, red/itchy eyes, and tearing.

Is AR the Same as a Cold?

AR may appear at first to be a cold, but their causes are different. Viruses cause colds, while AR is caused by allergens such as pollen, mold, dust mites, pet dander, and cigarette smoke. Colds also cause cough and sore throat, but do not usually cause nasal itching, eye problems, or frequent shallow sneezes.

This makes a great difference in the treatment of both conditions. While the cold is treated with medications for cough and sore throat, these medications are not useful for AR in most cases. Decongestants may be useful in either condition. However, the standard nonprescription treatments for AR are antihistamines (e.g., Claritin, Zyrtec, Allegra, Benadryl, Chlor-Trimeton, Tavist) and intranasal cromolyn sodium (Nasalcrom). There are also many combination products available that contain both an antihistamine and a decongestant.

While antihistamines may relieve a runny nose of the common cold, Nasalcrom should not be used for a cold at all. Thus, nonprescription therapy for each condition is quite different. Consult Your Pharmacist for further information on nonprescription treatment.

If nonprescription products do not seem to help your problem, you may wish to explore other options. The most important step in dealing with AR is to get professional help. To do this, it is best to make an appointment with an allergist, a physician who is board-certified in allergy identification. You can find the allergist closest to you by consulting the Web site of the American College of Allergy, Asthma, & Immunology (www.acaai.org/allergist/Pages/locate_an_allergist.aspx). You should consider visiting physician practitioners who appear on this list in preference to those who do not. Treatment may begin with allergen testing to identify what you are allergic to, followed by trials of prescription medications, such as nasal sprays and oral tablets. Follow the directions on your prescription exactly.

Can AR Be Cured?

Unfortunately, AR is not “curable” like many other medical conditions, although the attacks may lessen with time. While symptoms can be relieved somewhat by certain medications and by injections (i.e., allergy shots), AR is a chronic condition that is prone to recurrence. 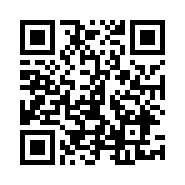