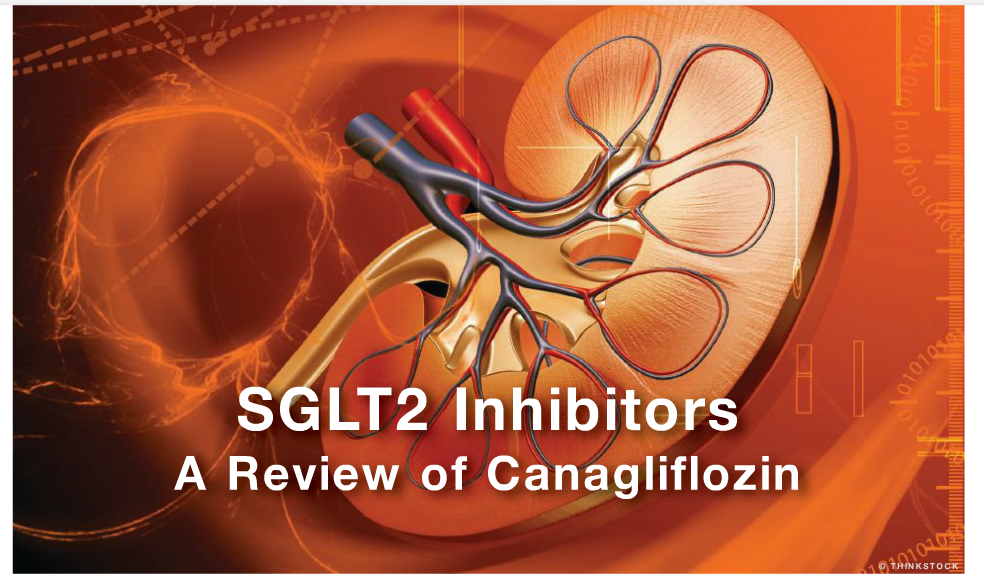 ABSTRACT: With the progressive nature of diabetes, patients need additional methods to maintain glucose control. Canagliflozin (Invokana), a novel medication for treatment of type 2 diabetes, provides an alternative for patients who are not well controlled on current drug therapy or diet and exercise. It works by inhibiting the sodium-glucose co-transporter 2 (SGLT2) in the kidney, thus leading to increased glucose excretion. Canagliflozin is the first FDA-approved SGLT2 inhibitor.

The kidney has historically been ignored as a potential target organ for the pharmacologic mitigation of hyperglycemia, as it was primarily considered an organ of elimination and a regulator of salt and ion balance. The kidney was once mistakenly thought to be the structural cause of diabetes, and in later years has essentially been ignored as a regulator of glucose homeostasis. Today, however, it is now recognized as an important contributor to glucose regulation. In line with this, we now have a clearer understanding of the physiology of glucose transport via specific carriers such as the sodium-glucose co-transporters (sodium-glucose linked transporters), or SGLTs.

In the early 1800s, the natural compound phlorizin was isolated. It was initially referred to as the “glycoside from the bark of apple trees” and was later shown to cause glucosuria. Phlorizin itself was not pursued as a medication for the treatment of diabetes in humans because the compound is poorly absorbed from the gastrointestinal (GI) tract and is nonselective in its inhibition of the target transporter.1 It was recognized, however, that the effect of a “phlorizin-like compound” on renal glucose transporters might offer a novel mechanism for the management of hyperglycemia.

This discovery has led to the development of several SGLT2 inhibitors. Dapagliflozin is approved in Europe and is also being developed for potential use in the United States. The initial FDA application was rejected but was resubmitted in July 2013.2 A New Drug Application (NDA) for a second compound, empagliflozin, was recently submitted to the FDA and is currently under review.3 Another compound, canagliflozin, has been approved for use in the U.S. and is currently marketed under the trade name of Invokana by Janssen Pharmaceuticals.4 It is the first of its class approved for use in the U.S. and will be the focus of this review.

This article will discuss the role of the kidney in glucose homeostasis, explain the mechanism of action of SGLT inhibitors, and provide an overview of the clinical trials leading to the approval of canagliflozin, as well as information regarding the appropriate use of this compound.

Glucose Homeostasis and the Kidney

After glucose is ingested, an increase in plasma glucose concentration triggers insulin release, which in turn stimulates splanchnic and peripheral glucose uptake and suppression of endogenous glucose production. Under normal circumstances in healthy individuals, blood glucose levels are tightly regulated within the range of 70 to 99 mg/dL and rarely exceed 140 mg/dL following postprandial consumption.1 These narrow ranges are maintained under a complex system that includes multiple hormones (e.g., insulin and glucagon), central and peripheral nervous system metabolic needs, and various cells and tissues (e.g., brain, muscle, GI tract, liver, kidney, and adipose tissue), which regulate the uptake, metabolism, storage, and excretion of glucose.

Glucose utilization takes place primarily (over 80%) in the muscle. This glucose is utilized directly for energy or stored as glycogen. Under normal conditions, approximately 5% of peripheral glucose is taken up by fat tissue.6 The liver preferentially stores absorbed glucose in the form of glycogen when under the influence of insulin.

With normal kidney function, 99% of filtered glucose is reabsorbed during periods of euglycemia. The glomerular filtration rate (GFR) and plasma glucose concentration govern the rate of glucose filtration. Under normal conditions, most if not all of the filtered glucose is reabsorbed. However, there is a maximum rate at which glucose can be reabsorbed (~375 mg/min in an average patient).1 The most salient SGLT in the kidney is SGLT2. SGLT2 accounts for approximately 90% of glucose reabsorption in the kidney and, because of this, has become the focus of this new category of medications, the SGLT2 inhibitors.1 SGLT2 transporters are found at a relatively high density on the brush-border membrane of the S1 (early) segment of the proximal convoluted tubule. This transporter binds with both sodium ions (Na+) and glucose in the tubular filtrate. These compounds are then translocated across the cell membrane.7 Functionally, this process is driven by the electrochemical Na+ gradient between the tubular filtrate and the intracellular space and is called secondary active-transport (FIGURE 1).7 Glucose in the tubular epithelial cell is then transported down a concen-tration gradient across the basolateral membrane to the systemic circulation by GLUT1. 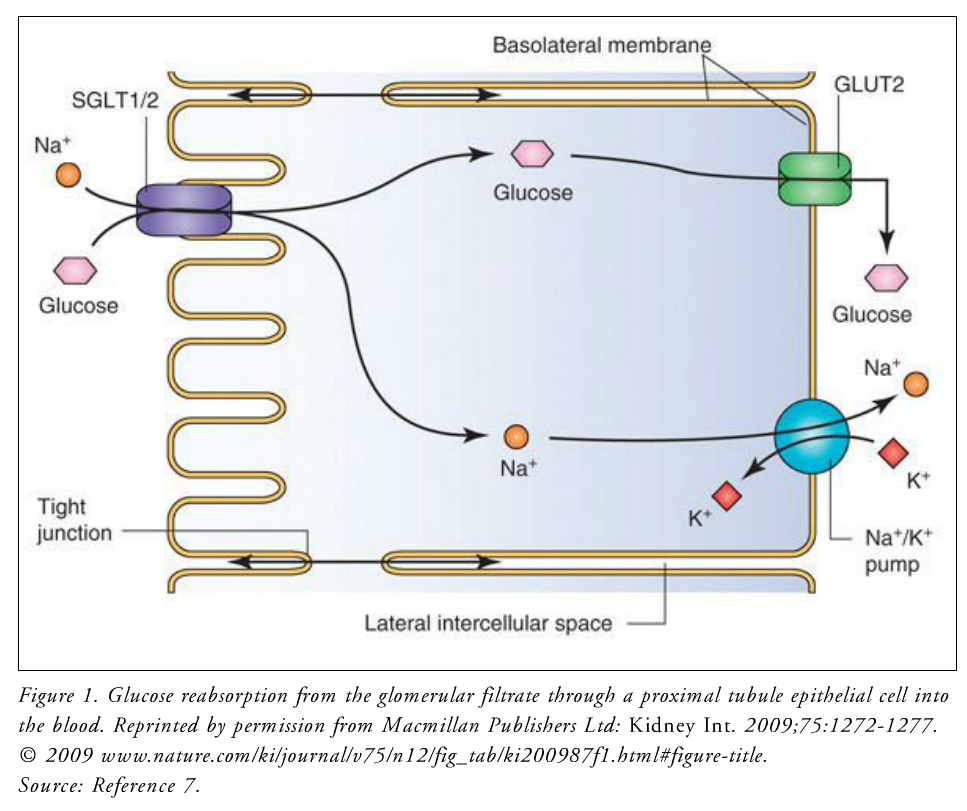 When the rate of glucose absorption exceeds 375 mg/min, glucose is excreted in the urine because its concentration has exceeded the ability of the SGLT2 transporters to reabsorb it.1 In most nondiabetic persons, glucose concentrations will never be high enough to exceed the kidney’s ability to reabsorb the presented glucose. However, in patients with diabetes, glucosuria is common with blood glucose of 180 mg/dL or higher.1 SGLT2 inhibitors modulate this pathway by reducing the reabsorptive capacity of the renal tubules, with a resultant elimination of excess glucose. Thus, the mechanism of action of the SGLT2 inhibitors is to simply inhibit the transporter, which in turn reduces the reabsorption of filtered glucose and lowers the renal threshold for glucose. The net result is an increase in urinary glucose excretion, which results in a reduction in blood glucose levels.8

Overview of Clinical Trials With Canagliflozin

Many studies have evaluated canagliflozin and its use in the treatment of type 2 diabetes mellitus. Published trials have explored its role as monotherapy and as an add-on for dual- or triple-drug therapy. Ongoing studies are now evaluating pharmacokinetic and pharmacodynamic effects as well as the influence of canagliflozin on cardiovascular endpoints.

Canagliflozin has been studied in the CANTATA trials (CANagliflozin Treatment And Trial Analysis) as mono-therapy or as add-on therapy to metformin, metformin and sulfonylureas, and metformin and pioglitazone. Each trial was randomized, double-blind, placebo- or active-controlled, examining change from baseline glycated hemoglobin (A1C) at 26 weeks or 52 weeks.8,9 The impact on A1C using canagliflozin as monotherapy was evaluated in the CANTATA-M trial.8,9   Both canagliflozin doses produced a statistically significant decrease in A1C (P <.001) and reduction of systolic blood pressure (100 mg by -3.7 mmHg and 300 mg by -5.4 mmHg from placebo, P ≤.001) as well as body weight (100 mg by -2.2 kg and 300 mg by -3.3 kg from placebo, P ≤.001). Like CANTATA-M, both CANTATA-D and CANTATA-MP showed a significant reduction of A1C, body weight, and systolic blood pressure for both doses of canagliflozin.8,9

Canagliflozin was also studied as an add-on to insulin therapy in an 18-week, double-blind, placebo-controlled trial in a subset of the CANVAS trial (CANagliflozin cardioVascular Assessment Study).8 Participants were enrolled into the study if they were not well controlled on insulin, on ≥30 units of insulin per day, or on insulin with oral antihyperglycemic medications. Both canagliflozin doses of 100 and 300 mg showed a significant reduction in A1C, weight, and systolic blood pressure (P <.001). All of the CANTATA trials, as well as the insulin trial, are summarized in TABLE 1.8,9 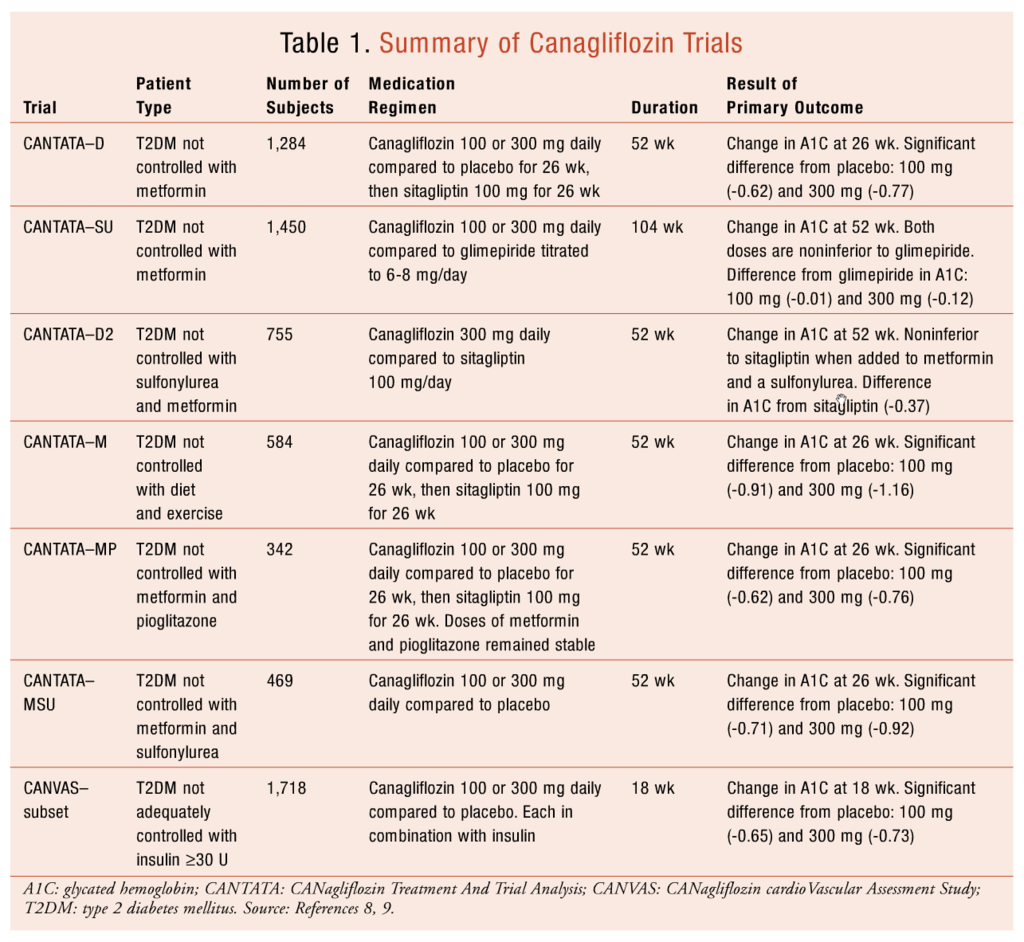 Two studies have been completed using canagliflozin in special patient populations. One studied its use in adults aged 55 to 80 years.8 The trial showed canagliflozin was safe and effective in this age group for patients not adequately controlled with diet and exercise alone. The other trial reviewed canagliflozin use in patients with moderate renal dysfunction.8 Two hundred sixty-nine participants with a GFR between 30 and 50 mL/min/1.73 m2 were randomized to receive either canagliflozin 100 or 300 mg or placebo. The study demonstrated safety and efficacy for patients with moderate renal dysfunction who are not controlled on a current diabetes medication regimen.8

Canagliflozin is a once-daily oral medication indicated for adults with type 2 diabetes mellitus to improve glucose control in conjunction with diet and exercise.8 It is not recommended for the treatment of children, type 1 diabetes mellitus, or diabetic ketoacidosis. Canagliflozin is also contraindicated for patients receiving hemodialysis, who have severe renal dysfunction, or have a history of severe hypersensitivity to canagliflozin. The recommended starting dose is 100 mg by mouth daily taken 30 minutes prior to the first meal of the day. Doses can be increased to 300 mg orally per day in those individuals who need further glucose management. Patients who need a dosage increase must have normal renal function and must be tolerating the 100 mg dose. No adjustment of dosage is recommended in mild renal impairment (GFR >60 mL/min/1.73 m2). The dosage of canagliflozin is limited to 100 mg per day in patients with a GFR of 45 to 60 mL/min/1.73 m2 and is not recommended in severe renal impairment of <45 mL/min/m2. Coadministration with inducers of the UDP-UGT enzyme, rifampin, phenytoin, phenobarbital, and ritonavir may require an increased daily dose of 300 mg.8

Precautions, warnings, and adverse effects to consider prior to initiating canagliflozin are hypotension, impairment of renal function, hyperkalemia, hypoglycemia, genital mycotic infections, hypersensitivity reactions, and increases in low-density lipoprotein (LDL).8 Hypotension is caused through intravascular volume contraction and osmotic diuresis. Prior to initiation, it is important to ensure that the patient is euvolemic because of this potential adverse effect. Patients at increased risk of hypovolemia due to canagliflozin are those receiving diuretics, angiotensin-converting enzyme (ACE) inhibitors, or angiotensin receptor blockers; the elderly; and those who have renal impairment or low blood pressure. Decreases in renal function can occur with canagliflozin, particularly in patients with hypovolemia. During clinical trials, a dose-dependent increase in serum creatinine occurred and was greater in those individuals with decreased baseline renal function. Pooled data from four clinical trials in which patients had normal-to-mild renal dysfunction demonstrated at least one event of significant reduction in renal function, defined as a 30% decrease from baseline or a GFR <80 mL/min/1.73 m2 at the end of treatment (0.5% with placebo, 0.7% with canagliflozin 100 mg, and 1.4% with canagliflozin 300 mg).8

Risk of hyperkalemia is greater in patients with renal dysfunction who receive other medications that affect potassium excretion. The effects on potassium are also dose related and transient. Elevations of potassium occurred early in the course of therapy and could be severe. Increases in both magnesium and phosphate were also seen in the clinical trials.8

Monitoring for canagliflozin should include monitoring for genital mycotic infections and bacterial UTIs for both males and females. Blood chemistries should be checked early and periodically in the course of treatment for changes in potassium, magnesium, phosphorus, and renal function. Blood pressure and other functions that could be adversely affected by volume depletion should be followed in patients. Blood glucose should also be monitored for both the safety and efficacy of canagliflozin.

Drug-drug interactions are minimal with canagliflozin. Patients concurrently taking digoxin and canagliflozin need close monitoring of digoxin levels. An increase of AUC and peak concentration of digoxin was seen in patients receiving both drugs.8 Canagliflozin is a UGT enzyme substrate. As previously stated, reduction of canagliflozin levels occurs with strong inducers of UGT enzymes, specifically phenytoin, phenobarbital, rifampin, and ritonavir.8

Canagliflozin provides a novel mechanism of action to treat patients with type 2 diabetes who are not currently controlled. Recent studies demonstrate that it is safe and effective for treatment as monotherapy or as add-on therapy to other oral antihyperglycemic agents or insulin. Canagliflozin demonstrates significant reductions in A1C but also provides reductions in body weight and systolic blood pressure. The most common adverse effect is risk of UTIs and mycotic genital infections. Further studies are being conducted to delineate the drug-’s impact on cardiovascular outcomes. As this evidence becomes available, the role of canagliflozin will be further evaluated. 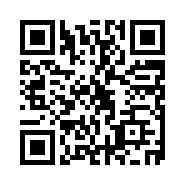