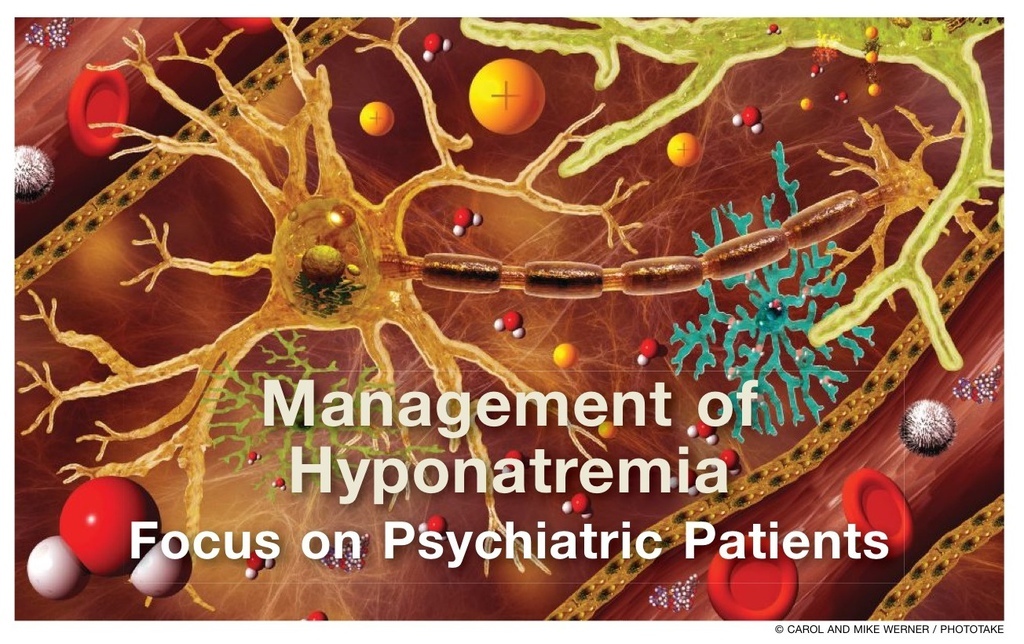 ABSTRACT: Hyponatremia, the most commonly encountered electrolyte disorder in clinical practice, is associated with increased mortality. This harmful medical comorbidity is often overlooked and untreated in psychiatric patients. In these particular patients, hyponatremia is associated with psychogenic polydipsia. Successful treatment depends upon accurate diagnosis of the severity and underlying etiology along with appropriate tests and monitoring. Hyponatremia induced by SIADH (syndrome of inappropriate antidiuretic hormone secretion) and psychogenic polydipsia require significant pharmacist interventions and are frequently seen in psychiatric patients.

Hyponatremia, defined as serum sodium (Na+) <136 mmol/L, is the most commonly encountered electrolyte disorder in clinical practice and is associated with increased mortality.1,2 In addition, hyponatremia is a frequently undiagnosed and untreated medical comorbidity in psychiatric patients.3,4 Successful treatment of hyponatremia depends upon accurate diagnosis of the severity and underlying etiology along with the appropriate tests and monitoring.5

Hyponatremia is seen in about 4% of patients with chronic schizophrenia and occasionally in patients with other psychiatric disorders.2 Primary polydipsia is prominent in patients with psychosis, affecting nearly 7% of patients with schizophrenia. In addition to the underlying psychosis, psychotropic drugs may cause the sensation of a dry mouth, which may contribute to increased water intake.8 Thus, causality between psychotropic agents and hyponatremia has been shown more persuasively with antidepressants and mainly with selective serotonin reuptake inhibitors (SSRIs). The incidence of hyponatremia caused by SSRIs varies widely, from 0.5% to 32%.4 In the majority of cases, hyponatremia occurs within the first few weeks of the onset of therapy, whereas normonatremia is achieved within 2 weeks after drug withdrawal.4

Hyponatremia caused by SIADH is due to increased release of antidiuretic hormone (ADH). SIADH has been associated with many drugs often used in psychiatric patients, including nicotine, barbiturates, carbamazepine, antipsychotics, and antidepressants.9

The mechanism by which hyponatremia develops varies according to disease state, and arginine vasopressin (AVP) regularly plays a critical role in both hypervolemic and euvolemic hyponatremia. In healthy individuals, the mechanism for free water excretion is due to AVP suppression caused by a fall in plasma osmolality.10 However, patients with hyponatremia are unable to suppress AVP due to true volume depletion, effective volume depletion, or an inappropriate increase in AVP secretion.11,12 AVP is produced in the hypothalamus and then transported and stored in the posterior pituitary gland. Physiologically, AVP targets three receptors, V1A (vascular), V2 (kidney), and V3 (pituitary).10 Antagonizing the V2 receptors in the kidney promotes aquaresis (elimination of solute free water).13 In SIADH, AVP release is increased despite plasma osmolality, which can be due to various medications (TABLE 1).14-17 In hypervolemic hyponatremia induced by congestive heart failure (CHF), the reduction in cardiac function causes ineffective arterial circulation; therefore, AVP is upregulated to induce cardiomyocyte hypertrophy and vasoconstriction via V1A and to enhance renal water retention via V2 as compensatory mechanisms. In cirrhosis-induced hypervolemic hyponatremia, the reduced arterial pressure is due to peripheral vasodilation resulting in low intravascular oncotic pressure, which causes an upregulation of AVP receptors.13 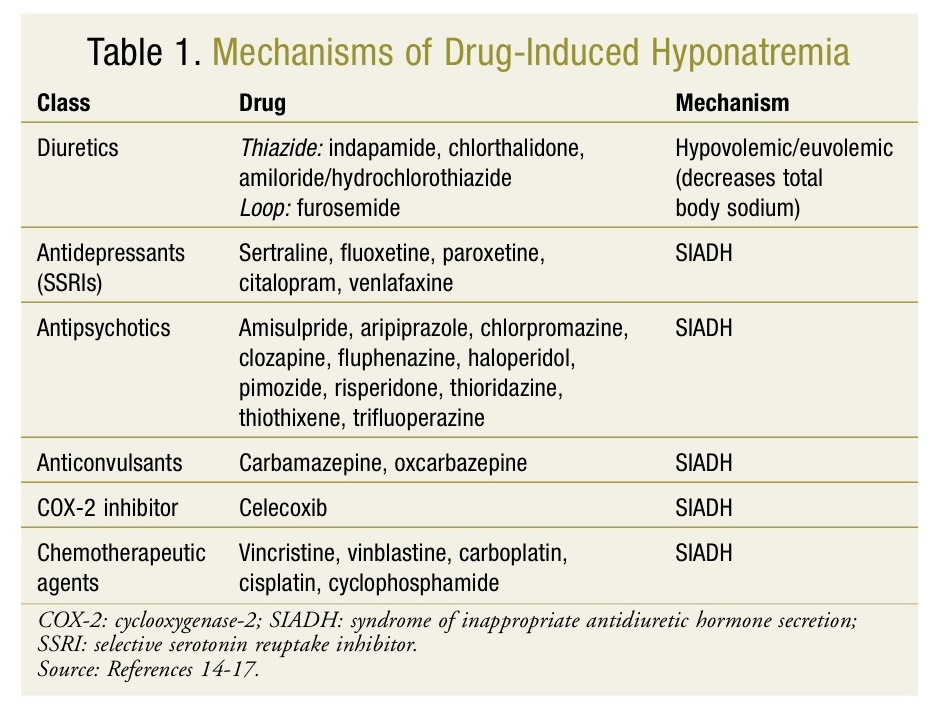 The pathogenesis of psychogenic polydipsia is multifactorial, with an abnormal hypothalamic thirst center as a likely cause. Patients tend to have a difference in the set points of ADH and thirst suppression. They present with polydipsia even when ADH is fully suppressed.18

Alcohol abuse is common in psychiatric patients, and often these patients present with hyponatremia. Beer drinkers (potomania) and other malnourished patients often have reduced ability to excrete free water based on low solute intake.19 In order to maximize the kidney’s ability to excrete free water, a basic level of solute intake is required. The result is markedly impaired free water excretion. Such patients develop hyponatremia with low urine osmolality (<100 mOsm/kg).19

The fundamental criteria considered when diagnosing hyponatremia are plasma osmolality, urinary electrolytes, volume status, fractional excretion of sodium (FeNa), and the ability to rule out hypothyroidism and glucocorticoid deficiency.20

Hypovolemic hyponatremia is usually seen in patients presenting with severe diarrhea or vomiting and urine sodium values <30 mmol/L.6 In euvolemic patients, hyponatremia is most often due to SIADH, and patients typically have urine sodium levels >40 mEq/L. Patients presenting with SIADH are usually asymptomatic unless the sodium level is below 120 mEq/L.7 Free water excretion is impaired in SIADH, as evidenced by urine osmolality levels >100 mOsm/kg.12

SIADH is often a diagnosis of exclusion. When differentiating between SIADH and psychogenic polydipsia, it is important to measure serum sodium, osmolality, and urine osmolality (TABLE 2).21 Early diagnosis and monitoring of symptoms are important for reducing the morbidity and mortality associated with hyponatremic encephalopathy.6 Patients with psychogenic polydipsia may present with impaired mental status and further exacerbation of psychiatric symptoms.22 Patient symptoms may include urinary incontinence, including enuresis.21

The treatment of hyponatremia involves the removal of free water, treatment of underlying causes, and use of saline infusion.23 Treatment is further strategized by the severity, which depends on the sodium level, time to development, and patient symptoms.7 Treatment of severe hyponatremia should take place in a critical care setting with isotonic or hypertonic fluids and frequent monitoring of serum sodium in order to ensure a safe rate of sodium correction.1,7 Treatment of mild-to-moderate hyponatremia should focus on treating the underlying cause, and further therapy considerations are dependent on the etiology.

An important clinical pearl is to correct the sodium level by no more than 12 mEq/L in 24 hours or 18 mEq in 48 hours. This is done in order to prevent the life-threatening complication known as osmotic demyelination syndrome (ODS), which is characterized by cerebral edema.24

Euvolemic Hyponatremia: Euvolemic hyponatremia caused by thiazide diuretics, SIADH, or psychogenic polydipsia requires the most pharmacist intervention. A recent clinical trial showed that 8.5% of patients presenting to the emergency room used one diuretic, 2.5% used two, and 0.4 % used three or four, and of those, 4% had hyponatremia on admission.25

Thiazide-induced hyponatremia occurs most frequently in elderly woman and usually develops within 2 weeks of therapy initiation.16 Thiazide diuretics cause hyponatremia by blocking sodium reabsorption in the distal tubule and causing proportionally more sodium loss than water. Treatment involves discontinuing thiazide diuretic therapy. Pharmacists play a key role in identifying thiazide-induced hyponatremia and ensuring that there is proper documentation and that reinitiation of thiazide therapy does not occur in the future.16

Pharmacists also play an important role in recognizing which drugs cause euvolemic hyponatremia induced by SIADH (see TABLE 1).14-17 Management of drug-induced SIADH involves removal of the offending agent and providing supportive care based on the severity of hyponatremia. Treatment of chronic asymptomatic hyponatremia induced by SIADH includes removal of the offending agent, water restriction, and then consideration of the initiation of vaptan therapy. Other pharmacologic options include demeclocycline, lithium, and urea.6 The use of these drugs is currently limited in practice due to their adverse-effect profiles, including renal toxicity. Of these agents, demeclocycline is best tolerated, and if initiated should be dosed at 600 to 1200 mg/day in divided doses.6

With respect to SSRI-induced SIADH, cross-sensitivity among agents has been reported, but published data are scarce.17 A different SSRI may be initiated, but practitioners should be cautious and monitor serum Na concentrations at baseline and 1 to 2 weeks after initiation of therapy.17

With antipsychotics, it is important for healthcare practitioners to differentiate between drug-induced SIADH and psychogenic polydipsia. Current treatment of psychogenic polydipsia includes reducing fluid intake, behavioral modification, and pharmacologic therapy in an attempt to decrease thirst.6

Atypical antipsychotics such as clozapine and risperidone have been shown to be effective in treatment of psychogenic polydipsia in case reports.26,27 A study published in 2011 showed that acetazolamide may also be an effective treatment option where 4 out of 5 patients treated with acetazolamide showed improved polydipsia and/or hyponatremia.28

Vaptan Therapy: Vaptans are AVP receptor antagonists that are used for the treatment of hypervolemic and euvolemic hyponatremia.29 The FDA-approved vaptans are conivaptan (Vaprisol) and tolvaptan (Samsca). Conivaptan is available in IV form and antagonizes V1 and V2 vasopressin receptors.30 The removal of free water happens by antagonizing the V2 receptors in the kidney.13,24 It is dosed at 20 mg IV once over 30 minutes, then 20 mg IV over 24 hours for 2 to 4 days. It is not advisable to use conivaptan for more than 4 days and in patients with creatinine clearance (CrCl) <30 mL/min.30 Additionally, conivaptan should not be used in patients with cirrhosis because of its inhibition of V1 receptors, which could exacerbate splanchnic vasodilation and interfere with platelet aggregation, promoting variceal bleeding.13,24,30 Conivaptan is a CYP3A4 enzyme inhibitor and therefore has many drug interactions.24 Pharmacists should educate prescribers on appropriate use of vaptans.

Tolvaptan is an FDA-approved oral vaptan.31 It selectively binds to the V2 receptors of the distal nephron, promoting the excretion of free water. Although it is an oral agent, tolvaptan has to be initiated in an inpatient setting and then continued on an outpatient basis.31 It is dosed at 15 mg daily and may be increased to 30 mg after 24 hours, then to a maximum of 60 mg daily for up to 30 days. Use should be avoided in CrCl <30 mL/min.32

In January 2013, the FDA published a new black box warning that tolvaptan is associated with a potential risk of liver injury.31 It is recommended that providers perform prompt liver tests in patients who present with symptoms indicative of liver failure, including fatigue, anorexia, right upper abdominal discomfort, or jaundice. If hepatic injury is suspected, tolvaptan should be discontinued and appropriate treatment of liver injury initiated. Tolvaptan should not be reinitiated in these patients unless the cause of the liver injury was determined to be unrelated to tolvaptan.31

Although vaptan therapy may be used for hypervolemic and euvolemic hyponatremia, its use has not been shown to have any effect on morbidity or mortality in clinical trials.33-38 These medications are relatively expensive and require strict monitoring, resulting in a potential burden on healthcare resources. Since vaptans play a critical role in last-line treatment of hyponatremia, it is of paramount importance that facilities ensure proper utilization and monitoring of therapy.

Careful observation is required to expedite the recognition of hyponatremia across the spectrum of psychiatric disorders. Compulsive water consumption may impair mental status and further exacerbate psychiatric symptoms.22 Urinary incontinence, including enuresis, is a possible sign of underlying polydipsia.21 The measurement of serum osmolality is central to the assessment of a patient with documented hyponatremia.21 When a patient presents with these signs and symptoms, pharmacists can intervene and rule out excessive water intake and medications associated hyponatremia. When psychogenic hyponatremia is suspected, the pharmacist can confirm causation by requesting a basic metabolic panel. Thus, the pharmacist plays a vital role in the interdisciplinary team in providing management of hyponatremia in psychiatric patients. 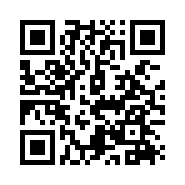